The Kremlinology (Ha!) of the Sessions’ Huddle

A lot of people were startled by the report of Rod Rosenstein commenting on Friday that Matt Whitaker is a “superb” choice to be Acting Attorney General.

Deputy Attorney General Rod Rosenstein on Friday hailed acting Attorney General Matthew Whitaker as a “superb” choice to fill the role even as Whitaker’s past statements have prompted questions about his impartiality toward special counsel Robert Mueller’s investigation.

“I think he’s a superb choice for attorney general,” Rosenstein told a small group of reporters gathered outside of an investiture ceremony for US Attorney Zachary Terwilliger in Alexandria, Virginia. “He certainly understands the work, understands the priorities of the department.”

When asked about the Mueller probe at the same event, Rosenstein walked away.

Aside from reports that Rosenstein and Whitaker hate each other (indeed, the effort to fire Rosenstein in September was significantly hatched by Whitaker), there’s reason to believe Rosenstein was just flattering his new boss. The speech at which he made these comments included a comment not just mentioning Marbury versus Madison — the cornerstone of judicial review in this country, which Whitaker has said was wrongly decided — but mentioning it in the context of having the proper paperwork to serve as an official of DOJ.

Virginia’s claim to Chief Justice Marshall as the first U.S. Attorney is quite a distinction. But it is not entirely accurate. Now, it is literally true that John Marshall was appointed U.S. Attorney by President Washington. But he never actually served as U.S. Attorney.

In fact, Marshall responded to the President with a letter of his own. Marshall wrote, “[T]hank you … very sincerely for the honor … [but] I beg leave to declare that … with real regret[,] I decline ….”

Washington replied with yet another letter. He wrote, “As some other person must be appointed to fill the Office of Attorney for the district of Virginia, it is proper your Commission should be returned to me.” He wanted the document back!

Perhaps that explains why, when the case of Marbury versus Madison came along in 1803, Chief Justice Marshall focused so intently on the importance of the signed commission.

Still, two days after Whitaker’s appointment, Rosenstein offered effusive and public flattery at a time of great uncertainty over events of the last week.

Rod Rosenstein has not survived as a senior DOJ official for thirteen years, through three presidential administrations and serving both parties, without knowing how to flatter his bosses. And I suspect, in this case, those skills may serve the country well.

Consider some details in this important CNN report, describing how and with whom, after John Kelly asked Jeff Sessions for his resignation on Wednesday morning, the Attorney General of the United States huddled, talking strategy.

John Kelly, the White House chief of staff, asked Sessions to submit his resignation, according to multiple sources briefed on the call. Sessions agreed to comply, but he wanted a few more days before the resignation would become effective. Kelly said he’d consult the President.

Soon, the sources say, top Justice officials convened on the 5th floor suite of offices for the attorney general.

With the exception of O’Callaghan, all of those men outranked Whitaker so long as Sessions officially remained Attorney General. We don’t actually know when his tenure ended. Sessions’ resignation letter is not dated, much less time-stamped; while Sessions may not know how to date important letters like this, Rosenstein and O’Callaghan surely do, but somehow it did not get dated.

Judges and Justices, Rosenstein would point out two days later, “focus[ ] intently on the importance of the signed commission.”

We do know that when Trump tweeted about Whitaker’s appointment at 2:44 PM, he used the future tense — “will become,” not “is” — to describe Whitaker’s tenure as Attorney General. 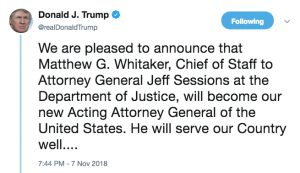 So for the sake of this Kremlinology, I will assume that Sessions remained Attorney General for the remainder of the day on Wednesday. That means that, for at least a half day after this went down, any orders he gave were binding and all those men huddling with him on Wednesday morning retained the relative seniority to Whitaker that they started the day with.

As CNN says in its report, the people huddling with Sessions included key players overseeing Mueller’s probe. Rosenstein and O’Callaghan provide the day-to-day oversight of the probe.

That day-to-day oversight is critical both to any claim that Mueller operates with constitutional authority and to any effort by Trump and Whitaker to undermine Mueller’s authority.

But CNN doesn’t talk about the important role played in the probe by the other two Senate-confirmed figures in the room, Solicitor General Noel Francisco and OLC head Steven Engel.

As Michael Dreeben, who formally reports to Francisco, noted Thursday (that is, the day after this huddle) during his DC Circuit argument defending the constitutionality of Mueller’s authority, Francisco must approve any appeal Mueller’s team makes (presumably, he must approve any appellate activity at all). The arguments Dreeben made publicly Thursday — as well as whatever arguments Mueller submitted in a brief in sealed form in the Mystery Appeal that same day — were arguments made with the approval of and under the authority of the Solicitor General, the third ranking official at DOJ.

Then there’s Engel. He’s the guy who decides, in response to questions posed by Executive Branch officials, how to interpret the law for the entire Executive Branch. It’s his office, for example, who would decide whether it would be legal for Mueller to indict the President. His office also interprets the laws surrounding things like the Vacancies Reform Act, whether any given presidential appointment is legal.

Which is why this passage of the CNN report is so significant.

At least one Justice official in the room mentioned that there would be legal questions about whether Whitaker’s appointment as acting attorney general is constitutional.

In a room of men huddling with Jeff Sessions at a time he undeniably retained authority as Attorney General, at least one person — it might though is unlikely to be Sessions, it might be the Solicitor General who would argue the case legally, it might be the Deputy Attorney General or his deputy overseeing the Russian probe, it might be the guy who ultimately decides such things, or it might be several of them — at least one of those senior DOJ officials raised questions about whether Whitaker’s appointment would be constitutional. All of those men are sufficiently senior to ask Engel to write up a memo considering the question, and so long as Sessions retained the authority of Attorney General, he could decide whether to accept Engel’s advice or not. Sure, the President could override that (Obama overrode OLC, to his great disgrace, in Libya). But Trump would be on far shakier legal ground to do so without OLC’s blessing, and anyone operating in defiance of the OLC opinion could face legal problems in the future.

And an OLC opinion is precisely the kind of thing that Mueller’s team might submit to the DC Circuit — under the authority of the Senate approved and third-ranking Noel Francisco — in a sealed appendix to a challenge to Mueller’s authority.

I asked around this morning, of both those who think Whitaker’s appointment is not legal and those (like Steve Vladeck) who think it is. And it seems crystal clear: if Whitaker’s appointment is illegal, then that is a disability (just like recusal would be), and the regular DOJ succession would apply. In that case, the Deputy Attorney General would be acting Attorney General, for all matters, not just the supervision of the Special Counsel.

I don’t pretend to know what happened in that huddle or in the half day afterwards when Jeff Sessions uncontestedly retained his authority as Attorney General. I do know the rising House Judiciary Committee Chair has demanded that the paperwork behind it be preserved.

But I’m not really bugged that Rod Rosenstein is doing what he needs to do to remain the person who, if Whitaker’s appointment were illegal, would serve as the Acting Attorney General.

Update: Two more details I should have added in this post.

First, this meeting feels a lot like the ones in response to the 2004 Hospital Hero crisis, which was not just a fight about surveillance, but also about President’s abusing DOJ succession. That suggests the two different huddles at DOJ represent two different camps of loyalty. If that’s right, we might assume those officials in with Sessions might resign (or threaten to) if asked to do something they believed to be illegal. That would mean people with the analogous job titles as threatened to quit in the 2004 crisis — DAG, PDAAG, and SG — might threaten to quit here. Chris Wray would be the analogue to Robert Mueller in this situation; while he’s not reported to be involved on Wednesday, he was reportedly among those ready to quit in 2004.

Additionally, there have been worries about what would happen if Noel Francisco assumed oversight of the Mueller probe (which is what would have happened if Trump fired Rosenstein rather than replaced Sessions). That he was in the group trying to preserve the Mueller probe suggests he may be more supportive of it than people have assumed; remember, on top of approving Mueller’s appeals, he has been brought in at other key points.

So this Kremlinology also suggests there may be more resilience among top officials than assumed, as well.

Update: Fixed that “supervision of the Attorney General” phrase as noted by several in comments. Thanks!

Did Emmet Flood Mean to Create a Legal Morass, or Is He Off His Game? In Defending His Whitaker Pick, Trump Attempts to Placate Both Republicans and...