In the New Republic, I have a piece expanding on what I laid out in my first post on last week’s BuzzFeed story. It should not have been a big deal that BuzzFeed claimed Trump had “directed” Michael Cohen to lie, because we already had plenty of evidence that Trump had induced his top aides to lie. In it, I note an even more clear cut example of Trump scripting his aides’ lies with the June 9 meeting.

Then last June, the Times published a January 2018 letter in which Trump’s lawyers admitted to Mueller’s office that “the President dictated a short but accurate response to the New York Times article on behalf of his son, Donald Trump, Jr.” The letter tied that statement directly to Don Jr.’s testimony to Congress about the infamous Trump Tower meeting in 2016, in which Don Jr. sought to procure damaging information about Hillary Clinton from Russian agents. “His son then followed up by making a full public disclosure regarding the meeting, including his public testimony that there was nothing to the meeting and certainly no evidence of collusion.” Trump’s statement to the Times claimed there had been “no follow-up” after the June 9 meeting, and Don Jr.’s testimony to Congress sustained that claim. But the public record shows there was follow-up after the election.

And I suggest, later in the piece, that what we know happened with the June 9 meeting is probably what happened with Cohen’s Trump Tower story.

Mueller has hinted that Trump’s other subordinates were involved in just one of these lies: Cohen’s. In a filing describing how Cohen explained “the circumstances of preparing and circulating his response to the congressional inquiries,” Cohen suggested he coordinated with “White House-based staff and legal counsel to Trump.”

That’s what the public record shows happened with Cohen’s statements about the Trump Tower meeting, in which he falsely claimed there was no “follow-up.”

As I suggested, how that happened is already in the public record, in documents released by the Senate Judiciary Committee.

As early as June 3, 2017, Trump Organization lawyer Alan Garten called Rob Goldstone to find out details about the June 9, 2016 meeting, including who the Russian lawyer who attended was. On June 26, Garten contacted Goldstone again to find out about and get contact information for Ike Kaveladze. In a call with Goldstone the next day, Garten expressed “concern” because the June 9 meeting “links Don Jr. to officials from Russia, which he has already denied meeting.”

On July 8, the White House put out a Trump (and Putin) statement claiming the meeting was only about adoptions, and therefore didn’t include any topic that was a campaign  issue. As part of that statement, Trump claimed that “there was no follow-up.”

It was a short introductory meeting. I asked Jared and Paul to stop by. We primarily discussed a program about the adoption of Russian children that was active and popular with American families years ago and was since ended by the Russian government, but it was not a campaign issue at that time and there was no follow up. I was asked to attend the meeting by an acquaintance, but was not told the name of the person I would be meeting with beforehand. [my emphasis]

On July 9, Don Jr put out his own statement, admitting that Goldstone had also offered dirt and that Magnitsky sanctions were discussed, but repeating that “no follow-up” line (as well as telling some other lies).

I was asked to have a meeting by an acquaintance I knew from the 2013 Miss Universe pageant with an individual who I was told might have information helpful to the campaign. I was not told her name prior to the meeting. I asked Jared and Paul to attend, but told them nothing of the substance. We had a meeting in June 2016. After pleasantries were exchanged, the woman stated that she had information that individuals connected to Russia were funding the Democratic National Committee and supporting Ms. Clinton. Her statements were vague, ambiguous and made no sense. No details or supporting information was provided or even offered. It quickly became clear that she had no meaningful information. She then changed subjects and began discussing the adoption of Russian children and mentioned the Magnitsky Act. It became clear to me that this was the true agenda all along and that the claims of potentially helpful information were a pretext for the meeting. I interrupted and advised her that my father was not an elected official, but rather a private citizen, and that her comments and concerns were better addressed if and when he held public office. The meeting lasted approximately 20 to 30 minutes. As it ended, my acquaintance apologized for taking up our time. That was the end of it and there was no further contact or follow-up of any kind. My father knew nothing of the meeting or these events. [my emphasis]

That’s when Goldstone — who had been on a cruise in Europe and so out of the loop — got angry that, after having asked for advance warning a week earlier, was now fielding calls from the press without first knowing what Trump had put out.

I had requested last week of you guys to see what was being put out, so I could be able to prepare our own statement but never received anything from you or your colleague. Can I please at least now see the statement you guys put out.

Goldstone wanted that statement, he explained to SJC, so he could match what Trump put out. “I just felt it would be useful if I knew what they had put out, the style, the type.” He wasn’t so much looking to coordinate; he was just trying to message effectively. “This — this  was area was really alien to me. I’m a music publicist. We talk about ego and nonsense. I’m not used to this kind of structured world.”

Then, on July 10, both Alan Futerfas and Alan Garten sent Goldstone a statement they wanted him to put out under his own name. It included the claim that there had been no follow-up.

As the person who arranged the meeting, I can definitely state that the statements I have read by Donald Trump Jr. are 100 percent accurate. The meeting was a complete waste of time, and Don was never told Ms. Veselnitskaya’s name prior to the meeting. Ms. Veselnitskaya mostly talked about the Magnitsky Act and Russian adoption laws, and the meeting lasted 20 to 30 minutes at most. There was never any follow-up and nothing ever came of the meeting. [my emphasis]

Goldstone told SJC he thought the “ludicrous” because it sounded nothing like him, and so kept trying to put out his own statement.

But (as SJC made clear in questions about the statement) the two Trump Organization Alans, who had been chasing down what happened at this meeting for over a month by the time they drafted a statement for Goldstone, had to have known that the statement they wanted Goldstone to adopt was partly incorrect (in spite of their exhortations that any statement be accurate). That’s because they would already have reviewed an email Goldstone sent to Rhonna Graff the previous fall. 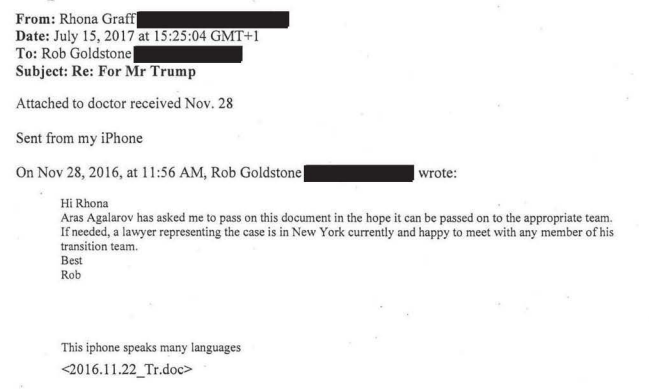 On November 28, after ten days of efforts to set up another meeting for Veselnitskaya after the election and on directions that almost certainly had to have come from Don Jr, Goldstone sent Veselnitskaya’s latest statement on sanctions to Trump’s Assistant, Rhona Graff. On July 15, 2017, after Trump and Don Jr had already issued statements claiming there had been no follow-up to the meeting — and after Trump’s lawyers tried to get Goldstone to say that publicly, too — Graff forwarded Goldstone’s email back to show that there had, in fact, been follow-up.

Nevertheless, almost two months after Graff identified this proof of follow-up (there are also some calls between Don Jr and Goldstone that are in some ways even more damning, though Goldstone disclaims them), Don Jr continued to hew to the family line that there had not been follow-up.

Even in response to a direct question about it, Don Jr insisted there had been no follow-up,

Q. There was, in your view, no follow-up at all from this meeting?

And then Don Jr repeated that lie — there was no follow-up at all from this meeting — in September 2017, sustaining the lie his father first told, only this time to Congress, where it counts as a criminal false statement.

Last week, people on both sides of the aisle treated the BuzzFeed story as the first evidence that Trump had suborned false statements. It’s not. We’ve seen how he does so in very detailed form already.

Jerome Corsi’s Gazillion Dollar Lawsuit Against the Same Media Targets... It’s Not So Much that Manafort Lied and Lied and Lied, It’s that...