Friday, the government responded to Chelsea Manning’s request to be freed in light of Julian Assange’s superseding indictment, in which she argued the grand jury couldn’t use any of her testimony to shore up the existing indictment against Assange.

The government has now indicted Mr. Assange on 18 very serious counts, without the benefit of or apparent need for Ms. Manning’s testimony. The government’s extradition packet must be submitted in finalized form very soon. Any investigation of him after that point will be nugatory. United States v. Moss, 756 F.2d 329, 331-32 (4th Cir. 1985), see also United States v. Kirschner, 823 F. Supp. 2d 665, 667 (E.D. Mich. 2010)(finding that posti-ndictment questioning about the same conduct but different charges than those in the indictment was permissible, but questioning leading only to further information about the same charges would be impermissible). Any further investigation of unindicted targets will likewise be futile, as charges would be time-barred, and in any case, it is perfectly understood that Ms. Manning has no useful information about any parties other than the person behind the online handle “pressassociation.” She is not possessed of any that is not equally available to them, and in any case, her absence has posed no obstacle to indictment and superseding indictment.

The government response suggests this assertion — that there are no charges that they need Manning’s testimony for — is incorrect.

As the government’s ex parte submissions reflect, Manning’s testimony remains relevant and essential to an ongoing investigation into charges or targets that are not included in the superseding indictment. See Gov’t’s Ex Parte Mem. (May 23, 2019). The offenses that remain under investigation are not time barred, see id., and the submission of the government’s extradition request in the Assange case does not preclude future charges based on those offenses, see Gov’t’s Supplement to Ex Parte Mem. (June 14, 2019). Manning’s speculations about the direction of the grand-jury investigation, the purpose of her testimony, and the need for it are insufficient to show otherwise. [My emphasis]

The formulation here is curious, for the reasons laid out below.

Not time barred: Assange was first indicted on March 6, 2018, two days short of the 8-year anniversary of the alleged attempt to crack a password that was the basis for the conspiracy to violate CFAA charge. That suggests they were relying on the claim that the international character of the alleged CFAA charge extended the SOL to eight years, though they could also claim the conspiracy was ongoing if both Manning and Assange were believed to continue to engage in a conspiracy (though given that the conspiracy was defined as hacking, it would seem to be limited to the time until Manning’s arrest on May 27, 2010). I think — but am not sure — that if further charges are not time-barred, the government is either relying on a continued conspiracy, perhaps based off the conspiracy to receive national defense information in the superseding indictment, which because it was charged under espionage has a ten year statute of limitations, or arguing that the conspiracy to violate CFAA extended to other people.

Possibility of additional charges “based on those offenses”: To continue to coerce Manning for charges pertaining to Assange, the government has to argue (and claims it has, in two ex parte filings) that it is seeking additional charges. If I understand how the UK’s extradition process works, unless it gets a waiver, the US government can’t add additional crimes against Assange on top of what it already charged in the extradition packet, but some people say it’s possible to add on instances of the same charges until such time as he’s extradited. That may mean it wants to lard on espionage charges.

Targets not included in the superseding indictment: Manning claims she only has information about “pressassociation” — that is, Assange. But the government may believe there are other people involved in this. It would be unsurprising if the government were homing on other key WikiLeaks figures (I’ve had people wonder whether the government would go after Jake Appelbaum, for example, and there’s another figure people have been chatting about). Recall, too, that the government interviewed David House during this process, extending the time frame and the actions to publicity to supporting Manning that would extend into the period when she was jailed and prosecuted.

Charges not included in the superseding indictment: If there are other people the government is targeting for crimes the statutes of limitation for which haven’t expired (or as part of the conspiracy including Assange and Manning in any kind of continuation), then the government could just charge them.

All that said, there’s something funny with the timing. Manning’s request suggested that Assange was charged sometime between May 14 and 16 — which would put it after she got the subpoena from the new grand jury but before a court hearing on May 16.

Some time between May 14 and May 16, 2019, Julian Assange was charged in a superseding indictment with 17 Counts relating to offenses under the Espionage Act. This indictment was also obtained without the benefit of or apparent need for Ms. Manning’s testimony.

The government corrected that in their response.

Manning claims that Assange was charged in the superseding indictment at some point “between May 14 and May 16, 2019.” Mot. to Reconsider Sanctions 2. That representation is inaccurate. The face of the indictment reflects that it was returned in open court on May 23, 2019, and the signature page bears the same date. See Superseding Indictment, United States v. Julian Paul Assange, No. 1:18-cr-111-CMH (E.D. Va. May 23, 2019) (Dkt. No. 31) (Exhibit B).

Meanwhile — perhaps to show that it had briefed Judge Anthony Trenga about the ongoing investigation before he approved the current contempt finding — the government also unsealed a bench memo submitted back on May 15. That memo also argued they still needed Manning’s testimony — but it was based on the 1-count indictment against Assange.

This indictment against Assange does not affect Manning’s obligation to appear and testify before the grand jury. Under the law, the government cannot use grand jury proceedings for the ‘sole or dominant purpose’ of preparing for trial on an already pending indictment.” United States v. Alvarado,840 F.3d I E4, lE9 (4th Cn. 2016) (quoting United States v. Moss,756 F.2d329,332 (4th Cir. l9E5)). Yet it is equally well settled that, even after returning an indictment, the grand jury may continue investigating new charges or targets that are related to the pending indictment, See id at I89-90; United States v. Bros. Co$t/. Co. of Ohio,2l9 F.3d 300, 314 (4th Cir. 20OO); Moss,7 56 F .2d at 332. At the same time it files this memorandum, the government is filing an ex parte pleading that describes the nature of the grand jury’s ongoing investigation in this matter. See Gov’t’s Ex Parte Submission Regarding Nature of Grand-Jury Investigation (May 14, 2019). As that filing reflects, Manning has testimony that is directly relevant and important to an ongoing investigation into charges or targets that arc not included in the pending indictment. See id. Thus, the recently unsealed indictment against Assange does not provide Manning with just cause for refusing to comply with the Court’s order to testify in front of the grand jury.

That said, they’ve updated that argument in sealed form. As bolded above, though, the government has briefed the court three times on why it still needs Manning’s testimony:

One final point. In the May 15 bench memo, the government discounts Manning’s objections to grand juries (appealing to how they’re supposed to work rather than how they do), and then insinuates she’s refusing to testify out of self-interest. 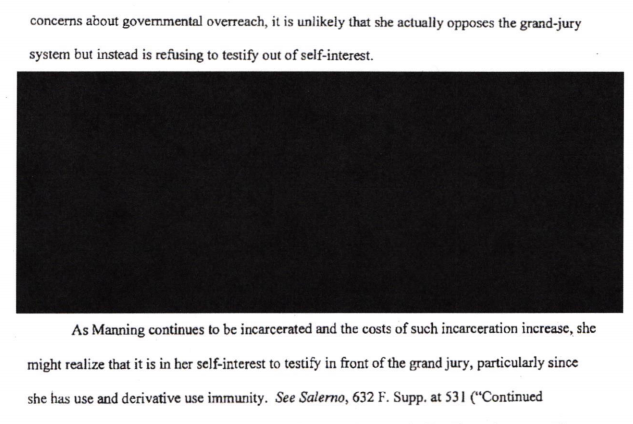 Which is to say the government has some notion of Manning’s motives that — aside from being placed amid a discussion that demonstrably fails to understand her claims about grand juries — they imagine she’s doing all this to benefit herself. That may be true. It may be, for example, that testifying about what she now understands to have happened nine years ago would change the public understanding of what she did. But the government is not willing to share what that is.

A New Form of Victim Blaming: Demanding that Rat-Fucker Roger Stone Get to Learn... Roger Stone Describes 67% of the Content of Sealed Warrant Affidavits for His...