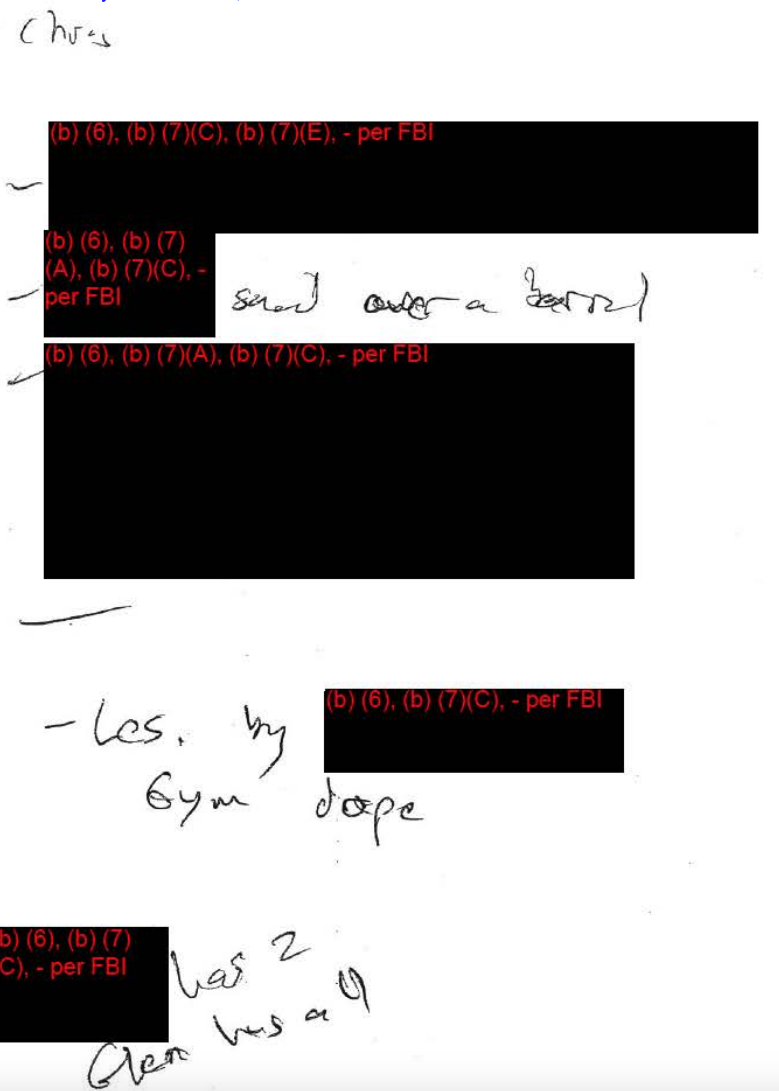 Last night, Judicial Watch (and DOJ) released some of the FD-302s (FBI interview reports) between Bruce Ohr and the FBI. This post will lay out what they include.

As a reminder, Ohr is a top DOJ expert on Russian organized crime. He has known Christopher Steele since 2007 and Ohr’s wife — who is an expert on Russia — did some work for Fusion GPS during the election that was related to, but not part of, Steele’s work for Fusion. Ohr and Steele had conversations in 2016 about a range of things, including Oleg Deripaska (for whom Steele was doing work and who Steele trusted far more than he should have), Russian doping, and Trump’s ties to Russia.

Starting on July 30, 2016 and continuing through November 2017, Steele shared first his Trump-related information with Ohr, and then his concerns about how his dossier was all blowing up, including his concern for at least one of his sources. After Steele was cut off as a paid source in November 2016, FBI had Ohr communicate with a Supervisor [note, this was incorrectly reported as Bill Priestap when JW released these], who was a top counterintelligence person at FBI, whenever he spoke with Steele as a way to stay in touch with the former British intelligence officer, at first as part of vetting the dossier, and later to monitor where he was at.

This release of 302s is partial (though that’s based on Judicial Watch’s request, not FBI’s response). It doesn’t include any record of Ohr’s conversations with FBI and DOJ prior to November 22, 2016 (which include at least an early August meeting with Andrew McCabe and Lisa Page and a fall meeting with Page, Peter Strzok, Andrew Weissmann, Zainab Ahmad, and Bruce Swartz). It also doesn’t include Ohr’s communications after May 2017. Thus, it explicitly would exclude any information about how Mueller treated the dossier, details of what FBI and Steele did to try to limit Congress’ investigation into the role of the dossier, and whether and how FBI investigated possible false statements from Steele and (especially) Glenn Simpson.

In addition, while DOJ already released a lot of the backup to this (including Ohr’s communications with Steele and Simpson and some but not all of his notes), Judicial Watch has apparently not posted something DOJ already provided them, which is a file “Manafort Chronology” that JW received in an earlier lawsuit (I’ve asked JW for that file; they say they’re still processing it, even though they received it before these 302s). That document would presumably make it clear (as if the investigative team Ohr met with didn’t already) that more of what Ohr passed on to FBI from Steele before the election would pertain to Manafort, not Carter Page.

These meetings covered by the 302s seem to be broken into three groups:

This meeting was obviously an introductory meeting between Ohr and the Agent. He describes how he first met Steele (which partly redacted here but not redacted in his testimony to HJC/OGR). There’s a redacted comment that probably reflects Ohr’s view of Steele’s sources. That probably pertains to one or more oligarchs, because Ohr then explains his own opinion about the willingness of oligarchs to share information; this paragraph has been redacted because of an ongoing investigation, as has the paragraph describing Ohr’s summary of his meeting with Steele in July 2016 (which Ohr told McCabe about within days). There’s a reference to these notes from July (see PDF 31) 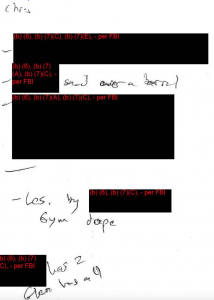 When these notes were released in December 2018, both the source for the “over a barrel” comment and Deripaska’s threats against Manafort were protected for ongoing investigation; at least in this paragraph, some of both are unsealed.

Ohr then explains what he knew about the Fusion GPS oppo research project, including that Simpson was passing the information on to “many individuals or entities.”

It’s clear that Ohr was asked about Michael Isikoff’s Yahoo article on Carter Page. Ohr described meeting with Simpson and Steele around that time, but his focus was instead on the Alfa Bank server allegation, which I’l return to.

Pristap also must have asked Ohr whether Steele made up his allegations, which Ohr said he did not believe Steele had done. Ohr explained that “there are always Russian conspiracy theories that come from the Kremlin.” He stated that he believed that Steele was just reporting what he heard, “but that doesn’t make that story true.”

Ohr was also asked about Jon Winer and whether he knew how Steele handled his sources, as well as for contact information for someone, probably Steele.

Several weeks after the initial meeting, Priestap interviewed Ohr again with follow-up questions about the dossier. He appears to reveal that he never was present when Steele interviewed a source (though there was a meeting he described). He says he was never present for meetings between Steele and Jon Winer. He described his wife Nellie’s research for Simpson. And he explained that Simpson directed Steele to “speak to the press as that was what Simpson was paying” him to do. The Agent apparently asked if Steele went to David Corn on his own or at the direction of Simpson, which Ohr did not know the answer to.

At that meeting, Ohr handed over the “Manafort Chronology” (which may or may not be Nellie’s work), which is the document JW may not have released yet.

Ohr met with Simpson on December 10 and obtained a copy of the dossier on thumb drive, so met with the Agent to share that and his notes from that meeting (see PDF 32). 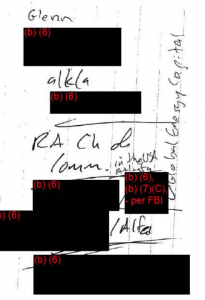 At the meeting, Simpson told Ohr the Michael Cohen allegations (though these should and do appear to be the dated October allegations). Simpson shared gossip about some former Trump person (he thought it was Rick Wilson, but Wilson denied it yesterday) who was concerned about Trump’s ties to Russia. He raised Aleksandr Torshin’s outreach to the NRA and shared this article on it, even while noting there was disagreement on his staff about how much money Russia was funneling to the NRA. Simpson disputed NYT’s doubts about the Alfa Bank server (either the Agent or Simpson got the date of the article wrong); in response to an Ohr question about whether he thought he was safe, Simpson said someone had called and “asked him to find out where all of the Alfa Bank stories were coming from.” Simpson told Ohr he still had concerns about Sergei Millian and noted, “Looking at Millian led Simpson’s company to Cohen” (which Simpson would later share with Congress).

Simpson admitted that he asked Steele “to speak to the Mother Jones reporter as  it was Simpson’s Hail Mary attempt.” Note this means that after the Agent asked Ohr who decided to contact Corn, Ohr asked Simpson, and then passed on the answer. From this point forward, Ohr was basically providing FBI information on the Fusion effort.

Finally, Simpson appeared to suggest that much of Steele’s reporting comes from one source but “Simpson does not know his name.” This also seems to be a question Ohr posed after having been asked about it by the Agent. There are almost entirely redacted notes at PDF 33 listing “possible intermediaries” attributed to Simpson, but it’s unclear if Ohr took those notes at that meeting.

Several weeks after he said he would do so, Ohr met with the Agent and shared Nellie Ohr’s research for Fusion on a thumb drive.

On January 20, Simpson contacted Ohr in a panic about one of Steele’s sources. The following day, Ohr and Steele spoke about the concerns. The description of those concerns are treated, among other redactions, as legally classified information. The description of what appears to be the person in Ohr’s notes released last year is protected as part of an ongoing investigation (PDF 34-35). One thing Steele told Ohr, though, was that he knew the person was alive and well because he had posted on Facebook.

On the January 21 call, Steele also told Ohr he had spoken with someone in John McCain’s office sometime “prior to October 2016.” Either he’s only telling Ohr part of the story, or the date is wrong, because Steele’s known contacts related to McCain were in December.

Several days later, Ohr reached out to the Agent again to update him on what Steele had said in a followup. In that call either Steele or Ohr suggested the person might be exposed because of journalists. (PDF 36)

A few weeks later, Steele called about two things. First, the firing of Sally Yates led him to believe he needed another contact in case Ohr was fired; the Agent asked Ohr to ask Steele if he’d feel comfortable going through the FBI. He also seemed to be passing on information from someone, probably Deripaska, complaining that because of the 2016 election the FBI considered him a “criminal.” There’s a redacted section, and all this redacted information is protected as an ongoing investigation.

At the same meeting, Ohr offered up that Kathleen Kavalec, who was briefing allies on possible Russian tampering in their elections, had also met with Steele several times before the 2016 election. Ohr said that she said Steele’s reporting was generated mainly from [redacted]; which either pertains to a named source or from a reporting source.

This was mostly a follow-up reporting on a February 11 FaceTime chat with Steele, though Steele described working for two attorneys, one of whom appears to be redacted as part of an ongoing investigation in Ohr’s notes (PDF 37). 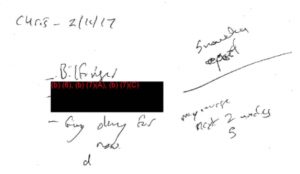 Ohr told the FBI he had not yet asked Steele if he’d be comfortable working through an FBI agent.

Note: There are March WhatsApp texts and written notes Ohr took with no corresponding 302. They pertain to Steele’s concerns about Congressional inquiries.

Ohr reported on a May 3 WhatsApp call with Steele, in which he expressed concerns about Congress’ scrutiny of his role. Steele also told Ohr that Simpson would be heading over to the UK soon and was lawyering up. But he still offered additional information to the FBI, if it was interested. Note, this is the first 302 where a normal listing of both interviewers is used, though there are indications elsewhere that the Agent was accompanied by someone else.

Ohr reports on a May 10 WhatsApp call in which Steele tells him the Senate Intelligence Committee is seeking information. The FBI asks Ohr to ask if Steele is willing to “have a conversation” with FBI agents in the UK, and Ohr agrees to pass it on.

After meeting with the FBI on May 12, Ohr contacted Steele to find out whether he’d be willing to talk to the FBI — “nothing more than a conversation with the FBI;” three days alter he said he would.

Steele also said he had information on a conversation between two people.

DOJ Should Just Give Andrew McCabe What He Wants, But They Won’t The Ohr 302 Exemptions