I’d like to point to three data points on Roger Stone, who is scheduled to go on trial on November 5, 364 days before the 2020 Presidential election.

Andrew Miller will testify against his former boss

First, Natasha Bertrand reported yesterday that Andrew Miller — the Roger Stone aide who fought a grand jury subpoena for a year — has been called as a government witness in Stone’s trial.

Andrew Miller, a longtime aide to Stone, received a subpoena in early August to appear as a government witness, said Miller’s lawyer, Paul Kamenar. Kamenar said he was “puzzled” as to why prosecutors wanted Miller as a government witness — he said earlier this year that he did not think Miller would be called — but confirmed that Miller plans to comply.

The result is that one of Stone’s closest aides will be testifying about him at his trial in November for lying to Congress about his dealings with WikiLeaks during the 2016 election. He has pleaded not guilty.

Miller worked with Stone for over a decade, managing his schedule and travel. Miller accompanied Stone to the Republican National Convention in 2016, meaning he might have insight into Stone’s activity around this time.

It’s clear that Miller’s lawyer doesn’t understand how his client’s testimony helps the government’s case. But it’s worth considering that we still don’t know how Roger Stone was learning of WikiLeaks’ plans. WikiLeaks claims they never spoke to him directly until later in the process, and Jerome Corsi does not appear to learn anything until weeks later (and I don’t rule out Corsi learning some of it from Stone, not vice-versa).

But, at least according to Michael Cohen’s testimony (which he suspects was corroborated by other sources), Stone called Donald Trump on either July 18 or 19 and told the candidate that WikiLeaks was about to drop a massive dump of emails that would damage Hillary’s campaign.

As I earlier stated, Mr. Trump knew from Roger Stone in advance about the WikiLeaks drop of emails. In July 2016, days before the Democratic Convention, I was in Mr. Trump’s office when his secretary announced that Roger Stone was on the phone. Mr. Trump put Mr. Stone on the speaker phone. Mr. Stone told Mr. Trump that he had just gotten off the phone with Julian Assange, and that Mr. Assange told Mr. Stone that within a couple of days, there would be a massive dump of emails that would damage Hillary Clinton’s campaign.

Mr. Trump responded by stating to the effect, Wouldn’t that be great.

Ms. WASSERMAN SCHULTZ. Roger Stone says he never spoke with Mr. Trump about WikiLeaks. How can we corroborate what you are saying?

Mr. COHEN. I don’t know, but I suspect that the special counsel’s office and other government agencies have the information that you are seeking.

Mr. COHEN. Yes. I’m sorry. I thought you were talking about a different set of documents that got dumped. So I was in Mr. Trump’s office. It was either July 18th or 19th. And, yes, he went ahead. I don’t know if the 35,000—or 30,000 emails was what he was referring to, but he certainly had knowledge.

Stone would have been calling from the RNC. It’s likely he learned about the emails not from Assange (he was just fluffing his value on that point), but someone whom he met with at the RNC — there has long been speculation this was Nigel Farage. Andrew Miller would be able to corroborate precisely who Stone was meeting before he called the candidate and gave him foreknowledge of the dump.

How Stone learned about WikiLeaks’ plans may be 404(b) information

Mind you, when and from whom Stone learned of WikiLeaks’ plans isn’t necessary to prove that he knowingly lied to the House Intelligence Committee in 2017.

But I suspect Miller’s subpoena comes after some sealed discussions in his case that started in June. On June 26, Judge Amy Berman Jackson permitted the government to file a 404(b) notice under seal as sealed docket item #139.

Then, on July 9, ABJ permitted Stone to file the response, as sealed docket item #143 (with two exhibits) under seal.

The Court grants defendant’s motion to file under seal but notes it may revisit the need for the seal after it has reviewed the materials more closely. The Clerk of Court is directed to file under seal [143-1] Defendant’s Response to Government’s Notice of Intention to Introduce Evidence Under Federal Rule of Evidence 404(b), [143-2] Exhibit A to the response, and [143-3] Exhibit B to the response.

On July 26, ABJ permitted the government to file, as sealed docket item #152 (with two exhibits) under seal as part of the motion in limine process deciding what will and will not be admitted.

There’s no sign of an order on 404(b) material (though there are other unexplained sealed docket items). But the fact that the government moved to pre-clear some newspaper articles as evidence under 404(b) may suggest ABJ has ruled.

Rule 404(b) governs whether or not you can introduce evidence that addresses character, other crimes, or other acts, beyond the scope of the indictment.

(2) Permitted Uses; Notice in a Criminal Case. This evidence may be admissible for another purpose, such as proving motive, opportunity, intent, preparation, plan, knowledge, identity, absence of mistake, or lack of accident. On request by a defendant in a criminal case, the prosecutor must:

(A) provide reasonable notice of the general nature of any such evidence that the prosecutor intends to offer at trial; and

(B) do so before trial — or during trial if the court, for good cause, excuses lack of pretrial notice.

It is often done to explain a defendant’s purported motive (as it was with Craig). So the government is seeking to provide other evidence of Stone’s rat-fuckery that is not, however, central to the charges against him, lying to Congress.

Which raises the question of what this 404(b) material might be and why it was submitted under seal. On the question of a seal, for comparison sake, the government sealed neither their request to submit evidence on Ukrainian procurement in Paul Manafort’s (aborted) trial under ABJ nor their request to submit evidence that Greg Craig was trying to curry favor with Manafort by hiring his daughter in the former White House’s (unsuccessful) prosecution under ABJ. Those weren’t hugely damning, sure, though the Craig detail was political damaging. Though this is obviously something more sensitive, either because the government still treats it as sensitive or because it would impair Stone’s ability to get a fair trial.

Details about how Stone learned of WikiLeaks’ plans would qualify as the former, and that’s something that Miller’s testimony is likely directly relevant to.

Details of how Stone kept candidate Trump informed of his plans at every step would qualify as the latter (and that’s a detail that is not spelled out in the indictment, even though it should have been).

Both would explain his motive to lie — whatever source he’s been hiding inside a nesting Matryoshka doll of lies constructed with Jerome Corsi, and the degree to which Donald Trump was pushing his rat-fucker to optimize the release of emails stolen by Russian military intelligence to help Trump get elected.

Aside from the detail that Miller’s accounting of Stone’s schedule at the RNC might explain who the source is, the rest of this is all speculative: these are possible answers, but just guesses.

Which brings us to the fundraising birthday card Stone sent out on August 27. 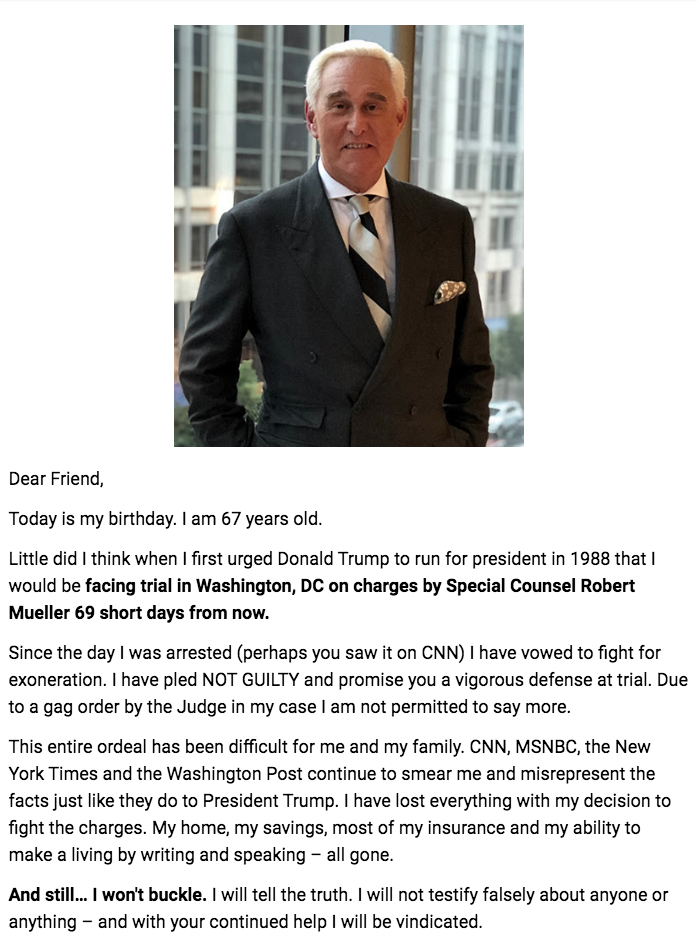 Sent by email and bitching about press coverage, especially the dig against CNN for covering his arrest live, the fundraiser risks falling afoul of ABJ’s gag again.

Nevertheless, Stone risks sanctions for violating the gag to remind his readers, one of whom — President Trump — he names twice, that his trial is quickly approaching. He reminds his readers of the cost he has already paid for not pleading guilty. He reassures his readers, including the named one, that he will not “testify falsely about anyone or anything,”

It’s unclear whether this is a demand for a pre-trial pardon (which would save Trump the embarrassment of the trial), or whether it’s an attempt to call Trump’s attention to his plight. But it’s little different from the messaging back and forth on pardons that Mueller laid out in his report.

Certainly Stone has seen something that makes him want to remind Trump of his oncoming trial.