On August 2, 2016, Donald Trump’s campaign manager took a break from his campaign work for a secret meeting with his former employee, Konstantin Kilimnik. Kilimnik first pitched the meeting on 10:51AM on July 29 after meeting in person in Moscow with Viktor Yanukovych, explaining that, “It has to do about the future of [Yanukovych’s] country, and is quite interesting.” Paul Manafort accepted the meeting that same day, saying Tuesday was the best day for it. After Kilimnik returned to Ukraine on July 31, he told Manafort he needed two hours for the meeting and would arrive at JFK at 7:30 PM on August 2 for the meeting.

At the meeting, Manafort and Kilimnik discussed three things. First, they discussed a plan to make “peace” in Ukraine by creating an autonomous region in Donbas and getting Yanukovych “elected” to head it. Manafort later told Mueller’s team that he cut the meeting short before Kilimnik asked him to get Trump to come out for the peace plan, though Mueller’s team argued and Amy Berman Jackson agreed that Manafort was lying about what happened at the meeting.

After Rick Gates showed up (he came late), Manafort laid out for Kilimnik how the campaign planned to win Michigan, Wisconsin, Pennsylvania, and Minnesota.

Finally, Kilimnik told Manafort how he could get back on the gravy train of Oleg Deripaska and the Party of Regions. Specifically, Kilimnik explained what Manafort would have to do to get Ukrainian oligarchs Rinat Akhmetov and Serhiy Lyovochkin to pay him money that Manafort claimed they owed him from past work. Eight days later, on August 10, Manafort — who was badly underwater and working for Trump for “free” — would tell his accountant to book $2.4M in income from those oligarchs, to be paid in November. 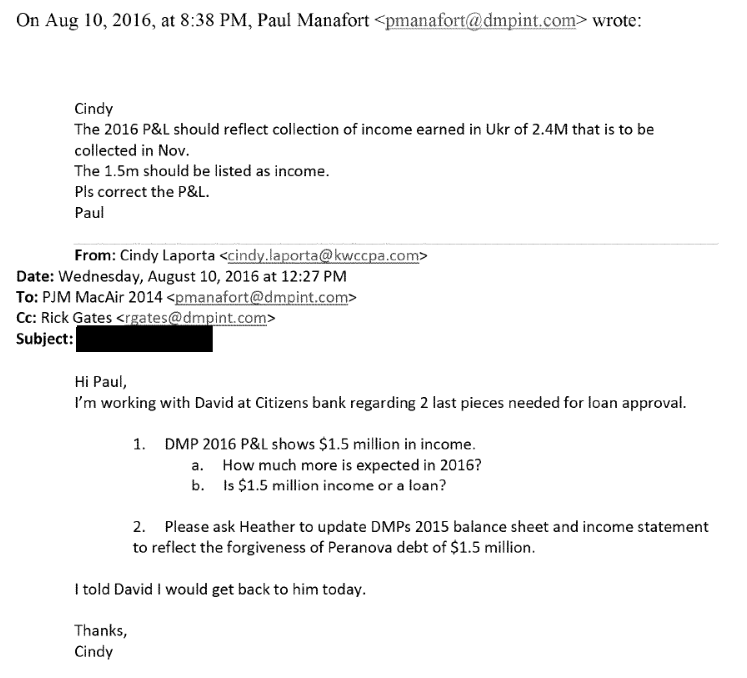 Shortly thereafter (possibly the day he returned, on January 12), Manafort reportedly told Reince Priebus to undercut claims that Trump had close ties to Russia by debunking the Steele dossier, a strategy that — because the dossier turned out to be largely shit and possible disinformation — turned out to be wildly successful. As the DOJ IG Report describes in new detail, Christopher Steele had been working for Deripaska in an effort to help the oligarch settle his score with Manafort during the period he was working on the dossier.

From that point forward, Manafort would continue to pursue a “peace” plan in Ukraine that would give Russia what it wanted up until shortly before he was jailed in June 2018.

These are the events that about which Paul Manafort lied to prevent Mueller from fully understanding. To give Manafort an incentive to lie, John Dowd started telling him he would be “taken care of” in early 2018. Then, around the time he faced jail, Trump started making those pardon offers more explicit.

On June 15, 2018, the day the judge presiding over Manafort’s D.C. case was considering whether to revoke his bail, the President said that he “felt badly” for Manafort and stated, “I think a lot of it is very unfair.” And when asked about a pardon for Manafort, the President said, “I do want to see people treated fairly. That’s what it’s all about.” Later that day, after Manafort’s bail was revoked, t.he President called it a ” tough sentence” that was “Very unfair!” Two days later, the President’s personal counsel stated that individuals involved in the Special Counsel’s investigation could receive a pardon ” if in fact the [P]resident and his advisors .. . come to the conclusion that you have been treated unfairly”-using language that paralleled how the President had already described the treatment of Manafort.

These details — about what really happened in that meeting on August 2, 2016 and what Manafort did afterwards — are some of the things that Trump successfully obstructed the Mueller investigation in an effort to cover up.

And around the time Mueller publicly announced that Manafort had breached his plea deal by lying about all these things, Rudy Giuliani launched the campaign that would ultimately lead to getting the anti-corruption Ambassador in Ukraine, Marie Yovanovitch, fired, then would subsequently lead Trump to demand (in the same call while attacking Mueller) that the newly elected anti-corruption President of Ukraine, Volodymyr Zelensky, gin up investigations into his opponents Hillary Clinton and Joe Biden. Rudy conducted that campaign, significantly, while consulting Manafort in prison, and the effort is, at least in part, an effort to give Trump an excuse to pardon Manafort so Manafort will continue to remain silent about what really happened.

The Republican Party spent the entire day yesterday claiming that Donald Trump demanded those investigations out of concern for corruption in Ukraine. The Republican Party claimed, with a straight face, that the man who obstructed an investigation into what his own campaign manager did to get the pro-corruption pro-Russian party in Ukraine to pay him $2.4 million while he worked for Trump for “free,” opposed corruption in Ukraine.

This is the story the Democrats need to lay out over the next several weeks. The Republicans don’t much care that their arguments are transparently ridiculous. They care about defending a process that, at least in part, is an effort to make sure Paul Manafort never tells the truth about what happened in 2016.