Update: Trump has indeed pardoned the Agent of Turkey along with a farmyard turkey. 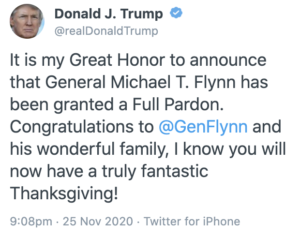 The significance of this, however, will depend on the wording of the pardon.

At least three outlets (CNN, Axios, NYT) have reported the entirely unsurprising news that Trump is considering pardoning admitted liar and undisclosed Agent of Turkey, Mike Flynn. Only the NYT provides a reasonable account of what has happened since DOJ moved to dismiss the case, and only after repeating Trump’s false claims about the investigation.

None of the outlets reviewed how complex successfully pardoning Flynn will be, without making Trump’s — or Flynn’s son’s — fate worse. That’s true because the posture of the Flynn case before Judge Emmet Sullivan is such that Sullivan has multiple possible options for holding Flynn accountable, depending on when Sullivan moves and when Trump does.

If Trump pardoned Flynn for the crimes to which Flynn pled guilty, false statements, today, a Foreign Agent of Turkey pardoned right alongside a Thanksgiving turkey — then DOJ’s motion to dismiss the prosecution for Flynn’s false statements charges would likely be mooted. But there’s still a pending motion to withdraw Flynn’s plea before Judge Sullivan, which by itself mooted DOJ’s promises not to prosecute Flynn for hiding that he was working for the government of Turkey rather than just a foreign business in a FARA filing in March 2017. Plus, when Flynn pled, it was understood that would end the investigation, but given that he reneged on his plea, there’s nothing stopping DOJ from investigating Mike Jr for his involvement with Turkey, if Flynn were pardoned.

So to get Flynn out of immediate legal jeopardy, Trump would need to pardon Flynn for crimes to which he pled guilty — the false statements to hide Trump’s involvement in “colluding” with Russian to undermine US policy — but also the crime to which Flynn didn’t plead guilty, hiding that he was an Agent of Turkey while getting classified briefings during the 2016 campaign. That’s all the more true given that DOJ’s appeal of the Bijan Kian case is still unresolved (it is scheduled for oral argument on December 11), and trying Kian along with Mike Flynn, charged as a co-conspirator, would eliminate many of the legal difficulties from the first trial.

But that’s still not adequate. Flynn made multiple materially conflicting statements before Judge Sullivan and the grand jury. When directing amicus John Gleeson on what he should consider, Sullivan asked whether he should hold Flynn in contempt. Gleeson said that, instead, he should consider those additional lies when sentencing him on the charged crimes. DOJ argued that Sullivan should, instead, refer the charges to DOJ. Even if Sullivan referred those charges today and Bill Barr declined prosecution (as DOJ made clear in hearings they would), Biden’s DOJ could reopen the case. So to get Flynn out of trouble for his efforts to blow up his own prosecution, Trump would have to pardon those crimes as well. But if Trump pardoned Flynn today, Sullivan could wait and ultimately hold Flynn in contempt; while Trump succeeded in freeing Joe Arpaio of criminal contempt with a pardon, it’s not clear whether that could work preemptively.

Assuming Trump does pardon Flynn for some or all of these crimes, it would add several overt actions to obstruction charges against himself. So unless he’s sure that Mike Pence would give him a last minute pardon (or certain that his own self-pardon would withstand legal review), then pardoning all Flynn’s crimes would pile up his own exposure.

Then, if Trump does pardon Flynn, it will surely become a matter for a hearing before one or the other of the Judiciary Committees into Trump’s abuse of the pardon power. Flynn will have no Fifth Amendment privilege and Biden’s DOJ will have the ability to enforce contempt motions from Congress. As I have noted, in the process of attempting to blow up Flynn’s prosecution, Ric Grenell and Sidney Powell and DOJ have released documents that will make it far harder for Mike Flynn to sustain his claim not to remember what Trump’s involvement in the “collusion” with Russia was. Public testimony (or even depositions run by staffers) might elicit evidence that would subject Trump himself to conspiracy charges or might result in new false statements charges.

Finally, there’s the matter of the documents that got altered as part of DOJ’s effort to blow up Flynn’s prosecution. There, Flynn is probably totally safe from legal jeopardy. But the lawyers might not be, at least at DOJ and possibly including Sidney Powell and Jenna Ellis. Importantly, at the time of that effort, there was no conceivable privilege protecting discussions between Flynn’s defense attorney and Trump’s campaign lawyer, nor between Powell and Trump. Since then, Powell’s involvement in Trump’s attempts to lie about the election have been contested (and Trump and Powell could both face consequences for their lies on that front). So Trump’s decision to pardon Flynn now after being told by Powell before September that Flynn didn’t want a pardon would raise questions about its tie to the election.

Don’t get me wrong: The pardon power is awesome, and assuming a competent lawyer like Pat Cipollone is involved in the process, Trump might manage to negotiate all these risks and successfully ensure that Flynn does no prison time for his crimes. But this is the kind of complexity that Trump will face as he tries to pay off those who protected him.

Roger Stone Takes Georgia, and the Senate, Hostage Even Bill Barr (in His Confirmation Hearing) Agreed that Trump Just Committed...