As I’ve been harping of late, Billy Barr and Jeffrey Rosen went to great lengths to protect Rudy Giuliani’s efforts to obtain and disseminate what the Intelligence Community already knew was Russian-backed disinformation laundered through Andrii Derkach. That effort included the following:

Last year, when it was disclosed that Barr had directed Brady to willingly accept this Russian disinformation, American Oversight FOIAed and then sued for the paper trail of the effort, submitted as four separate FOIAs:

Before American Oversight filed the lawsuit, the Trump Admin did two things that will have an effect on what we’re seeing. First, DOJ combined requests one and two above; as we’ll see, that had the effect of hiding that Barr didn’t put anything in writing. In addition, USAPAW told American Oversight that they were going to refer the request for such an order to Main Justice for referral.

While the lawsuit was filed under the Trump Administration, the substantive response to it started in February. The FOIA is a way to understand more about this effort — both how willing Barr’s DOJ was to put this scheme in writing, as well as the volume of paper trail that it generated.

The first status report, submitted on February 22, revealed the following based on an initial search:

The second status report, submitted on April 1, reported that of the initial search, the following was deemed potentially responsive:

Here is the USAPAW production.

The third status report, submitted on May 3, reported the following:

Here’s what has currently been provided to American Oversight (go here for live links). 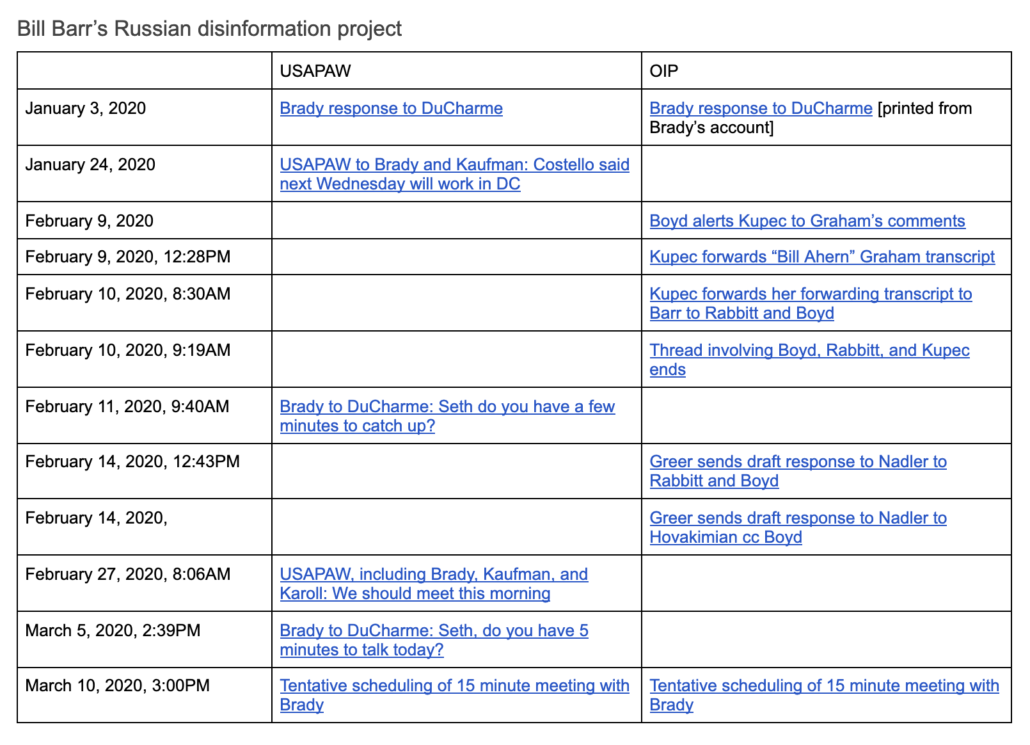 Note, this may be clarified in upcoming dumps, but for now, there appears to be something very irregular with the OIP response. At first, DOJ said there were up to 8,851 items that were responsive to American Oversight’s request. But with the next status report, DOJ said there were just 30 pages. The most recent release claimed to account for 28 of those 30 pages.

In the second joint status report, OIP stated that it had completed its search and its initial responsiveness and deduplication review of potentially responsive documents and identified approximately 30 pages of material likely responsive to Plaintiff’s request. See ECF No.7, ¶ 2. OIP further stated that it had sent these records out for consultation pursuant to the Department’s regulations, 28 C.F.R. § 16.4(d), and expected to be able to provide its first response to Plaintiff on or around April 29, 2021. Id. On April 29, 2021, OIP made its first interim response. It released 18 pages in part with portions redacted pursuant to Exemptions 5 and/or 6 and withheld four pages in full pursuant to Exemption 5. OIP is awaiting responses from other components on the remaining six pages.

4 pages withheld under b5 exemption*

6 pages referred to another component

That’s a problem because there are at least two pages of emails that were part of the USAPAW response that must have had a counterpart at DOJ, as well as one missing from both (though USAPAW has 1000 pages to release):

I assume this will become more clear with further releases (indeed, American Oversight may have the next installment already). Perhaps there’s a sound explanation. But thus far, it looks like only the Brady side of exchanges between him and DuCharme have been provided in response.

* The response letter to Jerry Nadler was two pages long, and the draft was sent twice (or there were two drafts), so those probably account for the 4 pages withheld on b5 exemptions.