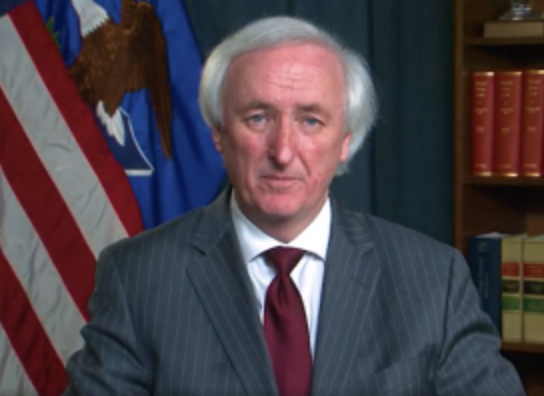 On January 22 — after Jeffrey Rosen was no longer Acting Attorney General but before Trump’s second impeachment trial — Katie Benner published a story describing Trump’s efforts to get Jeffrey Bossert Clark to undermine those at DOJ, including Rosen and Acting Deputy Attorney General Richard Donoghue, who refused to endorse Trump’s lies about the election.

As I noted the other day, that story included all the details that have been dribbling out from the House Oversight Committee in recent weeks: Trump’s efforts to get DOJ to intervene in Georgia, Rosen and Donoghue’s refusal, followed by Trump’s effort to put Clark in charge at DOJ on January 3. Benner had all that nailed in January.

The day after Benner’s January 22 story, the holdover members of the Senate Judiciary Committee sent a letter to DOJ citing the story and asking for documents behind it.

On January 22, The New York Times reported astonishing details about an alleged plot between then-President Donald Trump and then-Acting Assistant Attorney General of the Civil Division Jeffrey Bossert Clark to use the Department of Justice to further Trump’s efforts to subvert the results of the 2020 presidential election.[1]  These efforts culminated on January 6, when Trump incited a violent mob that attacked Congress as it counted the electoral votes and prepared to affirm President Biden’s victory.  The information revealed by this story raises deeply troubling questions regarding the Justice Department’s role in Trump’s scheme to overturn the election.

The Senate Judiciary Committee will conduct vigorous oversight of these matters.  As a first step, we seek your immediate assurance that the Department will preserve all relevant materials in its possession, custody, or control.  Please also produce the following materials as soon as possible, but no later than February 8, 2021:

That letter set a deadline of February 8, over a month before Merrick Garland was confirmed and over 70 days before Lisa Monaco was confirmed.

In May, House Oversight Chair Carolyn Maloney sent Rosen a request (which hasn’t been made public) for a transcribed interview.

Seemingly in response to that — though the letter cites both the January request and the May one — DOJ (in the guise of Bradley Weinsheimer, who was elevated from NSD to DOJ’s institutional accountability role at Associate Deputy Attorney General by Jeff Sessions, and so was a colleague of those DOJ officials), wrote Rosen and five other former top DOJ officials permitting them to testify about a carefully defined set of events. The testimony is basically limited to, “any efforts by President Trump or any DOJ officials to advance unsubstantiated allegations of voter fraud, challenge the 2020 election results, stop Congress’s count of the Electoral College vote, or overturn President Biden’s certified victory.” It is limited to events that happened after Attorney General Barr resigned on December 14. The letter specifically prohibits discussing any prosecutorial decisions the men made, or discussing investigations that were ongoing when they left.

But within that scope, the letter permits these former DOJ officials to answer questions that would otherwise be covered by executive privilege.

[T]he Department authorizes you to provide unrestricted testimony to the Committees, irrespective of potential privilege, so long as the testimony is confined to the scope of the interviews as set forth by the Committees and as limited in the penultimate paragraph below.

Of particular note, DOJ asked President Biden — via the White House Counsel — whether he wanted to invoke privilege; he chose not to.

Because of the nature of the privilege, the Department has consulted with the White House Counsel’s Office in considering whether to authorize you to provide information that may implicate the presidential communications privilege. The Counsel’s Office conveyed to the Department that President Biden has decided that it would not be appropriate to assert executive privilege with respect to communications with former President Trump and his advisors and staff on matters related to the scope of the Committees’ proposed interviews, notwithstanding the view of former President Trump’s counsel that executive privilege should be asserted to prevent testimony regarding these communications. See Nixon v. Administrator of General Servs., 433 U.S. 425, 449 (1977) (“[I]t must be presumed that the incumbent President is vitally concerned with and in the best position to assess the present and future needs of the Executive Branch, and to support invocation of the privilege accordingly.” see also id. (explaining that the presidential communications privilege “is not for the benefit of the President as an individual, but for the benefit of the Republic”) (internal citation omitted).

As Benner wrote in a story offering details of Jeffrey Rosen’s testimony, Rosen has been trying to get permission to testify for “much of the year.” As soon as DOJ gave it, he rushed to testify before Trump could intervene.

Mr. Rosen has spent much of the year in discussions with the Justice Department over what information he could provide to investigators, given that decision-making conversations between administration officials are usually kept confidential.

Douglas A. Collins, a lawyer for Mr. Trump, said last week that the former president would not seek to bar former Justice Department officials from speaking with investigators. But Mr. Collins said he might take some undisclosed legal action if congressional investigators sought “privileged information.”

Mr. Rosen quickly scheduled interviews with congressional investigators to get as much of his version of events on the record before any players could ask the courts to block the proceedings, according to two people familiar with those discussions who are not authorized to speak about continuing investigations.

He also reached out directly to Michael E. Horowitz, the Justice Department’s inspector general, and pledged to cooperate with his investigation, according to a person briefed on those talks.

The question is why. After all, these events were knowable to DOJ since they happened, and for the entirety of that time, DOJ has been conducting an investigation into efforts to obstruct the vote count. For some of that period, in fact, Rosen himself was in ultimate charge of the investigation, and he could have ordered or authorized himself to testify.

Benner didn’t specify whether Rosen might have been interviewed by the FBI, though the implication is he has not been asked.

Similarly, DOJ IG has been investigating related issues since then as part of a specific investigation into the BJ Pak firing and a general investigation into January 6. While Michael Horowitz could not subpoena Rosen, he could simply have asked Rosen to provide testimony. But Benner is quite clear that Rosen has not yet testified even to Horowitz.

During that period, too, there was an instance where DOJ IG asked someone for an interview, but the person quit to avoid the testimony.

The OIG concluded that the senior DOJ official violated both federal regulations and DOJ policy by failing to appear for a compelled OIG interview while still a DOJ employee. The OIG offered the senior DOJ official the opportunity to cure that violation by participating in a voluntary interview after leaving the Department, but the senior DOJ official, through counsel, declined to do so. The OIG has the authority to compel testimony from current Department employees upon informing them that their statements will not be used to incriminate them in a criminal proceeding. The OIG does not have the authority to compel or subpoena testimony from former Department employees, including those who retire or resign during the course of an OIG investigation.

Those events were reported on April 19.

At least as interesting, however, is that DOJ sent the letter just one day before DOJ submitted a court filing in the Eric Swalwell lawsuit — speaking of members of Congress but using more generalized language — arguing that no federal officials can campaign in their official capacity and further noting that attacking one’s employer is not within the scope of someone’s job description.

The record indicates that the January 6 rally was an electioneering or campaign activity that Brooks would ordinarily be presumed to have undertaken in an unofficial capacity. Activities specifically directed toward the success of a candidate for a partisan political office in a campaign context—electioneering or campaign activities—are not within the scope of the office or employment of a Member of the House of Representatives. Like other elected officials, Members run for reelection themselves and routinely campaign for other political candidates. But they do so in their private, rather than official, capacities.

This understanding that the scope of federal office excludes campaign activity is broadly reflected in numerous authorities. This Court, for example, emphasized “the basic principle that government funds should not be spent to help incumbents gain reelection” in holding that House or Senate mailings aimed at that purpose are “unofficial communication[s].” Common Cause v. Bolger, 574 F. Supp. 672, 683 (D.D.C. 1982) (upholding statute that provided franking privileges for official communications but not unofficial communications).

Second, the Complaint alleges that Brooks engaged in a conspiracy and incited the attack on the Capitol on January 6. That alleged conduct plainly would not qualify as within the scope of employment for an officer or employee of the United States, because attacking one’s employer is different in kind from any authorized conduct and not “actuated . . . by a purpose to serve” the employer. Id. § 228(1)(c). Brooks does not argue otherwise. Instead, he denies the Complaint’s allegations of conspiracy and incitement. The Department does not address that issue here because the campaign-related nature of the rally independently warrants denial of certification, and because the Department is engaged in ongoing investigations into the events of January 6 more generally. But if the Court were to reject our argument that the campaign nature of the January 6 rally resolves the certification question, the Court should not certify that Brooks was acting within the scope of his office or employment unless it concludes that Brooks did not engage in the sort of conduct alleged in the Complaint. [my emphasis]

It’s possible that this seven month delay is inexcusable.

It’s also possible that it reflects the time DOJ took to come to other determinations about whether privileged information could be used to investigate a former President and if so how to obtain it.

The Attorney General and Deputy Attorney General encouraged the team to continue to follow the facts in this case and charge what the evidence supports to hold all January 6th perpetrators accountable.

Garland made statements reiterating his commitment to charge all perpetrators against whom the evidence supported charges.

19 Minutes: The Tuberville Call and DOJ’s Use of Obstruction in January... Did Paul Gosar Take Actions on Behalf of Donald Trump that Contributed to Ashli...