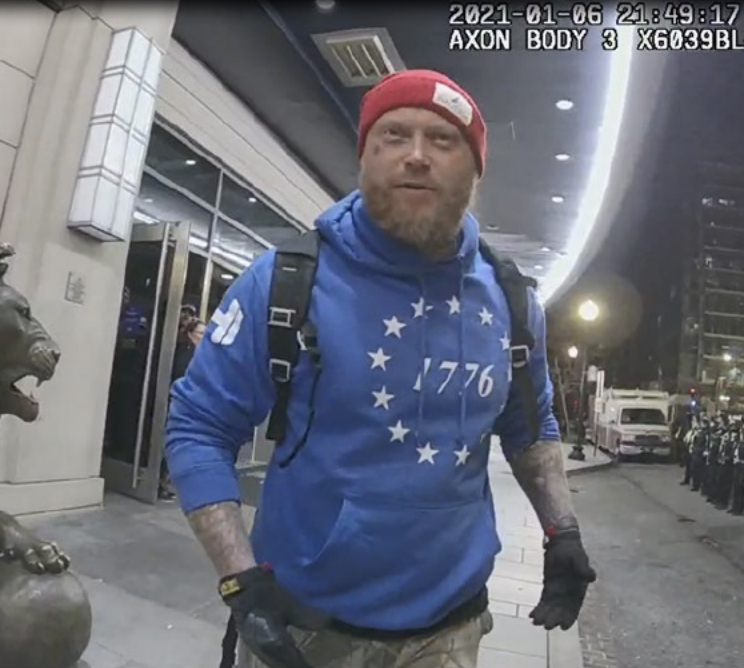 I’ve written about John Pierce’s efforts to collect a cast of January 6 defendants to represent — many, those who could incriminate Joe Biggs, especially Proud Boys. That means he represents a ton of Floridians, though he lives in California. As of this morning, he represented 17 defendants (after having been fired by two other key January 6 participants, Ryan Samsel and Alan Hostetter, already).

Christopher Worrell: Christopher Worrell is a Proud Boy from Florida arrested on March 12. Worrell traveled to DC for the December MAGA protest, where he engaged in confrontational behavior targeting a journalist. He and his girlfriend traveled to DC for January 6 in vans full of Proud Boys paid for by someone else. He was filmed spraying pepper spray at cops during a key confrontation before the police line broke down and the initial assault surged past. Worrell was originally charged for obstruction and trespassing, but later indicted for assault and civil disorder and trespassing (dropping the obstruction charge). He was deemed a danger, in part, because of a 2009 arrest for impersonating a cop involving “intimidating conduct towards a total stranger in service of taking the law into his own hands.” Pierce first attempted to file a notice of appearance on March 18. Robert Jenkins (along with John Kelly, from Pierce’s firm) is co-counsel on the case. Since Pierce joined the team, he has indulged Worrell’s claims that he should not be punished for assaulting a cop, but neither that indulgence nor a focus on Worrell’s non-Hodgkins lymphoma nor an appeal succeeded at winning his client release from pre-trial detention. On September 24, Alex Stavrou replaced Pierce as Worrell’s attorney.

1. William Pepe: William Pepe is a Proud Boy charged in a conspiracy with Dominic Pezzola and Matthew Greene for breaching the initial lines of defense and, ultimately, the first broken window of the Capitol. Pepe was originally arrested on January 11, though is out on bail. Pierce joined Robert Jenkins on William Pepe’s defense team on March 25. By April, Pierce was planning on filing some non-frivolous motions (to sever his case from Pezzola, to move it out of DC, and to dismiss the obstruction count).

2. Paul Rae: Rae is another of Pierce’s Proud Boy defendants and his initial complaint suggested Rae could have been (and could still be) added to the conspiracy indictments against the Proud Boys already charged. He was indicted along with Arthur Jackman for obstruction and trespassing; both tailed Joe Biggs on January 6, entering the building from the East side after the initial breach. Pierce filed to join Robert Jenkins in defending Rae on March 30.

3. Stephanie Baez: On June 9, Pierce filed his appearance for Stephanie Baez. Pierce’s interest in Baez’ case makes a lot of sense. Baez, who was arrested on trespassing charges on June 4, seems to have treated the January 6 insurrection as an opportunity to shop for her own Proud Boy boyfriend. Plus, she’s attractive, unrepentant, and willing to claim there was no violence on January 6. Baez has not yet been formally charged (though that should happen any day).

Victoria White: If I were prosecutors, I’d be taking a closer look at White to try to figure out why John Pierce decided to represent her (if it’s not already clear to them; given the timing, it may simply be because he believed he needed a few women defendants to tell the story he wants to tell). White was detained briefly on January 6 then released, and then arrested on April 8 on civil disorder and trespassing charges. At one point on January 6, she was filmed trying to dissuade other rioters from breaking windows, but then she was filmed close to and then in the Tunnel cheering on some of the worst assault. Pierce filed his notice of appearance in White’s case on June 10. On September 7, White got a PD to temporarily replace Pierce until she found someone else she liked.

4. James McGrew: McGrew was arrested on May 28 for assault, civil disorder, obstruction, and trespassing, largely for some fighting with cops inside the Rotunda. His arrest documents show no ties to militias, though his arrest affidavit did reference a 2012 booking photo. Pierce filed his appearance to represent McGrew on June 16.

5, 6, 7. On June 30, Pierce filed to represent David Lesperance, and James and Casey Cusick. As I laid out here, the FBI arrested the Cusicks, a father and son that run a church, largely via information obtained from Lesperance, their parishioner. They are separately charged (Lesperance, James Cusick, Casey Cusick), all with just trespassing. The night before the riot, father and son posed in front of the Trump Hotel with a fourth person besides Lesperance (though Lesperance likely took the photo).

8. Kenneth Harrelson: On July 1, Pierce filed a notice of appearance for Harrelson, who was first arrested on March 10. Leading up to January 6, Harrelson played a key role in Oath Keepers’ organizing in Florida, particularly meetings organized on GoToMeeting. On the day of the riot, Kelly Meggs had put him in charge of coordinating with state teams. Harrelson was on the East steps of the Capitol with Jason Dolan during the riot, as if waiting for the door to open and The Stack to arrive; with whom he entered the Capitol. With Meggs, Harrelson moved first towards the Senate, then towards Nancy Pelosi’s office. When the FBI searched his house upon his arrest, they found an AR-15 and a handgun, as well as a go-bag with a semi-automatic handgun and survivalist books, including Ted Kaczynski’s writings. Harrelson attempted to delete a slew of his Signal texts, including a video he sent Meggs showing the breach of the East door. Harrelson had previously been represented by Nina Ginsberg and Jeffrey Zimmerman, who are making quite sure to get removed from Harrelson’s team before Pierce gets too involved. On September 7, Brad Geyer replaced Pierce.

9. Leo Brent Bozell IV: It was, perhaps, predictable that Pierce would add Bozell to his stable of defendants. “Zeeker” Bozell is the scion of a right wing movement family including his father who has made a killing by attacking the so-called liberal media, and his grandfather, who was a speech writer for Joseph McCarthy. Because Bozell was released on personal recognizance there are details of his actions on January 6 that remain unexplained. But he made it to the Senate chamber, and while there, made efforts to prevent CSPAN cameras from continuing to record the proceedings. He was originally arrested on obstruction and trespassing charges on February 12; his indictment added an abetting the destruction of government property charge, the likes of which have been used to threaten a terrorism enhancement against militia members. Pierce joined Bozell’s defense team (thus far it seems David B. Deitch will remain on the team) on July 6.

12. Kevin Tuck: On July 20, Pierce filed a notice of appearance for Kevin Tuck, Nathaniel’s father and still an active duty cop when he was charged.

13. Peter Schwartz: On July 26, Pierce filed a notice of appearance for Peter Schwartz, the felon out on COVID-release who maced some cops.

15. Deborah Lee: On August 23, Pierce filed a notice of appearance for Deborah Lee, who was arrested on trespass charges months after her friend Michael Rusyn.

16. Anthony Sargent: On September 24 (the same day he swapped off of Christopher Worrell’s case), Pierce showed up at the initial appearance for Anthony Saregent, another Florida Proud Boy.

Representing this many defendants would be an impossible feat, even for the most experienced defense attorney, and harder still for a civil attorney like Pierce. Plus, some of these representations would seem to pose serious conflicts.

At a status hearing for Shane Jenkins, a January 6 defendant accused of assault, this morning, his currently retained attorney, Public Defender Maria Jacob, started by saying that she believes that she’s being replaced. John Pierce’s colleague, Ryan Marshall (who is not barred in DC but nevertheless handled Pierce’s appearance in Nate DeGrave’s case yesterday), piped up to say, yes, that was happening but unfortunately the notice of appearance he thought had been filed last night had not appeared on the docket yet. When Judge Amit Mehta asked where Pierce was, Marshall said, “Mr. Pierce is in the hospital, we believe, with COVID-19, on a ventilator, non-responsive.”

Judge Mehta wished the Pierce family well and scheduled a hearing next Thursday rather than accepting the appearance of a lawyer on a ventilator to represent his 18th client in this matter.

Update: A week ago, Pierce said he would never get vaccinated.