Andrew McCabe Got His Pension and His Cufflinks — But Is that Adequate Recourse for the Country?

As part of a settlement DOJ entered into yesterday to avoid giving Andrew McCabe discovery on the full extent of the politicized campaign against him, DOJ agreed to give him his retirement — and the cufflinks he would normally have gotten upon retiring from Senior Executive Service. 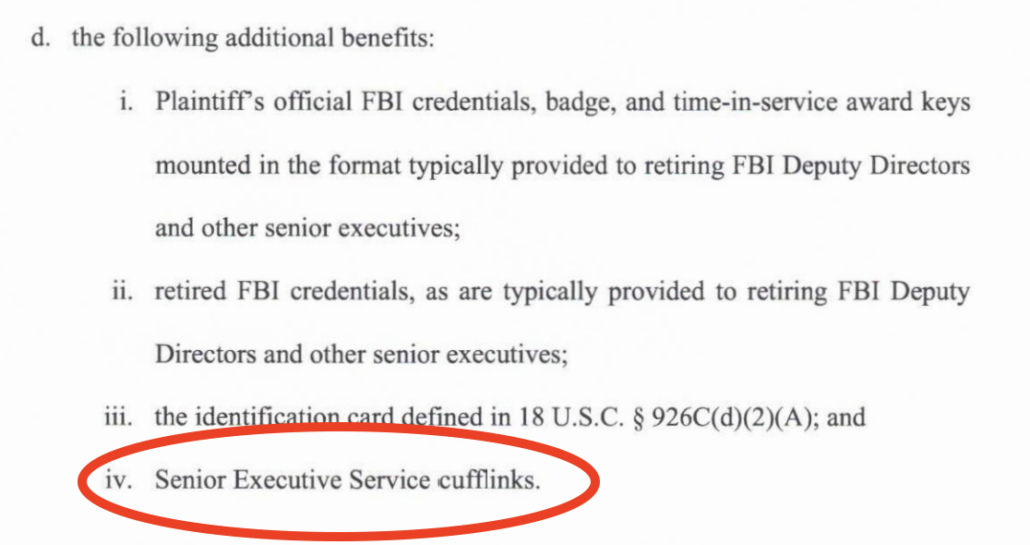 The more substantive parts of the agreement reflect a total capitulation by DOJ: restoration of McCabe’s pension backdated to the time he was fired and partial award of his legal fees for representation from Arnold & Porter.

a. a payment of a lump sum representing all retirement annuity payments, including annuity supplement payments, that he would otherwise have received from the April 1, 2018 annuity commencement date until the day before he is paid his first regular monthly payment, which will be computed in accordance with all relevant statutory and regulatory provisions, and which will not deduct or withhold any amounts for benefits not received or for taxes not owed during the time period specified above, unless such deductions and/or withholdings are required by relevant statutory or regulatory provisions;

b. prospectively from the date of his first regular monthly payment, through the federal retirement system, all periodic annuity payments, including annuity supplement payments, consistent with his March 19, 2018 retirement date;

Defendants agree to pay $539,348.15 to Plaintiff, pursuant to the Equal Access to Justice Act, and in full settlement and satisfaction of all attorney’s fees, costs, and expenses. Payment shall be made to Plaintiff via electronic funds transfer to Arnold & Porter Kaye Scholer LLP, as promptly as practicable, consistent with the normal processing procedures followed by the Department of Justice and the Department of the Treasury, following the dismissal of the above-captioned civil action. This provision does not constitute an admission that Defendants’ position was not substantially justified under 28 U.S.C. § 2412(d)(1)(A).

McCabe will get also an admission that “Executive Branch officials outside the Department” — otherwise known as The President —  “should not comment publicly on ongoing career civil service employee disciplinary matters.” [my emphasis]

WHEREAS, the Parties agree that Executive Branch officials outside the Department of Justice and its components should not comment publicly on ongoing career civil service employee disciplinary matters, except as provided by statute or regulation, so as not to create any appearance of improper political influence;

But McCabe won’t get a concession that numerous people within the chain of command at DOJ and FBI, including prosecutors who pursued a false statements charge against McCabe, bowed to that improper political influence. Nor, as noted, will McCabe get discovery to learn what documents — besides proof that Bill Barr’s DOJ altered McCabe’s notes in an effort to undermine the Mike Flynn prosecution —  DOJ was so determined to avoid disclosing that they settled this case.

All this is being accomplished, legally, by a kind of reset. McCabe’s personnel records will be altered such that there’s no record of his firing.

1. Within 30 days of the execution of this Settlement Agreement, Defendants will rescind their removal of Plaintiff from the FBI and the civil service, and will rescind and vacate former Attorney General Jefferson B. Sessions’s March 16, 2018 removal decision (“DOJ Removal Decision”), and the March 16, 2018 removal recommendation that was submitted to Attorney General Sessions (“DOJ Removal Recommendation”).

2. The Parties agree that Plaintiff’s electronic Official Personnel Folder will reflect that he was employed continuously by the FBI from July 1996 until his retirement on March 19, 2018, as the FBI Deputy Director and a member of the Senior Executive Service (“SES”), after becoming 50 years of age and completing over 20 years of service.

3. Within 30 days of the execution of this Settlement Agreement, the government will remove from Plaintiff’s electronic Official Personnel Folder all documents that reflect or reference his removal, and replace them with documents reflecting that Plaintiff was continuously employed by the FBI until his retirement on March 19, 2018. Defendants will then provide to Plaintiff a copy of his revised electronic Official Personnel Folder.

By my reading, this doesn’t force DOJ Inspector General to revise its report on McCabe to incorporate Michael Kortan’s testimony, one of the problems in the report identified in McCabe’s suit. It doesn’t negate the conflicting Office of Professional Responsibility review results. But it does legally remove the final effect of over a year of retaliation and public badgering by the President, eliminating all trace of Sessions’ last minute firing of McCabe.

I have no doubt this settlement makes a lot of sense for McCabe. He gets the money he earned over two decades of chasing terrorists, spies, and organized crime and the ability to be treated with the respect a former Deputy Director is normally accorded.

But this country is still fighting the aftereffects of a coup attempt that almost succeeded, in part, because the FBI backed off investigating those close to the President, including Proud Boys who played a key leadership role in the attack. We never got fully visibility into the President’s relationship with Russia because Trump throttled that investigation with firings and pardons. And an unrelenting flood of disinformation masks both of these facts.

We know, from the fact that DOJ entered into this settlement (among other things), that Trump badly politicized DOJ. But this settlement allows DOJ to avoid coming clean about all that happened.