The March 6, 2017 Notes: Proof about Materiality 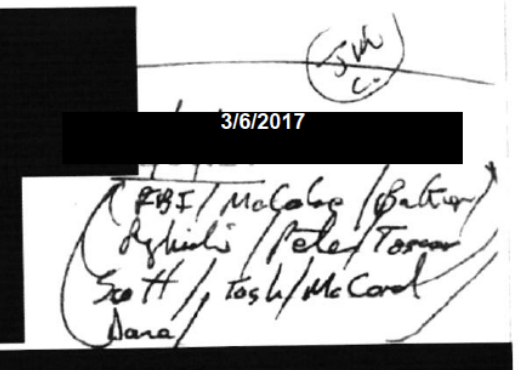 I want to return to John Durham’s objection to Michael Sussmann’s plan to offer notes from an FBI Agent and notes from a March 6, 2017 meeting as evidence.

The defense also may seek to offer (i) multiple pages of handwritten notes taken by an FBI Headquarters Special Agent concerning his work on the investigation of the Russian Bank-1 allegations, (including notes reflecting information he received from the FBI Chicago case team), and (ii) notes taken by multiple DOJ personnel at a March 6, 2017 briefing by the FBI for the then-Acting Attorney General on various Trump-related investigations, including the Russian Bank-1 allegations. See, e.g., Defense Ex. 353, 370, 410. The notes of two DOJ participants at the March 6, 2017 meeting reflect the use of the word “client” in connection with the Russian Bank-1 allegations.1 The defendant did not include reference to any of these notes – which were taken nearly six months after the defendant’s alleged false statement – in its motions in limine. Moreover, the DOJ personnel who took the notes that the defendant may seek to offer were not present for the defendant’s 2016 meeting with the FBI General Counsel. And while the FBI General Counsel was present for the March 6, 2017 meeting, the Government has not located any notes that he took there.

The Government respectfully submits that the Court should require the defense to proffer a non-hearsay basis for each portion of the aforementioned notes that they intend to offer at trial. The defendant has objected to the Government’s admission of certain notes taken by FBI officials following the defendant’s September 19, 2016 meeting with the FBI General Counsel, and the Government has explained in detail its bases for admitting such notes. Accordingly, the defendant should similarly proffer a legal basis to admit the notes he seeks to offer at trial. Fed. R. Evid. 801(c).

1. The notes of the March 6, 2017 briefing do not appear on the defendant’s Exhibit List, but the Government understands from its recent communications with counsel that they may intend to offer the notes at trial.

As I noted here, attempting to introduce the notes achieves some tactical purpose for Sussmann: presumably, the rules Judge Christopher Cooper adopted in his motions in limine order will apply to these two potential exhibits. So putting these exhibits out there provide a way to hem Durham in on that front.

But they may be more central to Sussmann’s defense. Sussmann may be preparing these exhibits (and one or more witnesses to introduce them) to prove that his alleged lie was not material.

We know a bit about the meeting in question and the potential note-takers.

The DOJ IG Report on Carter Page explains that, after Dana Boente became acting Attorney General after Sally Yates’ firing, he asked for regular briefings because he believed that, “the investigation had not been moving with a sense of urgency,” and that, “it was extraordinarily important to the Department and its reputation that the allegations of Russian interference in the 2016 U.S. elections were investigated.” DOJ IG may have muddled the scope of these meetings (as they did the scope of Bruce Ohr’s actions), because Boente was obviously talking about all the Russian interference allegations, and Alfa Bank was, as far as we know, always separate from Crossfire Hurricane (and in any case never became part of the Mueller investigation).

On January 30, 2017, Boente became the Acting Attorney General after Yates was removed, and ten days later became the Acting DAG after Jefferson Sessions was confirmed and sworn in as Attorney General. Boente simultaneously served as the Acting Attorney General on the FBI’s Russia related investigations after Sessions recused himself from overseeing matters “arising from the campaigns for President of the United States.” Boente told the OIG that after reading the January 2017 Intelligence Community Assessment (ICA) report on Russia’s election influence efforts (described in Chapter Six), he requested a briefing on Crossfire Hurricane. That briefing took place on February 16, and Boente said that he sought regular briefings on the case thereafter because he believed that it was extraordinarily important to the Department and its reputation that the allegations of Russian interference in the 2016 U.S. elections were investigated. Boente told us that he also was concerned that the investigation lacked cohesion because the individual Crossfire Hurricane cases had been assigned to multiple field offices. In addition, he said that he had the impression that the investigation had not been moving with a sense of urgency-an impression that was based, at least in part, on “not a lot” of criminal legal process being used. To gain more visibility into Crossfire Hurricane, improve coordination, and speed up the investigation, Boente directed ODAG staff to attend weekly or bi-weekly meetings with NSD for Crossfire Hurricane case updates.

Boente’s calendar entries and handwritten notes reflect multiple briefings in March and April 2017. Boente’s handwritten notes of the March meetings reflect that he was briefed on the predication for opening Crossfire Hurricane, the four individual cases, and the status of certain aspects of the Flynn case. [my emphasis]

As noted, these meetings focused on ways to “reenergize” the Russian investigations, including the one into Paul Manafort’s corruption.

Additionally, notes from an FBI briefing for Boente on March 6, 2017, indicate that someone in the meeting stated that Ohr and Swartz had a “discussion of kleptocracy + Russian org. crime” in relation to the Manafort criminal case in an effort to “re-energize [the] CRM case.”

And we know who attended the March 6 meeting, because Jeffrey Jensen released highly redacted notes — with a date added — as part of his effort to blow up the Mike Flynn case.

Jim C[rowell, who took the notes]

For the benefit of the frothers who are sure David Laufman was part of this: sorry, he was not.

Laufman did not attend the meetings in January, February, and March 2017 that were attended by Boente, McCord, and other senior Department officials.

The IG Report describes that in addition to Crowell, Boente, Tashina Gauhar, and Scott Schools took notes of these meetings. We also know Strzok was an assiduous note taker, so it’s likely he took notes as well. People like Crowell (who is now a Superior Court judge) or Boente would make powerful witnesses at trial.

And according to Durham’s objection, among the as many as five sets of notes from this meeting that James Baker attended, two say that the word “client” came up in conjunction with the Alfa Bank allegations.

Durham seems to suspect this is an attempt to bolster possible Baker testimony that, after the initial meeting between him and Sussmann, he came to know Sussmann had a client (which would be proof that Sussmann wasn’t hiding that). He did, and within days! That’s one important part of the communications during which Baker got Sussmann and Rodney Joffe’s help to kill the NYT story: as part of that exchange, he learned that Sussmann had to consult with someone before sharing which news outlet was about to publish the Alfa Bank story. For that purpose, according to the common sense rules just adopted by Cooper, one or some of the ten people at the meeting would need to remember Baker referring to a “client,” and one of the two people who noted that in real time has to remember doing so.

But there’s likely another reason Sussmann would want to introduce this information.

Not only did a contemporaneous record reflect that everyone involved learned if they did not already know that there was a client involved in this Alfa Bank allegation, but by then everyone involved also knew that Glenn Simpson worked first for a GOP and then a Democratic client.

Finally, handwritten notes and other documentation reflect that in February and March 2017 it was broadly known among FBI officials working on and supervising the investigation, and shared with senior NSD and ODAG officials, that Simpson (who hired Steele) was himself hired first by a candidate during the Republican primaries and then later by someone related to the Democratic Party.

The things that, Durham insists, would have led the FBI to shy away from this investigation were known by the time of this meeting.

And, I suspect, that’s why Sussmann wants to introduce the FBI Agent’s notes (and yes, it is possible they are Strzok’s). Because the actions taken in the wake of this meeting provide a way of assessing what the FBI would have done — and did do — after such time as they undeniably knew that Sussmann had a client.

Boente wanted more action taken. Ultimately, whatever action was taken led shortly thereafter to the closure of the investigation.

But Durham’s entire prosecution depends on proving that the FBI would have acted differently if they knew Sussmann had a client. So it is perfectly reasonable for Sussmann to introduce evidence about what the FBI said and did after such time as they provably did know that.

Judge Cooper Rules for Durham on Key Issues, But Rules against His Conspiracy... A ‘Dicks Out’: On the Reported U.S. Intelligence Assist to Ukra...