The Intercept has an article that has gotten surprisingly little attention, particularly given the reports that Mike Flynn is prepping to flip on Trump and that the House Intelligence Committee will have Erik Prince testify in its investigation.

It reveals that the previously unknown identity of a Russian that Erik Prince met in the Seychelles in January is the CEO of the Russian Direct Investment Fund.

The identity of the Russian individual was not disclosed, but on January 11, a Turkish-owned Bombardier Global 5000 charter plane flew Kirill Dmitriev, CEO of the Russian Direct Investment Fund, to the Seychelles, flight records obtained by The Intercept show. Dmitriev’s plane was an unscheduled charter flight and flew to the island with two other Russian individuals, both women. The RDIF is a $10 billion sovereign wealth fund created by the Russian government in 2011.

Although Prince repeatedly stated he couldn’t remember the Russian’s name — “We didn’t exchange cards” — a spokesperson for Frontier Services Group confirmed to The Intercept in September that Prince “crossed paths” with Dmitriev in the Seychelles.

The article goes on to note that the RDIF separated from its parent company Vnesheconombank in 2016 to evade sanctions.

While it is legal to do business with RDIF in certain circumstances, there are several nuanced restrictions that if ignored or overlooked can easily lead to a violation. The resulting uncertainty has created opportunities for companies and individuals to find loopholes to bypass sanctions.

Analysts say RDIF attempted to do this in 2016 when the fund distanced itself from its parent company, the Russian bank Vnesheconombank, or VEB, which is also subject to U.S. sanctions. Legislation signed by Putin in June 2016 enabled RDIF to transfer its management company, known as the RDIF Management Company LLC, to the Russian Federal Agency for State Property Management.

Sadly, the Intercept article doesn’t lay out the timeline this creates:

Later December: At the behest of Kislyak, Kushner meets with Vnesheconombank’s Sergey Gorkov 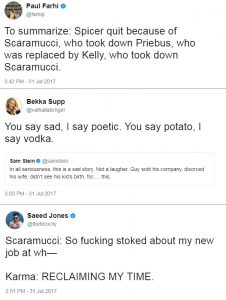 I resent all to hell that we are forking over a metric crap ton of tax dollars every weekend for his Golden Golf Hackness to hang out at one of his courses. This weekend, though, I’d make an exception — and of course, he drags his feet getting out of town, making trouble on the way.

You’ve no doubt heard that White House chief of staff Reince Priebus resigned or quit, depending on which source you read and when. Scuttlebutt says Trump was pissed that Priebus didn’t push back at Scaramucci after the profanity-laced interview with Ryan Lizza. Other scuttlebutt says Scaramucci is actually Jared and Ivanka’s minion; he’s so vulgar and cold he fits in anywhere in Team Trump. So bloody hard to keep the players straight; where’s self-sucking Bannon in all this?

Anyhow, apparently His Imminently Golf Hackness tweeted his pink slip from the door of Air Force One.

And Priebusly-of-West-Wing was left on the tarmac without a ride.

Jesus Christ, how mother freaking cold and rude, the only guy who really kept Trump looking like a legitimate member of the GOP, tossed like an empty KFC bag.

Priebus, who is rumored to be the only staffer who didn’t sign one of Team Trump’s non-disclosure agreements, hasn’t figured out he doesn’t have to suck up any longer.

I hate that these sloppy mean girls occupying the White House make me feel sorry for that schmuck Priebus.

Kelly has peeved off some senators; I supposed taking on role of chief fly swatter will be nothing in comparison to his failure to disclose his relationship to military contractors.

Rumor: Kelly is being moved to CoS to make way for Sessions as DHS director, which in turn leaves the AG’s position open for a new nominee willing to fire Mueller.

Latest buzz is that McCain’s vote YES on the Motion to Proceed earlier in week set up the actual failure of H.R. 1628 Health Care Freedom Act vote last night.

The analysis was posted at Reddit, of all places.

… The thing is, the Senate can only consider one budget reconciliation bill per topic per year. Of course, if the bill dies in committee and never comes to an official vote, it doesn’t count- which is why they’ve been able to keep hammering away at the issue.

This bill, though, was allowed to come to the Senate floor, because the Republicans thought they’d secured the votes. Collins, Murkowski and the Democrats would vote no, everyone else would vote yes, and Pence would break the tie. And then McCain completely fucked them. And it was almost certainly a calculated move; he voted to allow the bill to come to the floor. Had McCain allowed it to die in committee, McConnell could have come back with yet another repeal bill; but he let it come to a vote, and now they can’t consider another budget reconciliation bill for the rest of the fiscal year. The Senate needs 60 votes to pass any kind of healthcare reform now. …

Did John McCain plan to screw Trumpcare by himself, or was this staged to save the Senate GOP caucus face as I speculated earlier today?

If he had help staging this, who else was in on it? “Yertle” McConnell, who is acting pouty and butt-hurt? If McConnell was in on it, then he deserved a nomination for an acting award.

And was this a final Fuck You to Heel-Spurs-in-Chief, who disrespected McCain’s service and time as a POW?

I can’t help it; I hope it was payback. And I hope this buys more time to build real fixes for ACA until a Democratic majority can take back Congress.

UPDATE — 12:11 P.M. EDT —
Yep, too good to be true. @Celeste_P says nope. Maverick wasn’t super-maverick after all. It was fun to imagine while the illusion lasted.

It’s the weekend, finally. Hope somebody is lost longer than usual in the rough. Open bar, open thread. Behave and drive safely.

I still don’t have enough caffeine in my system and it’s nearly noon here. An entire pot of java may do the trick. As I rouse and read the hot takes after the failure of H.R. 1628 last night, a few thoughts stick with me.

All the think pieces — most written by white men lauding John McCain’s maverick move by departing from the party line — are evidence ‘the show’ worked.
McCain called it that when asked before the vote last night which way he was going. “Watch the show,” he said.

Meanwhile, the two women senators who have been firm all along they couldn’t vote for a bill causing damage to their constituents receive far fewer plaudits from the same mostly-white-male pundit class. Murkowski had been threatened by the Interior Secretary at Trump’s request. I haven’t heard for certain, but I’ll bet Collins received threats as well, probably from Trump-supporting constituents.

McCain won’t get those kinds of threats. He made his point last night about the power he wields within GOP Senate caucus as the final A/B switch on legislation. But the GOP Senate already knew this.

What McCain did was give the GOP a face-saving way to vote for a piece of shit they didn’t want to pass, without the repercussions Collins and Murkowski (and at varying times, Heller and Capito) have faced for rejecting a POS bill.

This is why they waited until the last goddamned minute to draft a meager eight-pages, slapping in some egregious stuff to ensure Collins and Murkowski couldn’t vote, adding the 20% annual premium increase as a coup de grace.

Because McCain would do the maverick kabuki for them, slap on his mask and robes, make big gestures and kill the bill for them.

And it worked not only because all the white male pundit class got suckered by their usual privileged blindness, but the white male Tweeter-in-Chief bought it, hook, line, sinker. He blamed all the Democrats and three GOP senators. All the other senators are off the hook.

Bonus: McCain’s legacy is salvaged with the patriarchal punditry.

Scaramucci is nothing more than a highly-animated automaton on a stage; nothing he says is real. Why? Because the real communications are being run out of house by Steve Bannon, and likely in violation of federal law.

Don’t believe me about Scaramucci’s role? Take a look at your news feed and point to any announcement about his firing or resignation. You know damned well had a communications director acted like he has under any other previous administration he’d have been walked out the White House’s fence.

p.s. Some say Scaramucci’s lowering discourse. Come the fuck on. He talks the way all of Wall Street’s white males do. The misogynist crack about Sarah Huckabee Sanders’ appearance? Par for the course.

Recommended lunch hour read for you: a book review by Andrew Bacevich in London Review of Books on The General v. the President: MacArthur and Truman at the Brink of Nuclear War by H.W. Brands. Bacevich’s background here.

Putting this book on my shopping list after this review, given how much power Trump has given and is likely to give to the military, breaking with civilian control.

That’s it for now. I’m stewing on something else but it’ll be dedicated and not an open thread like this one. Hasta pasta.