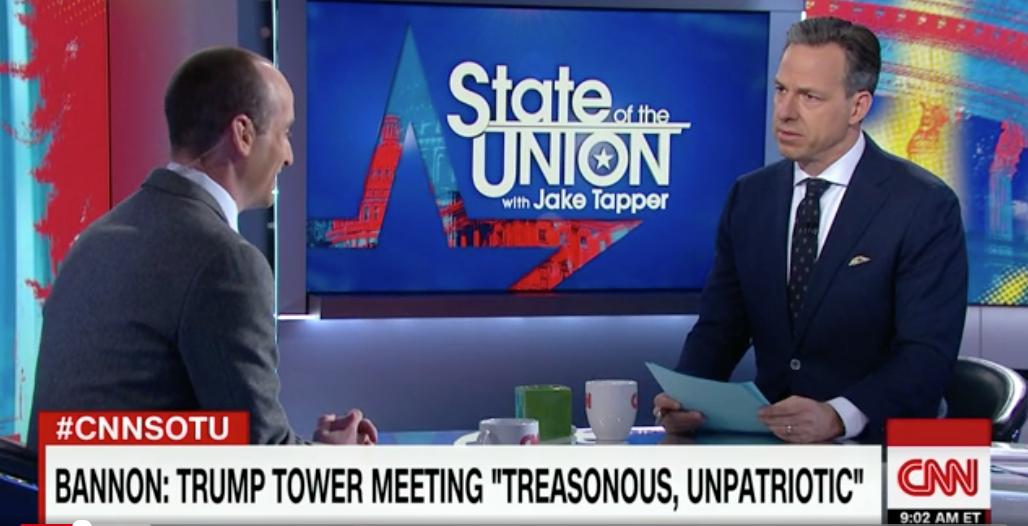 36 seconds into his 12:34 minute interview with Stephen Miller, Jake Tapper asked Miller, “Did President Trump meet with any of the so-called ‘jumos’ who were in that Trump Tower meeting?”

Tapper asked whether Trump had met the Russians again, “Can you just settle that for us?”

Miller responded, “I have no knowledge of anything to do with that meeting.” His response actually answers a different question, not whether Trump ever met with the Russians in it.

As a reminder, on April 25, 2016, 45 days before the Trump Tower meeting, George Papadopoulos told Miller “The Russian government has an open invitation by Putin for Mr. Trump to meet him when he is ready []. The advantage of being in London is that these governments tend to speak a bit more openly in ‘neutral’ cities.” Two days later, the day after Papadopoulos learned the Russians had political dirt in the form of thousands of Hillary emails, Papadopoulos emailed Miller again. “Have some interesting messages coming in from Moscow about a trip when the time is right.”

Miller may have no knowledge of the June 9 meeting itself. But it is almost certainly the case that he knows about negotiations regarding dirt in the form of emails, because he appears to have been the first person on the campaign that Papadopoulos spoke to after learning of them.

And yet, in the 12 minutes of this interview, Miller never managed a denial that Trump had met with the Russians involved in the Trump Tower meeting. 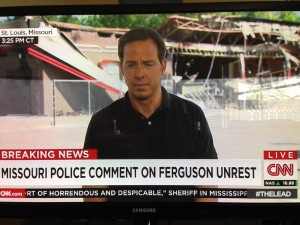 Yammering on the internet is not hard work, in fact it is blindingly (and sometimes maddeningly when it is pointed in your direction) easy. Getting heard, and functionally interacting in a fashion that can contribute to the real focus and discussion, however, is hard. For my part, I often carp enough about the failings of big media that it is only right to give praise where due.

Today credit is due to CNN’s Jake Tapper. Because he cares.

Two nights ago, rightly or wrongly …. but I think rightly … I laid into CNN for their overbearing focus on repetitive, and somewhat mindless, continuing drivel on celebrity. That was, of course, in relation to Robin Williams’ death. A noteworthy, sad, and tragic event for sure, but there was only so much news, the rest was pure Entertainment Tonight like pathetic drivel.

So I went after CNN, and I tacked Jake Tapper’s twitter handle on the end. I did so not because I thought he was the prime offender producing the overall CNN news product, but because I knew, from prior interaction, that Jake actually gives a damn and and is a contact point at CNN who would care. And maybe…maybe…be a change point. That was both fair, and unfair to him personally, at the same time.

I am pretty sure both CNN and Jake were bombarded by by an untold number of missives of the same variety. I don’t how how other inflection points at CNN dealt with what was surely a lot of feedback, but the fact Mr. Tapper took the time to take umbrage, and discuss…and think…seems significant and admirable to me. And I admire that.

I thought about writing this post long before I saw the following, but I was off with clients and court appearances, and could have easily shined it on, as I do with so many posts I want to write but don’t get to.

Until I saw something from Mr. Jake Tapper today that was just awesome.

But then, not long later, came this:

Well, to be sure, this is the stuff even a critic of journalism can love and applaud. You know why? Because not only is solidarity with journalists under grand jury and governmental oppression admirable (I have some experience in GJ targeting), it is the only, and only proper, thing that can be done.

There are not many out there to be so applauded. Maybe tomorrow there will be an issue, and moment of difference, on a different case. So it goes, and so be it.

But, now, James Risen stands exposed and on his own. As a man, and as a journalist, Tapper stood up and gave public square to his voice. Good on him.

Tonight, I am glad Jake Tapper is out there and is willing to engage. Tonight he did one hell of a report from Ferguson Missouri. Even if a big part was consumed by press conference feed. But, before and after, he made his voice clear. That is not exactly a common thing. It is to be commended.

Give the man credit, he was there, and he cares. And I will buy him a drink.

We take broadside shots at the press fairly regularly, both directly and as a vehicle for explaining ills and issues surrounding the government and, at least in my case, law. And there have been plenty of said shots aimed at the White House press over the years (stenographers!) and, pretty much, well earned. But fair is fair, and when there is good work done, it should be pointed out every now and then too. Today is a day for that.

At today’s White House press briefing, Jake Tapper of ABC News bored straight into WH Press Secretary Jay Carney, and it was a thing of beauty. The briefing opened with Carney evincing praise for the two journalists who died last night covering the Syrian popular uprising and resultant government crackdown and oppression, Marie Colvin and Rémi Ochlik as well as the New York Times’ recently deceased, Anthony Shadid. There is little doubt but that Carney, and the White House, have genuine sadness over the deaths. But Carney, on behalf of the White House, was taking it further and using them as shaded vehicle for political posturing and Tapper flat out called him on it. The exchange transcript, from Jake and ABC News:

TAPPER: The White House keeps praising these journalists who are — who’ve been killed –

TAPPER: You’ve done it, Vice President Biden did it in a statement. How does that square with the fact that this administration has been so aggressively trying to stop aggressive journalism in the United States by using the Espionage Act to take whistleblowers to court?
You’re — currently I think that you’ve invoked it the sixth time, and before the Obama administration, it had only been used three times in history. You’re — this is the sixth time you’re suing a CIA officer for allegedly providing information in 2009 about CIA torture. Certainly that’s something that’s in the public interest of the United States. The administration is taking this person to court. There just seems to be disconnect here. You want aggressive journalism abroad; you just don’t want it in the United States.

CARNEY: Well, I would hesitate to speak to any particular case, for obvious reasons, and I would refer you to the Department of Justice for more on that.
I think we absolutely honor and praise the bravery of reporters who are placing themselves in extremely dangerous situations in order to bring a story of oppression and brutality to the world. I think that is commendable, and it’s certainly worth noting by us. And as somebody who knew both Anthony and Marie, I particularly appreciate what they did to bring that story to the American people.
I — as for other cases, again, without addressing any specific case, I think that there are issues here that involve highly sensitive classified information, and I think that, you know, those are — divulging or to — divulging that kind END_OF_DOCUMENT_TOKEN_TO_BE_REPLACED

It strikes me as necessary to follow up a bit on the death of the Dawn Johnsen nomination to lead the Office of Legal Counsel at the Department of Justice. Specifically, it needs to be clear the conventional wisdom of the main media, and even a surprising number of normally more clear headed progressive bloggers, that the nomination failed because of opposition from Republican obstruction coupled with opposition by Ben Nelson, is completely and patently false.

The false meme was already in play with the first substantive reporting by Sam Stein at Huffington Post as I noted yesterday. It is being propagated by the Washington Post (Republicans and “moderate lawmakers”), the New York Times (conservatives and two Democrats), even progressive stalwarts like Glenn Greenwald and McJoan at DKos have discussed the effects of the Republicans and Ben Nelson on the torpedoed nomination (although, to be fair, neither ascribes full blame on the GOP and Nelson).

Perhaps the best example of purveying the false wisdom comes from Jake Tapper at ABC. Tapper, in an article supposedly about the Obama White House not having the stomach for a fight on Johnsen, nevertheless proceeds to regurgitate the usual suspects:

Senate Republicans opposed her nomination overwhelmingly, meaning Senate Majority Leader Harry Reid, D-Nev., needed 60 votes to bring her nomination to the floor of the Senate for a vote.

The White House put all the blame on the Republican minority — White House spokesman Ben LaBolt said, “Senate Republicans will not allow her to be confirmed” — but it was a bit more complicated than that.

A Senate Democratic leadership source said that throughout 2009 two Democrats said they would vote against her — Sen. Ben Nelson, D-Neb., and Sen. Arlen Specter, D-Pa. The only Republican of the 40-member GOP caucus who said he would vote for her was her fellow Hoosier, Sen. Dick Lugar, R-Ind.
…..
Specter remained opposed to Johnsen’s nomination even after he switched parties in April 2009, but his primary opponent Rep. Joe Sestak, D-Pa., began to attack Specter for his opposition to her nomination.

Johnsen’s nomination expired at the end of 2009, but in January 2010 Specter said he’d vote for her.

This is a bunch of bunk. I have previously written extensively on why there were at least 60 votes for Johnson’s confirmation for the entire second half of last year after Al Franken was sworn in, and why there still were 60 votes for her confirmation this year upon Obama’s renomination, even after the Scott Brown victory in Massachusetts. If you have any question, please click through and refer to those articles; for now though, I want to revisit the false light being painted on Ben Nelson and Arlen Specter on the nomination’s failure. END_OF_DOCUMENT_TOKEN_TO_BE_REPLACED