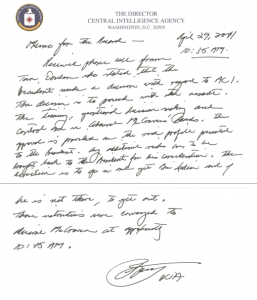 Coming so quickly on the heels of Lt. Col. Daniel Davis documenting the depraved level of lying that characterizes the primary mode of action for many at the top levels in our military, it’s galling that Admiral William McRaven would take to the front page of today’s New York Times to advance his efforts–hilariously and tragically labeled by the Times as a “quiet lobbying campaign”–to gain an even freer hand for the Special Operations Command, which he heads.

Never forget that it was from within Special Operations that Stanley McChrystal shielded Camp NAMA, where torture occurred, from the International Committee of the Red Cross. Never forget that it was Special Operations who instituted the dark side of the COIN (counterinsurgency) campaign in Afghanistan that relied on poorly targeted night raids that imprisoned and tortured many innocent civilians. Never forget that Dick Cheney and Donald Rumsfeld bypassed the normal chain of command to work directly with Stanley McChrystal when he headed JSOC, sending McChrystal on missions not reported to area command. This relationship with Cheney and Rumsfeld had a strong effect on JSOC, as noted by Jeremy Scahill:

Wilkerson said that almost immediately after assuming his role at the State Department under Colin Powell, he saw JSOC being politicized and developing a close relationship with the executive branch.

Among the military commanders being bypassed by Cheney and Rumsfeld was the head of SOCOM, the position that McRaven (who was McChyrstal’s deputy when most of McChrystal’s war crimes were carried out) now occupies, but this same attitude of teaming with the executive branch to bypass the regular defense chain of command has survived intact.

Today’s article in the Times opens this way:

As the United States turns increasingly to Special Operations forces to confront developing threats scattered around the world, the nation’s top Special Operations officer, a member of the Navy Seals who oversaw the raid that killed Osama bin Laden, is seeking new authority to move his forces faster and outside of normal Pentagon deployment channels.

The officer, Adm. William H. McRaven, who leads the Special Operations Command, is pushing for a larger role for his elite units who have traditionally operated in the dark corners of American foreign policy. The plan would give him more autonomy to position his forces and their war-fighting equipment where intelligence and global events indicate they are most needed.

At least the Times does pay a short homage to the quaint, old way of the chain of command as it currently exists:

While President Obama and his Pentagon’s leadership have increasingly made Special Operations forces their military tool of choice, similar plans in the past have foundered because of opposition from regional commanders and the State Department. END_OF_DOCUMENT_TOKEN_TO_BE_REPLACED

Given the defeat of the Udall Amendment, it looks likely the Defense Authorization will include provisions mandating military detention for most accused terrorists (though the Administration has already doubled down on their veto threat).

So I’d like to look at an aspect of the existing detainee provision language that has gotten little notice: the way it requires the Administration to create a paper trail that would prevent it from ghosting–disappearing–detainees. In many ways, this paper trail aspect of the detainee provisions seems like a justifiable response to the Administration’s treatment of Ahmed Abdulkadir Warsame.

The Administration unilaterally expanded detention authorities in its treatment of Warsame

As you recall, Ahmed Abdulkadir Warsame is a Somali alleged to be a member of al-Shabab with ties with Al Qaeda in the Arabian Peninsula. When the Administration detained Warsame, al-Shabab was not understood to fall under the 2001 AUMF language. The Administration effectively admitted as much, anonymously, after he was captured.

While Mr. Warsame is accused of being a member of the Shabab, which is focused on a parochial insurgency in Somalia, the administration decided he could be lawfully detained as a wartime prisoner under Congress’s authorization to use military force against the perpetrators of the Sept. 11, 2001, attacks, according to several officials who spoke on the condition of anonymity to discuss security matters.

But the administration does not consider the United States to be at war with every member of the Shabab, officials said. Rather, the government decided that Mr. Warsame and a handful of other individual Shabab leaders could be made targets or detained because they were integrated with Al Qaeda or its Yemen branch and were said to be looking beyond the internal Somali conflict.

Senator Lindsey Graham, Republican of South Carolina, said in an interview that he would offer amendments to a pending bill that would expand tribunal jurisdiction and declare that the Shabab are covered by the authorization to use military force against Al Qaeda.

So to begin with, Warsame was detained under AUMF authority that one loud-mouthed, hawkish member of the SASC didn’t believe was actually included under it.

And then there’s the way the Administration ghosted Warsame for 2 months.

The US captured Warsame on April 19, then whisked him away to the amphibious assault ship, the Boxer, where he was interrogated by members of the High Value Detainee Interrogation Group (which, remember, includes DOJ, Intelligence, and military members) for two months. END_OF_DOCUMENT_TOKEN_TO_BE_REPLACED

Vice Admiral William McRaven, the Commander of the Joint Special Operations Command–which has been celebrated for the last two weeks for its role in getting Osama bin Laden–told Marc Ambinder (who has long been one of the most informative writers on JSOC and wrote a detailed profile of them last week)–that he’d like JSOC to return to the shadows … soon.

Vice Adm. William McRaven, JSOC’s commanding general, expected a degree of exposure before the raid but hopes that his command’s 15 minutes of fame are over soon, two military officials said.

Though some other JSOC officers are not so sure they want to return to complete obscurity.

Some senior JSOC officers are prepared to deal with a future that includes more openness about their operations.

But it does seem rather remarkable that, after almost two weeks of barely anonymized national security sources leaking like justifiably proud sieves, someone has decided there has been enough.

Ambinder describes several details that national security types now worry may have revealed too much. Obama revealing–indirectly–that the special features on the Blackhawk we lost cost $10 million. The revelation that OBL relied on thumb drives to give couriers to transport his emails to a remote location to be sent. Or this list of CIA-related issues: “the existence of a CIA safe house in Abbottabad, the use of a sophisticated drone to surveil the compound, and the extent to which the CIA was able to monitor what was happening inside.”

But I wonder whether this newfound sensitivity–and the blame placed by “some” on the “dozens of [members of Congress] who have been given extensive briefings on the intelligence and the raid,” rather than the White House personnel who have obviously been behind most of the leaking, doesn’t have to do with stories like this coming out, with CBS’s animated simulation of the raid complete with details taken from the operatives’ head cameras:

In other words, we’re beginning to learn solid details that undercut the narrative the government has been trying to tell for the last two weeks.

I also wonder whether the leak of several month old intelligence showing OBL doesn’t trust or care for Anwar al-Awlaki, who we keep trying to kill because of a purported relationship between the two, has renewed national security types’ concern about leaking.

Most of the leaking so far has fit under the Bob Woodward rule that says no secret is too sensitive if it makes the high level person who authorized the leak look good. Or if it makes the country’s nemesis look like a dirty old man (though doesn’t our country already know that religious conservatives tend to be dirty old men?)

But as is typical, as soon as the flood of leaks starts to solidly challenge the preferred narrative, all of sudden leaks get to be a problem again.

Which says the leaks are probably just starting to get interesting.