The #FakeNews about Iraqi WMD Got Hundreds of Thousands Killed 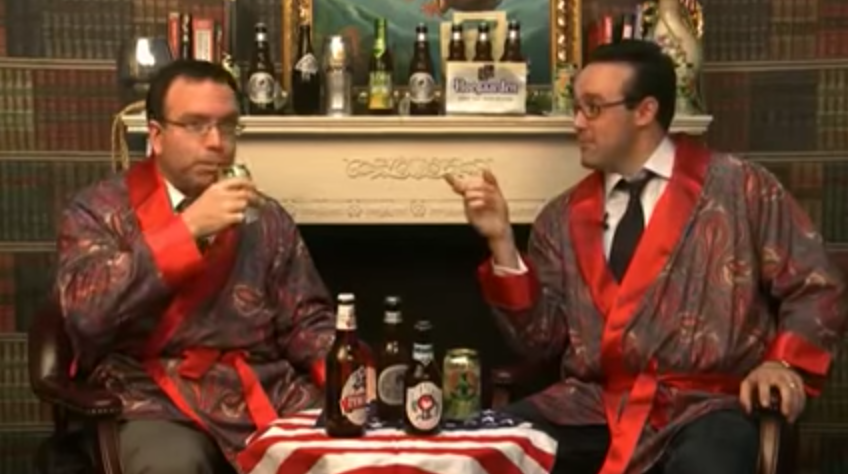 This morning, Dana Milbank — who used to have a podcast with Chris Cillizza on which he once suggested Hillary would choose to drink Mad Bitch beer —  wrote a piece warning of the dangers of fake news.

After writing about a threatening email he received, Milbank considered whether episodes like the attack on Comet Ping Pong — which he described as “the family pizza place in Northwest Washington I’ve been frequenting with my daughter ever since she was a toddler a decade ago” — were the new normal. Milbank described the role of Alex Jones in making a “bogus and bizarre accusation” against Hillary. Then he turned the attack on Comet Ping Pong, in part, into an attack on the media.

This would appear to be the new normal: Not only disagreeing with your opponent but accusing her of running a pedophilia ring, provoking such fury that somebody takes it upon himself to start shooting. Not only chafing when criticized in the press but stoking anti-media hysteria that leads some supporters to threaten to kill journalists.

The man whose “Mad Bitch beer” comment targeted Hillary ended his piece by scolding Trump for fueling rage against Hillary and those who support her.

If Trump were a different leader, he would declare that political violence is unacceptable in a free society. Perhaps he’d say it after eating a “Steel Wills” pie at Comet.

But instead he continues to fuel rage against his opponents and his critics.

On Twitter, Peter Singer — who wrote a very worthwhile book that uses fiction to lay out near term threats to the US  — RTed Milbank’s story with the comment, “stop winking and nodding” at fake news because it can get people killed. 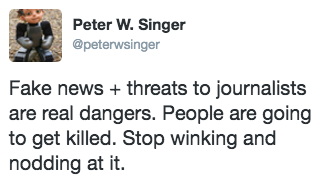 Singer works at New America Foundation, but he used to work at Brookings Institution, which employs people like Michael O’Hanlon and Charles Lister to write propaganda, funded in part by Qatar, designed to generate support for endless wars in the Middle East.

In response to Singer’s tweet, I RTed it and pointed out that “The #fakenews about Iraqi WMD DID get hundreds of thousands killed.” That in turn led to some interesting discussions, most notably with Zeynep Tufekci, who claimed that by “conflating two very, very different types of failure” I was being unhelpful because those different kinds of fake news operated via different mechanisms.

Until you remember that a week before the election, Fox’s Bret Baier, who eight months earlier had moderated a GOP primary debate, reported that the investigations into Hillary “will continue to likely an indictment.” While Baier retracted the claim just over a day later, the claim was among the most damaging pieces of fake news from the campaign, not least because it confirmed some of what the most inflammatory social media claims were saying and magnified the damage of Jim Comey’s irresponsible announcement about finding new emails.

Indeed, while it shows remorse after some of the worst cases, the traditional news media still lapses into the habit of reporting fake news, often in a tone of authority and using an elite discourse. Such lapses usually happen when a kind of herd instinct or a rush to get the news first sets in, leading news professionals to tell fake news stories.

And, now that social media has given average news consumers the ability (and after financialization has led to the disappearance of reliable local news), average news consumers increasingly bypass news professionals, listening instead to the stories they want to hear, told in a way that leads them to feel they are assuming a kind of self-control, told in a language and tone they might use themselves. At its worst — as in the case of PizzaGate — a kind of herd instinct sets in, with news consumers reinforcing each others’ biases. On Sunday, that almost got a lot of innocent people — families like Milbank’s own — killed.

But as we try to deal with our herd instincts and the mistakes we all make (myself very much included), we might do well to exhibit a little less arrogance about it. That certainly won’t eliminate the mistakes; we are, ultimately, herd animals. But it might provide a basis to rebuild some trust, without which leads all of us — the professionals and the average news consumers — further into our own bubbles.