The ObamaCare Not Comey Effect 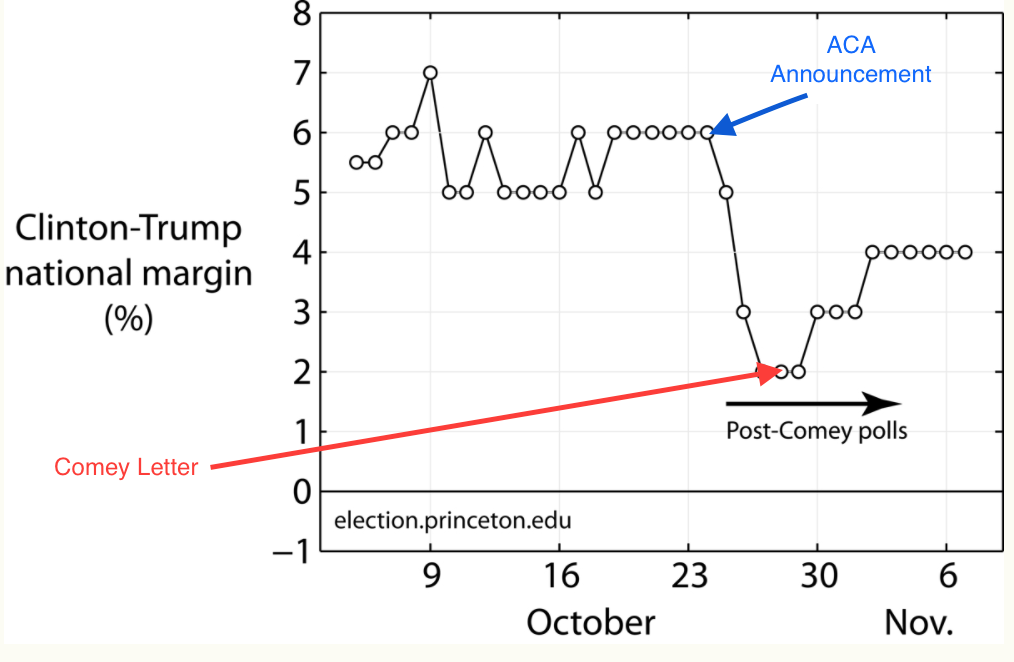 Just after the election I did two posts considering the relative impact of the Jim Comey letter announcing FBI was reviewing the Anthony Weiner derived emails and the announcement of a huge ObamaCare premium spike.

I still think we don’t have enough data about the relative effect of the two events.

But a number of people are pointing to this post from Sam Wang, which ends,

In the above graph of the Comey effect, each point shows the median margin for polls that were in the field on that day. As you can see, the immediate effect of Comey’s letter was a swing toward Trump of 4 percentage points, about half of which stuck. This was enough to swing Michigan, Pennsylvania, Florida, and Wisconsin. It seems likely that Comey’s letter was a critical factor in the election outcome.

Nowhere in the post does Wang note what date Comey sent his letter, though. It was October 28.

Unless Wang’s chart is totally mislabeled (Update: In an “explanation” added to his post, Wang effectively says his graph is off by three — though not four — days due to the way he presents multi-day polls; he has, at least, now told his readers when the actual letter came out) but what it shows seems to be consistent with what I showed in this post, which shows a Hillary dip and a Trump spike moving in concert on before October 28), then his chart show doesn’t support a Comey effect at all — it shows the opposite. The differential started narrowing after October 24. By October 28, when the letter was released, the differential had plateaued before it turned up again.

As it turns out, the ObamaCare spike was announced on October 24 (and reported heavily starting October 25).

That’s precisely when we see the differential moving.

If we’re assuming an immediate response in polls in response to an event, then the ObamaCare premium spike would be a far better explanation than the Comey letter, which took place later.

Frankly, I suspect both had an impact, and further suspect there may have been something else driving the differential late turn to Trump in the Rust Belt. And I suspect we still don’t have the data to explain what made a bunch of Rust Belt voters move to Trump right before the election.

Week 14 Trash Talk Why Is CIA Avoiding the Conclusion that Putin Hacked Hillary to Retaliate for...