Trump Is Willing to Pay for Joint Defense for Hope Hicks, But Not for France

I keep coming back to this exchange between Dana Bash and Rudy Giuliani over the weekend.

BASH:  But let’s just focus on one of the things that you said…

BASH: … that there is no evidence — you say that the special counsel hasn’t produced evidence.

BASH: But this is an ongoing investigation. We don’t really know what they have and what they don’t have. That’s fair, right?

They have nothing, Dana. They wouldn’t be pressing for this interview if they had anything. [my emphasis]

Rudy asserts that every critical witness is a member of a Joint Defense Agreement involving Trump.

That’s a big Joint Defense Agreement. It also suggests that if Mueller can learn who is in it, he’s got a map of everyone that Trump himself thinks was involved in the conspiracy with Russia.

Some people will be obvious — not least, because they share lawyers. Witnesses with shared lawyers include:

Others are obvious because we know they’re centrally involved — people like Jared Kushner (represented by Abbe Lowell) and Hope Hicks (represented by Robert Trout). Indeed, Hicks may also fall into the category of shared lawyers — at least from the same firm — as Trout Cacheris & Janis got paid $451,779 by the RNC in April for representing Hope and two other witnesses.

One implication from this (which would be unbelievable, if true) is that Paul Manafort remains a part of the Joint Defense Agreement. But that is the only way that Trump can assess his vulnerability — as he has in the past, and appears to have shared with the Russians — to go exclusively through Manafort. 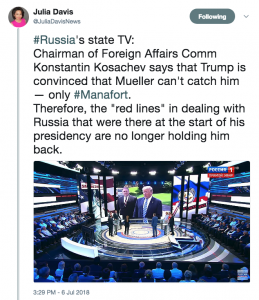 There are other implications of claiming that every critical witness is part of the Joint Defense Agreement — including that the Attorney General (represented by Iran-Contra escape artist lawyer Charles Cooper) must be part of it too. So, too, must Stephen Miller (defense attorney unknown).

But here’s the really telling thing. A key part of Trump’s foreign policy — one he’ll be focusing on relentlessly in advance of next week’s NATO summit — is that other members of the United States’ alliances are freeloaders. He’s demanding that NATO members all start paying their own way for our mutual defense.

But Trump is willing to make sure that those protecting him get paid (even if he’s not willing to pay himself). (I stole this observation from an interlocutor on Twitter.)

Which is saying something about what Trump is willing to do when he, himself, is at risk.