The Mueller Investigation: What Happens on September 7? 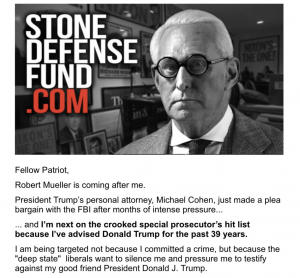 I hesitate to write this post, partly because I think it’s a good idea to dismiss every single thing that Rudy Giuliani says, and partly because we’ve all learned that it is sheer folly to pretend anyone can anticipate what Mueller will do, much less when.

Nevertheless, I wanted to address questions about what might happen in the next two weeks, as we approach the 60-day mark before midterm elections.

Rudy G is wrong about everything

The aforementioned Rudy G, who has been saying that Mueller has to shut down his entire investigation (or even finish up and go home) on September 1 on account of DOJ’s policy against overt investigative action close to an election.

As I said, the policy only prohibits overt acts, and only 60 days before the election. Mueller might argue that it’s entirely irrelevant, given that none of his known targets (save, perhaps, Dana Rohrabacher) are on the ballot. But enough credible journalists have suggested that DOJ is taking this deadline seriously with respect to Trump’s associates (including Michael Cohen in SDNY, where DOJ actually leaks), that it’s probably correct he’ll avoid overt acts in the 60 days before the November 6 election.

But that timeline starts on September 7, not September 1.

One thing we know will dominate the press in that pre-election period is Manafort’s DC trial, scheduled to start on September 17.

While I still don’t think he will flip, he is stalling in both his trials. In EDVA, he asked for and got a 30-day deadline to move for an acquittal or mistrial. He may have done so to provide extra time to consider the complaints raised by one juror that others were deliberating before they should have, which Manafort had asked for a mistrial over. If that’s right, juror Paula Duncan’s comments, describing the one holdout and explaining that even she, a Trump supporter, found the case a slam dunk, may persuade Manafort that challenging this trial won’t bring about any other result and may mean he gets convicted on the remaining 10 counts.

In any case, however, by getting 30 days to decide, Manafort moved the deadline from (by my math) September 3 to September 21, when he’s scheduled to be deep into the DC case (and therefore too busy to submit such a motion). It did, however, move the decision date past that September 7 date.

Speaking of the DC case, after getting an extension on the pre-trial statement in that case, Manafort basically punted on many of the substantive issues, effectively saying he’ll provide the required input later.

He may not be flipping, but he’s not prepared to start this trial.

Is it Roger Stone’s time in the barrel?

The big question, for me, is whether Mueller has finished his six month effort to put together a Roger Stone indictment.

Tantalizingly, back on August 10, Mueller scheduled Randy Credico to explain to the grand jury how Stone threatened him about his testimony. That appearance is for September 7. Given how far out Mueller scheduled this, I wondered at the time whether Credico was being slated to put the finishing touches on a Stone indictment.

What might prevent Mueller from finalizing Stone’s indictment, however, is Stone associate Andrew Miller, from whom Mueller has been trying to get testimony since May 9. Miller is challenging his grand jury subpoena; he’s due to submit his opening brief in his appeal on September 7. That might mean that Mueller has to wait. But two filings (District, Circuit), the docket in his subpoena challenge, and this CNN report may suggest they can move forward without first getting Miller’s testimony.

Both the Circuit document and CNN provide more details about a May 9 interview with two FBI Agents, with no attorney present (no offense to Miller, but what the fuck kind of self-described libertarian, much less one in Roger Stone’s immediate orbit, agrees to an FBI interview without a lawyer present)?

Mr. Miller was first interviewed by two agents of the Federal Bureau of Investigation who visited him unannounced on or about May 9, 2018, in Saint Louis, MO, where he resides. He was cooperative, answering all their questions for approximately two hours, and at the conclusion of the interview, was handed a subpoena to produce documents and testify as a witness before the grand jury.

CNN describes that’s what poses a perjury concern for Miller with regards to his testimony before the grand jury because of that original interview.

Miller’s case is complicated by the fact that he initially cooperated with the special counsel’s investigation. When FBI agents first approached him in May, he spoke with them at his home in St. Louis for two hours without an attorney.

Dearn said in an interview that she was just being “carefully paranoid” and protecting her client from accidentally committing perjury if he testifies and contradicts something he told investigators back in May without a lawyer present.

As the District filing seems to suggest, Miller got not one but two subpoenas (???), just one of which called for document production:

Mr. Miller was served with two subpoenas dated June 5, 2018, both requiring his appearance before the Grand Jury on June 8, but only one of which required that he search and bring with him the documents described in the Attachment to one of the subpoenas. See Exhibits 1 and 2. After a filing a motion to quash on grounds not raised herein, this Court issued a Minute Order on June 18 requiring Mr. Miller’s appearance before the Grand Jury on June 29 and to produce the documents requested as limited by agreement of the parties by June 25.

Mr. Miller has since complied with that part of the order producing voluminous documents in a file that is 100MB in size to government counsel on Monday, June 25. In her cover email to government counsel, Aaron Zelinsky, Miller’s counsel stated in pertinent part: “Mr. Miller does not waive and hereby preserves all rights he has to object to the subpoena requiring his appearance before the Grand Jury this Friday…and from any continuing duty or obligation to supply additional documents subject to the subpoena.” See Exhibit 6. Nevertheless, Mr. Zelinsky recently informed counsel that he is not satisfied with this production and is unreasonably requesting additional documents from Mr. Miller.

CNN reported that those documents pertained to WikiLeaks and Guccifer 2.0.

After a protracted back and forth between Dearn and Mueller’s team, Miller handed over a tranche of documents. In turn, the government had agreed to limit its search to certain terms such as Stone, WikiLeaks, Julian Assange, Guccifer 2.0, DCLeaks and the Democratic National Committee, according to court filings and interview with attorneys.

So at the very least, Mueller has 100MB of documents that relate to Wikileaks and Guccifer 2.0 (which raises real questions about how Miller can say he knows nothing about the topic), and 2 hours of testimony that Miller may not want to tell the grand jury now that he has lawyers who might help him avoid doing so.

Meanwhile, there are some filings from the end of his District Court docket.

The Circuit document mostly explains what filings 33, 34, 35, and 37 are (though doesn’t explain why Mueller refused to stipulate that Miller be held in contempt): they’re the process by which he was held in contempt and therefore legally positioned to appeal.

6. Because Mr. Miller desired to appeal the order denying his motion, ensuing discussions with Special Counsel to stipulate that Mr. Miller be held in contempt for not appearing on the upcoming appearance before the grand jury on August 10, 2018, and to stay the contempt pending appeal did not succeed.

7. Consequently, two days before his appearance, on the evening of August 8, 2018, counsel emailed government counsel and Judge Howell’s clerk (and on the following morning of August 9, hand-filed with the clerk’s office), a Motion By Witness Andrew Miller To Be Held In Civil Contempt For Refusing To Testify Before The Grand Jury And To Stay Such Order To Permit Him To Appeal It To The U.S. Court Of Appeals For The District Of Columbia Circuit and citing authorities for granting a stay of contempt. ECF No. 33. The government served and a response on the evening of August 9 ( ECF. No. 35) and Mr. Miller served a reply early morning on August 10. ECF No. 37.

That doesn’t explain what Document 38 is, to which Miller didn’t respond, and in response to which Beryl Howell issued an order.

CNN’s description of Miller’s attorney’s concern seems to split his testimony into two topics: Guccifer and Wikileaks, and Stone’s PACs. Miller’s only worried about legal jeopardy in the latter of those two. (For some details on what the legal exposure might pertain to, see this post.)

[Alicia] Dearn was adamant that Miller not be forced to testify to the grand jury about one topic in specific: Stone. She asked that her client be granted immunity, “otherwise he’s going to have to take the Fifth Amendment,” she said in a court hearing in June.

Aaron Zelinsky, one of Mueller’s prosecutors, noted Miller’s lawyer was making two seemingly contradictory arguments: “On the one hand, that the witness knows nothing, has nothing to hide, and has participated in no illegal activity. On the other hand, that there is a Fifth Amendment concern there.”

In the hearing, Dearn said she was concerned Miller would be asked about his finances and transactions related to political action committees he worked on with Stone.

Miller “had absolutely no communication with anybody from Russia or with Guccifer or WikiLeaks,” Dearn said in an interview.

By process of elimination, the only thing she believes her client could get caught up on are questions about his financial entanglements with Stone and his super PAC.

The Circuit document concedes that Miller may be the subject — but not target — of this grand jury investigation.

12. Lest there be any misunderstanding, Mr. Miller was not a “target of grand jury subpoenas” (Concord Mot. at 1), but rather a fact witness or at most a subject of the grand jury; nor was he a “recalcitrant witness.” Id. at 13. As the foregoing background demonstrates, Mr. Miller has been a cooperative witness in this proceeding.

It would be really weird if Miller really did get two subpoenas, and that’s not consistent with the Circuit document. So it may be there were two topics or crimes described in the subpoena: conspiring with Russia, and running a corrupt PAC. And if Miller’s only personally legally exposed in the latter of those, then it’s possible Mueller would treat these differently.

So it’s possible Mueller got what they need to move forward on the main conspiracy case against Stone, while it has to wait on Miller’s own involvement in Stone’s corrupt PACs until after the DC Circuit reviews things.

The September 7 timing is interesting for two other reasons. First, that’s also the day that George Papadopoulos — whose plea deal covers his lies and obstuction but not any conspiracy case — is due to be sentenced.

Just 10 days later Mike Flynn (whose plea deal was also limited to his lies) has a status report due, just a 24-day extension off his previous one. That timing suggests he’s about done with his cooperation. Perhaps that shortened time frame is only due to his team’s push to get him back earning money to pay for his lawyers again. Perhaps there’s some other explanation.