In a Bid to Jettison Flynn, Trump Suggests Hope Hicks and Steve Bannon Lied to the FBI

With respect, Judge Sullivan, if you’re going to order additional files released, please also ask the government to release a less redacted version of Mike Flynn’s original 302, which is docket #62-1, redacted sections of which (especially pertaining to the meeting at which Jared Kushner asked for a back channel with Russia) appear in unredacted form in the Mueller Report, and which was inexplicably not included in the WaPo request.

In any case, perhaps because Sullivan asked for files that may be very damning (especially if they include the contacts Flynn had with Kislyak before the election, which aren’t discussed in the Mueller Report), Donald Trump now claims he didn’t know Flynn was under a counterintelligence investigation and would have replaced him had he known. 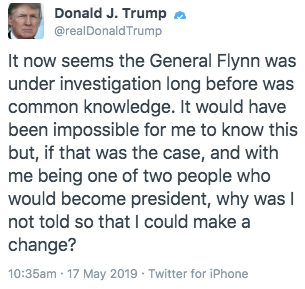 Of course he knew. Obama warned Trump against hiring Flynn on November 10, 2016. And it’s no longer just three former Obama officials who say that. According to the Mueller Report, both Hope Hicks and Steve Bannon not only corroborate that Obama warned Trump, but their FBI testimony makes it clear that Trump was really bugged about Obama’s warning.

No lesser Trump supporter than Bannon says that at the time Mike Flynn called up the Russian Ambassador and undermined the policy the President of the United States had just implemented, Trump was already concerned about the warnings that Obama gave him.

As I have noted, the evidence in the Mueller Report — as well as the silences about most earlier things Flynn did that raised counterintelligence concerns — suggest that Mueller has to believe that Flynn did what he did with Trump’s blessing. Otherwise Mueller would have had abundant evidence that Flynn, while freelancing, hiding that he was freelancing, and lying about it to the FBI, did things that directly benefitted the Russian state and undermined US policy.

Sullivan’s moves (which may be an attempt to explain why he raised such sharp questions about Flynn’s loyalty last December) may reveal evidence to substantiate that.

Which, in turn, may be why Trump is accusing two of his closest aides of lying to the FBI to pretend he didn’t get the warning from Obama they say he did.

Chuck Ross Gets Pissy about Russian Disinformation William Barr Ratchets Up the “Witch Hunt” over an Investigation...