In this post, I noted that for three initial subjects of the FBI’s investigation into Trump associates’ ties with Russia — Paul Manafort, Carter Page, and George Papadopoulos — the campaign gave similar reasons for firing them as the Mueller Report laid out about their behavior.

The fourth initial subject of the investigation is Mike Flynn. The campaign did not fire Flynn for his ties to Russia; in fact, according to some Flynn associates, Trump directed him to reach out to Russia during the campaign.

Nevertheless, last week, Trump complained that he hadn’t been informed that Flynn was under investigation earlier (presumably asking why he wasn’t given a defensive briefing that discussed the investigation into Flynn specifically). 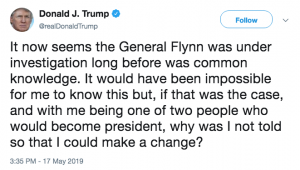 Still, that should in no way undermine the investigation into Flynn.

The Russian side of the investigation into Flynn, partly for his trip to Moscow where he sat with Vladimir Putin in December 2015, goes largely unmentioned in the Mueller Report, suggesting it may have become a counterintelligence investigation into Russia instead.

But we can review the Bijan Kian indictment — which is based significantly off Flynn’s cooperation — to see how sleazy Flynn was acting while ostensibly serving as one of Trump’s top advisors on the campaign trail.

After the failed coup attempt against Recep Tayyip Erdogan in July 2016 — around the same time Flynn was leading chants of “Lock her up” at the RNC — Erdogan was trying to persuade the American government to extradite Fethullah Gulen, using the coup as an excuse to crack down on a source of power that challenged his regime. After DOJ determined there was still no basis to extradite Gulen, Kian, Ekim Alptekin, and some high ranking Turkish officials reached out to Flynn’s consulting company. They asked what kind of spin Flynn and Kian could generate “on the short and mid-term,” but warned not to read anyone else in.

On July 30 — three months before the election — Kian and Flynn pitched a 3-month plan, again emphasizing the secrecy of the project. On August 2 — the same day Trump’s campaign manager got together with someone suspected of ties to Russian intelligence to talk about how to win Michigan and carve up Ukraine — Kian nudged Alptekin, again emphasizing the secrecy. On August 8, Alptekin approached the Turkish government.

This was also the period when Flynn started getting involved in an effort to find Hillary’s deleted emails from any possible source, including foreign intelligence services.

On August 11 — as the Turkish government grew closer to a deal and as Trump’s campaign manager started engaging in bigger and bigger lies to hide that he had been an Agent of Ukraine — Kian changed the name of the project, which had been “Truth” to “Project Confidence” and introduced Alptekin’s company, Inovo, as the funder as a cut-out t0 hide that Turkey was behind the plan. From that point forward, both Trump’s soon-t0-be-former campaign manager and one of his top national security advisors were engaged in subterfuge in an attempt to hide their work for foreign countries. In Flynn’s case, he was doing that work even as he campaigned for Trump.

On August 17, while negotiating a deal with the government of Turkey, Flynn accompanied Trump for his first intelligence briefing.

Flynn’s deal with Turkey was confirmed, with a 20% kickback to Alptekin for his company’s role as a cut-out, on August 25 and 26. When Kian put together the contract for the project on September 3, he set the start date two weeks after they really started it to hide that it was the same project for Turkey.

On September 8, Flynn would politicize the intelligence briefings he was attending with Trump while being paid by Turkey, claiming briefers indicated some policy differences with Obama.

“The intelligence we’ve received in the last two briefings were in stark contrast to the policy decisions being made,” Flynn said.

“They would say the intelligence professionals, as they should, they would say those are policy decisions,” Flynn continued. “So Donald Trump, in a very, very sophisticated way, was asking tough questions, and they would back off and say, ‘That is not our job, those are policy decisions at the—in this case the White House is making.’ And we would sit there and go, OK, we understand.”

Flynn, however, caught some controversy himself when NBC News reported on Thursday that Flynn was unruly in one of the briefings. The report stated that Trump’s transition chief, Chris Christie, had to calm Flynn down after he repeatedly interrupted intelligence officers with pointed questions.

On September 19, Flynn and his partners met with Turkish Foreign Minister Mevlut Cavusoglu and Turkish Energy Minister (and Erdogan son-in-law) Berat Albayrak in New York and discussed how to bring about Gulen’s extradition. James Woolsey, attending the meeting as an advisory board member with Flynn’s firm, described the meeting as “a covert step in the dead of night to whisk this guy away.” Woolsey declined his consulting fee after attending the meeting, in part out of legal concern, and let Joe Biden know about it via a mutual friend.

That was a week before the first Presidential debate.

On October 11, two days after the second presidential debate, the second check arrived, $185,000, with another $40,000 kicked back to Alptekin. Two days later, Flynn started reading from talking points scripted by Kian: funding, “Islamists,” and Mullahs.

On October 22, two days after the third debate, Flynn wrote members of the project team, referencing the Turkish officials who were the real customers for the project.

On November 2, days before Americans went to the polls, Flynn’s cut-out demanded more: private investigative work targeting Gulen’s supporters, congressional hearings on his schools. That same day, Kian sent Alptekin an op-ed he had drafted. Kian told Flynn the next day an editor was tightening it up before showing it to Flynn. November 4, Kian sent it to Alptekin, who loved it.

Flynn signed his name to Kian’s work and it was published in The Hill, blaming Gulen for the attempted coup, invoking “professionals in the intelligence community” viewing “the stamp of terror” in Gulen’s ideology, but the language was really written by Kian. The paid op-ed would go on to complain about Gulen’s “vast network of public relations” and his “false façade.”

On November 10, two days after Flynn’s op-ed and Trump’s victory and the day Obama warned Trump against picking Flynn to be his National Security Advisor, the third check came, another $200,000 to do the bidding of Turkey.

Even after the FARA office started nagging Flynn about registering, he stalled for the entire time he was in the White House, even while engaging Turkey and Russia in their joint peace plan for Syria. When he finally submitted his FARA filing on March 7, 2017, he falsely claimed he had written the op-ed as a public figure, not in the service of Turkey.

Trump may not have fired him. But both his wails that he should have been informed Flynn was under investigation (at a briefing Flynn attended) and that this investigation was in any way without predicate belie the sheer audacity with which Flynn sold his name to the highest bidder even while claiming to work for Trump.

The Logic of Assange’s EDVA Indictment Is Inconsistent with Mueller’s... The FBI Went to Microsoft, not Trump Organization, for Emails Incriminating...