The Steele Dossier and the Mueller Investigation: Carter Page 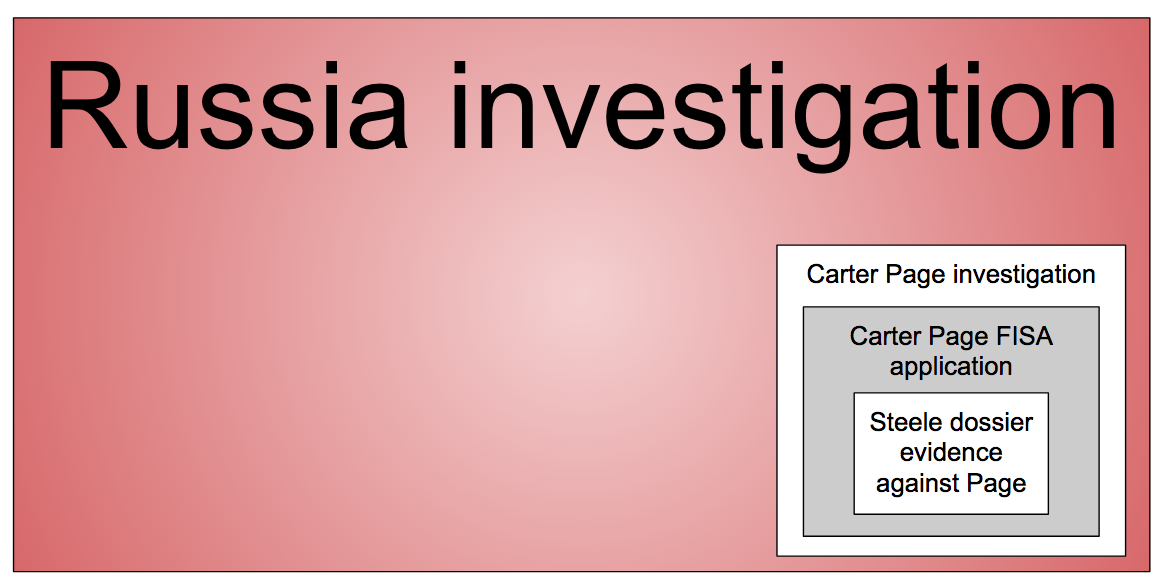 Predictably, the frothy right wants to know whether Robert Mueller investigated the Steele dossier as part of his investigation into the links between Trump’s campaign and Russia’s interference operation in the election, and if not why not. Of the 27 questions Chuck Ross thinks Mueller should be asked about an investigation into Russia’s attack on the US and Trump’s associates ties to Russia, for example, seven are about the Steele dossier in one way or another (while repeating some of the past errors he has made about the dossier).

In his initial question, for example, he asserts as fact both that the FBI was investigating whether Russia was blackmailing Trump and whether there was a well-developed conspiracy of cooperation between Trump and the Kremlin because of the dossier, and suggests that the dossier would be the only reason to investigate such things.

How important was the Steele dossier to the overall investigation?

The FBI relied on the dossier, which was authored by former British spy Christopher Steele, to obtain four Foreign intelligence Surveillance Act (FISA) warrants against former Trump campaign aide Carter Page. The FBI also investigated the allegations in the dossier that the Kremlin was blackmailing Donald Trump and that the campaign was involved in a “well-developed conspiracy of co-operation” with Russia to influence the election.

Mueller’s report all but debunked several key allegations in the dossier. That poses a potential problem for investigators if the probe relied heavily on Steele’s reporting.

Leave aside the presumptions in this question. I’d like to take it on its face and — in a series — show what the public record suggests about the relationship between dossier allegations and the investigation into five people:

Here’s my logic for focusing on these five. Obviously, the dossier had a role in the Carter Page investigation — though the continued classification of his FISA application permits Republicans to claim it had a larger role than it actually did. I actually suspect the dossier may have had a larger influence on the rapid progress of the investigation into Michael Cohen than Page. The public record on the investigation into Paul Manafort shows the opposite: FBI didn’t get around to substantiating real evidence that could, even still, support dossier claims about him until relatively late in the investigation. Similarly, the real investigation into Flynn seems to have led rather than followed any real inquiry into the sole allegation about Flynn in the dossier, but that’s likely because that allegation was regurgitated public reporting. Roger Stone — who doesn’t show up in the dossier at all, in spite of his public claims to have advance knowledge of what would be released — provides a useful counterpoint to show what an investigation that could not be influenced by the dossier would look like.

We won’t know for sure until either Bill Barr declassifies all the details about the role of the dossier in the investigation or Jason Leopold or Judicial Watch liberates those details in FOIA. But what we know thus far shows that the FBI generally proceeded based on real predication.

The timelines below also appear in combined form in this page.

Much of the public focus of the dossier’s discussion of Page is on an allegation he’d get to broker the Rosneft sale and his alleged meeting with Igor Sechin.

According to SECHIN’s associate, the Rosneft President (CEO) had raised with PAGE the issues of future bilateral energy cooperation and prospects for an associated move to life Ukraine-related western sanctions against Russia.

[October 18 report] SECHIN’s associate said that the Rosneft President was so keen to lift personal and corporate western sanctions imposed on the company,  that he offered PAGE/TRUMP’s associates the brokerage of up to a 19 per cent (privatised) stake in Rosneft in return. PAGE expressed interest and confirmed that were TRUMP elected US president, then sanctions on Russia would be lifted.

This stuff does get mentioned in Page’s FISA application. But the unredacted discussion of the alleged meeting quotes from the July 19 report directly, not the October 18 one.

[redacted] reported that, during the meeting, Page and Sechin discussed future bilateral energy cooperation and the prospects for an associated move to lift Ukrainian-related Western sanctions against Russia.

Given the week lead time for preliminary application to the FISA Court and the known dates when Steele briefed the FBI, this is unsurprising, as the second report — the one everyone now focuses on — would seem too late to get into an application approved on October 21.

So while the claim that Russia offered Page energy deals for sanctions relief is part of the application, the visible parts of that initial FISA application use the dossier allegations somewhat differently: to suggest a tie between the alleged offer of “kompromat” on Hillary and the policy stances Trump took in July and August. The logic in the application looks like this:

Here’s how the “kompromat” language tied to Page appeared in the dossier.

[A] senior colleague in the Internal Political Department of the PA, DIVYEKIN (nfd) also had met secretly with PAGE on his recent visit. Their agenda had included DIVEYKIN raising a dossier of ‘kompromat’ the Kremlin possessed on TRUMP’s Democratic presidential rival, Hillary CLINTON, and its possible release to the Republican’s campaign team.

That is, this offer, in a report dated July 19, looked just like what had happened to Papadopoulos three months earlier: at an alleged meeting that would have taken place weeks before before Russian-stolen emails actually did get released, Russians purportedly offered to share dirt on Hillary with someone publicly identified as a foreign policy advisor on the Trump campaign. Both the alleged offer (dated July 7 or 8) and the report (dated July 19) would look to have predicted what happened on July 22, just as the Papadopoulos offer of dirt did (though, unlike the Papadopoulos dangle, Steele’s report did not predict that the dirt was stolen emails; it said the dirt was FSB intercepts from Hillary’s trips to Russia).

And in response to that, seemingly, Trump changed his policy to be more friendly to Russia.

So to the FBI, Page looked like someone who had, in the past, confessed he’d be happy to share information with Russian spies, who had been brought to Moscow for an event well above his pay grade, who had a known desire to be a player in the Russian energy market (which is how Russia recruited him in 2013). The Steele dossier allegations made it look like the same thing that had happened to Papadopoulos happened to Page as well. And Trump’s public stances in the aftermath looked like his foreign policy, under the advice of the guys who had gotten these dangles, was becoming more Russian friendly, possibly as a result.

And with Page, the FBI had two things they did not yet have with Papadopoulos: someone no longer claimed to be tied to the campaign, and someone with an 8-year track record of showing willingness to respond to Russian entreaties.

Both Sheldon Whitehouse and Trey Gowdy — who are, notably, fairly hawkish former prosecutors — have said there was plenty of evidence to justify a FISA order on Page aside from the dossier, though Gowdy has more recently said that a transcript of Papadopoulos’ meeting with Stephan Halper where he says being involved in this would amount to treason is somehow exonerating of either Papadopoulos or Page (which is really hard to understand). So Page might have been targetable on his own right in any case. But it’s clear that the Steele dossier claim that Page had been offered dirt on Hillary, just as Papadopoulos had, made it look like a pattern, and made it look like it was tied to Trump’s public foreign policy stances taken late enough such that he may have been influenced by his two foreign policy advisors who had been offered dirt.

And once FBI started investigating, Page would look still worse. That’s because the FBI would eventually have found evidence that would seem to corroborate this theory in several ways:

That is, the FBI would obtain (in significant part through ongoing FISA collection) that Page continued to meet with senior Russians, discussing both policy changes that FBI suspected might be a response to receiving dirt on Clinton, and business deals that would benefit him personally.

All that raises questions about what the Steele allegations against Page were.

It’s possible the report on his meetings in Moscow were the end result of a game of telephone — a hazard of Steele’s remote HUMINT collection — translating the real Dvorkovich meeting into the alleged Diyevkin one. It’s possible it’s disinformation, an effort to use Page (whom Peskov had already determined wasn’t senior enough to merit Kremlin attention) as a way to taint Trump or confuse the FBI and a presumed future Hillary Clinton Administration; if that’s the case, then it may have been generated by someone with a knowledge of both the real operation itself and the contents of the SVR files explaining how you’d recruit Page if you wanted to do so, with business deals.

Or it’s possible there’s some there there: in both sections on Page, there are significant redactions of what must be Page’s grand jury testimony, and in the discussion of charging decisions, the Mueller Report suggests that Page would have been a willing recruit.

And while the Mueller Report never comments on the corroboration, or not, of any Steele claims, with regards to Page, the conclusion remains particularly non-committal.

The Office was unable to obtain additional evidence or testimony about who Page may have met or communicated with in Moscow; thus, Page’s activities in Russia–as described in his emails with the Campaign–were not fully explained.

In other words, Mueller never ruled out the dossier being correct.

The Steele dossier was clearly a part of the reason why FBI decided to open a full investigation into someone they had had counterintelligence concerns about going back 8 years and as recently as March 2016. But that was largely because the Steele allegations paralleled the reported events involving George Papadopoulos. And every source seemed to corroborate the allegations: the Trump campaign’s false denials of Page’s involvement in the campaign, Russian efforts to cultivate him using precisely the enticements the SVR identified back in 2013, and Page’s own instinct to oversell his access. All provided seeming corroboration of the dossier.

That said, there’s a problem with asking about the centrality of the Steele dossier on Mueller’s investigation of Page. That’s because Page was already aggressively investigated before Mueller took over. The only steps taken by Mueller that are recorded in the Report are interviews with the people who interacted with Page in his July 2016 trip to Moscow: Denis Klimentov on June 9, 2017, Shlomo Weber on July 28, 2017, and apparently one of Weber’s family members in June 2017. In addition, Page appeared before a grand jury, though it’s not clear whether that happened in March or after Mueller’s appointment.