On CNN’s WikiLeaks Exclusive: Remember the Other Document Dumps

CNN has a report on leaked security records describing some of the visitors and improved computer equipment Julian Assange got in 2016, as Russia was staging the election hack-and-leak. The story is a better expose of how increased pressure from the US and a change of president in Ecuador dramatically changed Assange’s freedom to operate in the Ecuadorian Embassy in London, with many details of the internal Ecuadorian politics, as it is proof of anything pertaining to the hack-and-leak.

As for the latter, the story itself insinuates ties between WikiLeaks and Russia’s hack-and-leak operation by matching the profile of Assange’s known (and dramatically increased number of) visitors in 2016 with the timing of those visits. Those people are:

These visitors have, in generally, been identified before, and with the exception of Müller-Maguhn, CNN doesn’t give the precise dates when people visited Assange, instead providing only screen shots of entry logs (which, CNN notes, key visitors wouldn’t be on). The exception is Müller-Maguhn, whose pre-election visits the TV version lists as:

And, yes, some of those visits match the known Russian hack-and-leak timeline in enticing ways, such as that Müller-Maguhn, who told WaPo that, “he was never in possession of the material before it was put online and that he did not transport it,” showed up the same day Mueller documents describe WikiLeaks obtaining an archive that had been uploaded (“put”) online and by that means transferred to WikiLeaks.

But that would be entirely consistent with Müller-Maguhn helping to process the emails — something the Mueller team determined did not violate US law — not serving as a mule. Not that Müller-Maguhn would be best used as a mule in any case.

The descriptions of the changes in computer and other gear are more interesting: with Assange bumping up his resources on June 19, a masked visitor dropping off a package outside the embassy on July 18, and exempt WikiLeaks personnel removing a ton of equipment on October 18, as Ecuador finally threatened to shut WikiLeaks down.

Shortly after WikiLeaks established contact with the Russian online personas, Assange asked his hosts to beef up his internet connection. The embassy granted his request on June 19, providing him with technical support “for data transmission” and helping install new equipment, the documents said.

Days later, on July 18, while the Republican National Convention kicked off in Cleveland, an embassy security guard broke protocol by abandoning his post to receive a package outside the embassy from a man in disguise. The man covered his face with a mask and sunglasses and was wearing a backpack, according to surveillance images obtained by CNN.

The security documents lay out a critical sequence of events on the night of October 18. Around 10 p.m., Assange got into a heated argument with then-Ecuadorian Ambassador Carlos Abad Ortiz. Just before midnight, Abad banned any non-diplomatic visitors to the embassy and left the building. Behind the scenes, Assange communicated with the foreign minister in Quito.

Within an hour of Abad’s departure, he called the embassy and reversed the ban.

By 1 a.m., two WikiLeaks personnel arrived at the embassy and started removing computer equipment as well as a large box containing “about 100 hard drives,” according to the documents.

Security officials on site wanted to examine the hard drives, but their hands were tied. The Assange associates who removed the boxes were on the special list of people who couldn’t be searched. The security team sent a memo back to Quito raising red flags about this late-night maneuver and said it heightened their suspicions about Assange’s intentions.

Again, none of that proves a knowing tie with Russian intelligence. But it does show an interesting rhythm during that year. 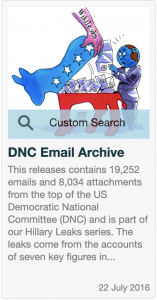 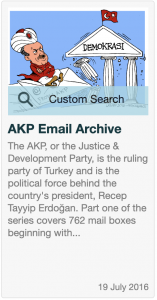 But this schedule doesn’t consider the other things going on with WikiLeaks in 2016. At almost the same time that WikiLeaks released the DNC emails, after all, they also released the AKP email archive.

More interesting still, according to the government’s current allegations about Joshua Schulte’s actions in leaking the CIA’s hacking tools to WikiLeaks, he made a copy of the CIA’s backup server on April 20, then transmitted the files from it to … someone (I suspect these may not have gone directly to WikiLeaks) … in late April to early May.

But then for some reason, on August 4, Schulte for the first time ever started conducting Google searches on WikiLeaks, without visiting the WikiLeaks site until the first release of the Vault 7 leaks.

Meanwhile, WikiLeaks claimed in August 2016  — and ShadowBrokers invoked that claim, in January 2017 — that WikiLeaks had obtained a copy of the original ShadowBrokers files released on August 13, 2016. A Twitter account claiming to be ShadowBrokers reiterated this claim late last year.

Consider the continued presence of highly skilled hackers at the Embassy and the removal of tons of computer equipment as Ecuador cracked down from the viewpoint of what happened to all of NSA and CIA’s hacking tools, rather than what happened with John Podesta’s risotto recipe. Add in the fact that the government seems to think Schulte altered the air gap tool he allegedly wrote for CIA outside of CIA.

To the extent they provide these dates (again, they do so with specificity only for Müller-Maguhn, and only before the election; not to mention, his emails appear to fit a fairly regular twice-monthly pattern), a few of them are quite intriguing. But there was a whole lot else going on with WikiLeaks that year that might be even more important for describing the true nature of WikiLeaks.