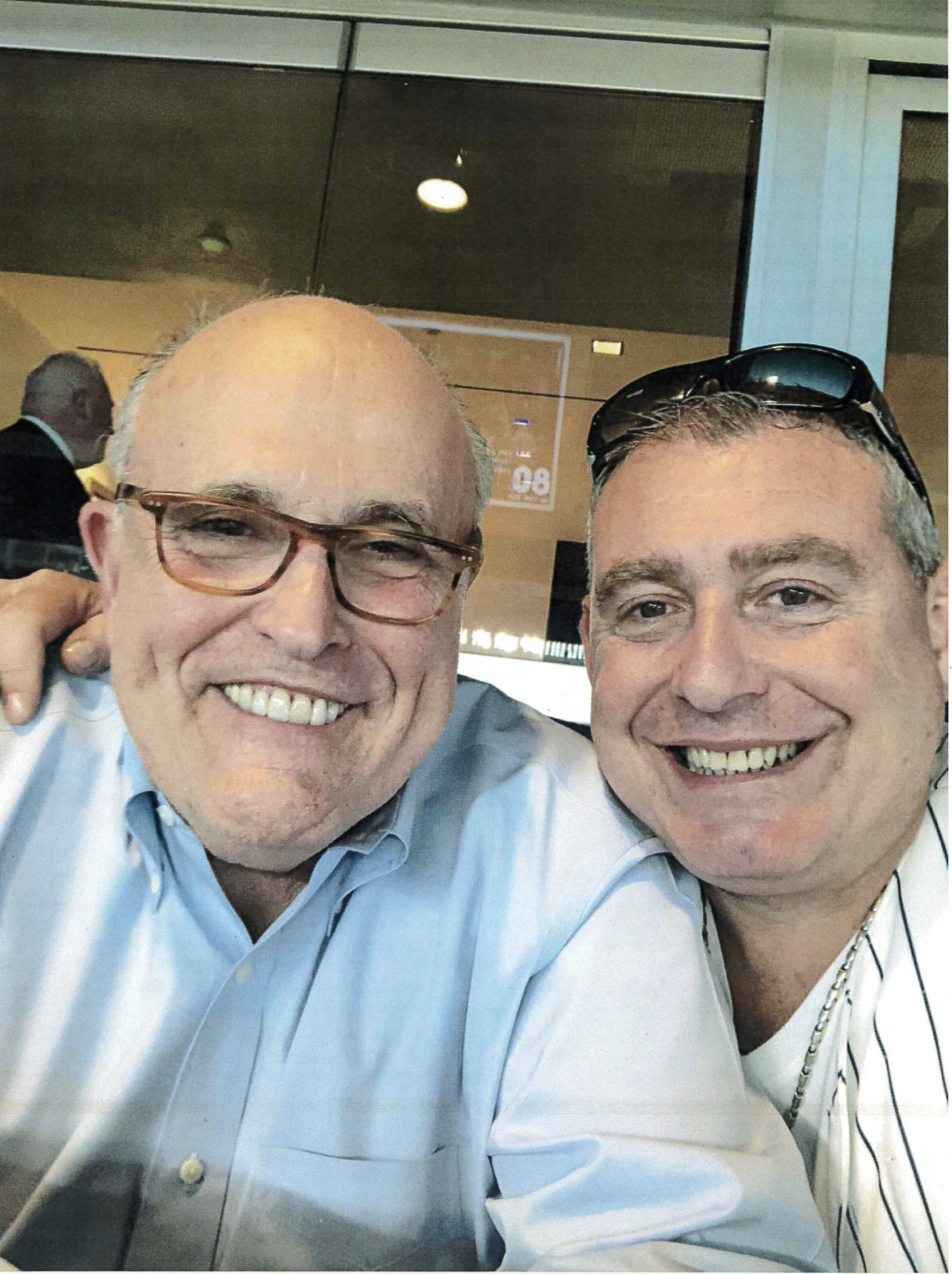 When we discuss Trump’s abuse of pardon authority, we generally talk about how he has used it to persuade close associates to refuse to cooperate or affirmatively obstruct investigations into him. If you believe Michael Cohen, Jay Sekulow floated group pardons early in the Mueller investigation before he realized it would backfire, but he did suggest Trump would take care of Cohen in summer 2017; Rudy Giuliani reportedly repeated those assurances after Cohen got raided in April 2018. Trump has repeatedly assailed the prosecutions of Paul Manafort and Roger Stone and suggested they might be rewarded with pardons for their loyalty. Trump has even suggested Mike Flynn might receive a pardon, which is good because his current attorney seems intent on blowing up his plea deal.

Even within the Mueller Report, however, there was a hint of a different kind of abuse of pardons. Trump was asked if he had discussed a pardon for Assange prior to inauguration day.

Did you have any discussions prior to January 20, 2017, regarding a potential pardon or other action to benefit Julian Assange? If yes, describe who you had the discussion(s) with, when, and the content of the discussion(s).

I do not recall having had any discussion during the campaign regarding a pardon or action to benefit Julian Assange.

Trump gave a typically non-responsive answer, claiming to not recall any such discussions rather than denying them outright, and limiting his answer to the campaign period, and not the transition period.

By the time Mueller asked the question, there was already abundant public evidence of a year-long effort on behalf of Trump’s flunkies to get Assange a pardon in exchange for mainstreaming his alternative version of how he obtained the emails he published in 2016. In the Stone trial, Randy Credico described how Stone reached out to Margaret Kunstler to initiate such discussions; that happened in late 2016.

At the very least, that suggests Trump’s flunkies were trying to reward Julian Assange for providing them dirt during the election. Sure, we don’t know whether those flunkies ran such proposals by Trump; we certainly don’t have the details about how Trump responded. But someone in Trump’s immediate orbit, Stone, moved to reward Assange’s actions by trying to get him immunized from any legal problems he had with the United States. 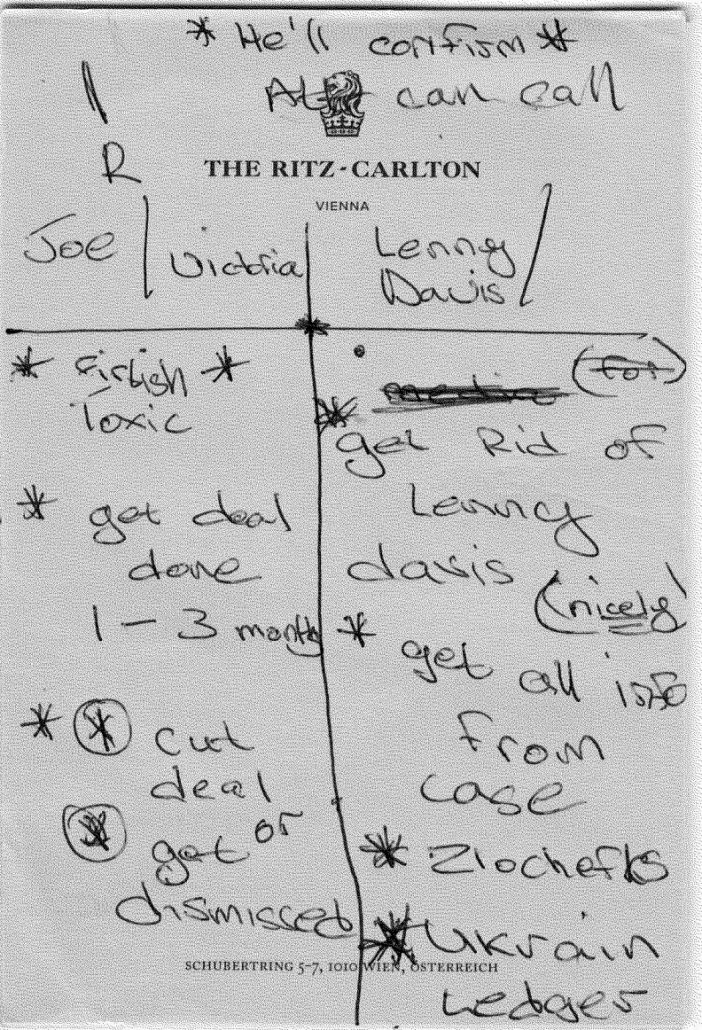 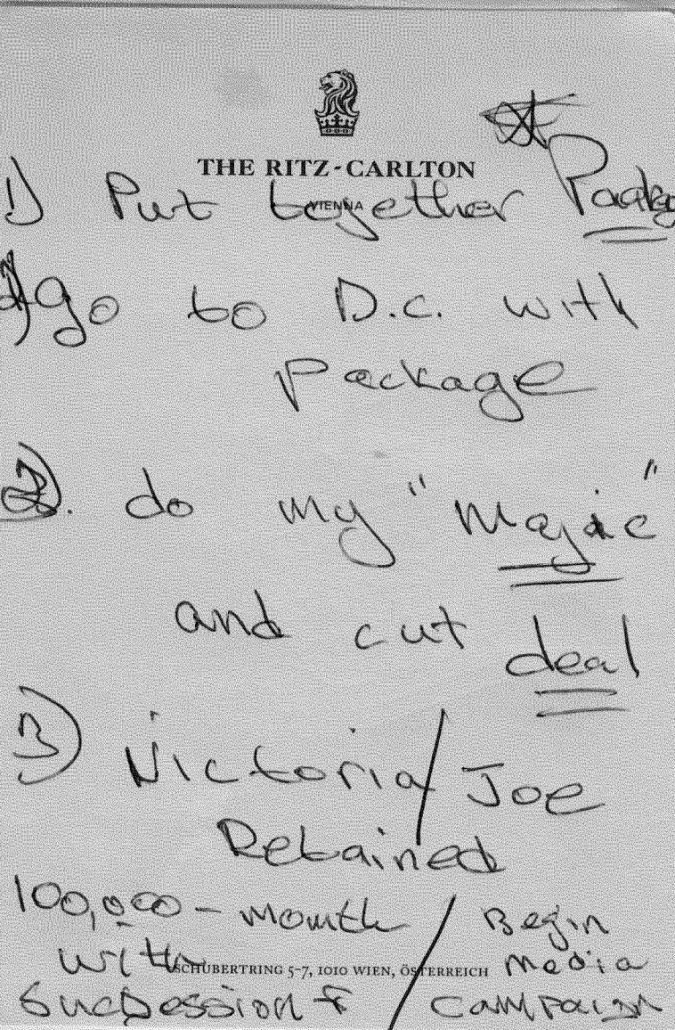 With that in mind, consider these documents that Lev Parnas provided to HPSCI. Part of a set of notes that Parnas took last June while on a call from Rudy, it lays out what plan Parnas was supposed to present to Dmitro Firtash.

The idea was that Parnas would find a way to get rid of Lanny Davis as Firtash’s US lawyer on extradition, to be replaced by Joe DiGenova and Victoria Toensing. Meanwhile, Rudy would be in “DC” with a “package” that would allow him to work his “magic” to cut a “deal.” The package, it seems would involve relief from Firtash’s legal woes — an indictment for bribery in Chicago — plus some PR to make it possible for Firtash (whom just three months earlier Rudy was loudly accusing of having ties to the Russian mob) to do business in the US again. In exchange for totally perverting the US justice system so that a corrupt businessman could access the US market again, Rudy would get … bogus dirt about Joe Biden and a claim that somehow Ukraine’s publication of details on Paul Manafort’s corruption that Manafort knew about two months in advance improperly affected the 2016 election. Possibly, given other things Parnas said, it would also include a claim that Andrew Weissmann was asking Firtash for information on Manafort.

Remember: another of the oligarchs whom Manafort had crossed in the past, Oleg Deripaska, spent most of 2016 trying to feed up information to the FBI to get him indicted, even while tightening the screws on Manafort to get information about the Trump campaign. But Rudy Giuliani wants to suggest that asking Manafort’s former business partners for details of their work would be proof that Democrats cheated in 2016.

Regardless, these notes, if authentic, show that Rudy Giuliani believed he could make Firtash’s legal problems go away.

And all he would ask in exchange — besides a million dollars for his friends and another $200,000  for Parnas, chump change for Firtash — would be transparently shoddy propaganda to use to discredit the prosecution of Paul Manafort and hurt the reputation of Joe Biden.

Dirt for legal relief. A quid pro quo of a different sort.

Once again, there’s not yet any evidence that Trump’s flunkie — his ostensible defense attorney this time, not his rat-fucker — had looped Trump into this plot. Here, the legal relief would come via connections with Bill Barr (possibly with a nudge from the President), not Trump’s executive authority alone.

But in both cases, Trump’s closest associates appear to believe that the proper currency with which to obtain shoddy campaign dirt is legal relief.

As I disclosed in 2018, I provided information to the FBI on issues related to the Mueller investigation.