Last night, Chuck Ross all but admitted he doesn’t know what he’s talking about with respect to to the Roger Stone case.

I tweeted several things in response to this Ross coverage of the exposure of Igor Danchenko as Christopher Steele’s primary subsource. Ross got sloppy with a lot of details in his story, including everything in this paragraph:

The special counsel’s report debunked the claim about Cohen, saying that he did not visit Prague. It also said that no Trump associates conspired with Russia or helped release emails through WikiLeaks.

My tweet thread started by noting that Mueller did not say no Trump associates conspired with Russia. It specifically said that when the report said the investigation did not establish something — presumably including any such conspiracy — that didn’t mean there wasn’t any evidence. Indeed, there was evidence they may have, but the investigation was thwarted by the obstruction of Trump, Paul Manafort, Erik Prince, and others, including Roger Stone.

I then noted that both of Ross’ claims about the WikiLeaks finding were overstated (note, Ross also falsely claimed the report said Cohen didn’t go to Prague; Mueller’s congressional testimony did).

As noted, the report states clearly that the investigation was never able to determine whether Stone — who had a slew of suspicious calls in the lead-up to the Podesta email release — had a role in their timely release.

The investigation was unable to resolve whether Stone played a role in WikiLeaks’s release of the stolen Podesta emails on October 7, 2016, the same day a video from years earlier was published of Trump using graphic language about women.

It does not appear that Stone is currently aware of the full nature and scope of the ongoing FBI investigation.

The thing that appears to have really set Ross off, however, was my observation that he got Stone subpoenaed by credulously reporting his lies. 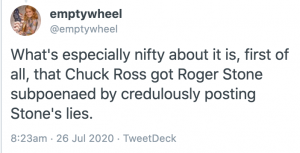 To add to the fun, Ross claimed (after admitting he didn’t know what I was talking about) that he barely wrote about Stone until after he was subpoenaed.

Stone was never subpoenaed by the House Intelligence Committee (that was one reason the government was able to show he obstructed that investigation; by claiming he had no communications to subpoena, he made it more likely he wouldn’t be subpoenaed). He was subpoenaed by the Mueller team.

It’s not clear precisely what date Stone was subpoenaed, but he complied in November 2018. A warrant explaining the subpoena reveals that the government learned Stone had texts involving Randy Credico from media accounts. Later in the affidavit, it specifically cites this story from Chuck Ross. The government used Ross’ attribution to Stone as his source to justify searching Stone’s houses for the old phone.

“Julian Assange has kryptonite on Hillary,” Randy Credico wrote to Stone on Aug. 27, 2016, according to text messages that Stone provided to The Daily Caller News Foundation.

Pointing to the text messages, Stone asserts that Credico “lied to the grand jury” if he indeed denied being Stone’s contact to Assange.

“These messages prove that Credico was the source who told me about the significance of the material that Assange announced he had on Hillary. It proves that Randy’s source was a woman lawyer,” Stone told TheDCNF.

Stone, who is the men’s fashion editor for The Daily Caller, had struggled for months to provide evidence to back up his claims about Credico. The former friends had engaged in a he said-he said battle through various media outlets for months.

But Stone finally obtained the text messages, which he says is smoking gun evidence supporting his claims, after his lawyers were able to extract the communications from a cell phone he stopped using in 2016.

It is unclear whether Mueller’s team has also obtained the messages.

It turns out Mueller had obtained some of these texts from Stone’s iCloud and from Randy Credico. But there were a set that Credico no longer had, and so Ross’ credulous reporting of an obviously cherry picked set of texts provided some of the key justification for the subpoena and warrant. An initial version of the government’s exhibit list appears to source a series of texts between Credico and Stone from August and September 2016 to Stone’s return. Those texts included some showing the circumstances of Credico’s August 2016 interview with Julian Assange, which were part of the proof that Credico couldn’t have been the guy Stone was claiming as his go-between in early August 2016.

I’ve noted repeatedly that, by sharing his comms with Credico and Corsi in an attempt to rebut public claims, Stone proved two of the charges against him, that he lied when he claimed he had no such communications (and, indeed, provided proof that he knew of those texts). All that said, given that Trump commuted his sentence and that Ross and other frothers continue to lie about what Mueller found, telling lies to journalists that ended up getting him subpoenaed probably was a good trade-off for Stone.

Unless, of course, there was something more interesting on that phone that Ross’ credulous reporting helped prosecutors get a warrant for.

MMT on International Trade HJC Should Ask Bill Barr Why It Would Do Irreparable Harm if He Had to Explain...