675 Days after Mike Flynn Blew Up His Probation Plea Deal, We Learn There Never Was an “Original 302”

It has been 675 days since Mike Flynn was originally scheduled to be sentenced on December 18, 2018.

In the interim period, he fired his competent attorneys, Covington & Burling, hired firebreathing TV lawyer Sidney Powell, and had her write a letter to Billy Barr and Jeffrey Rosen demanding they appoint an outside lawyer to review the case. Among other things, the letter demanded “the original draft” of the Flynn 302.

The original draft of the Flynn 302 and all subsequent drafts, including the A-1 file that shows everyone who had possession of it. It appears that SCO has never produced the original 302. There were multiple drafts. It stayed in “deliberative/draft” stage for an inordinate time. Who influenced it, how, and why?

Then, in what was crafted to be an effort to insinuate that DOJ had not complied with Judge Emmet Sullivan’s standing Brady order, she asked for the 302 again, on reply even claiming that the claims in the 302 weren’t backed by the notes that Peter Strzok and Joe Pientka wrote during the interview.

Last December, Sullivan wrote an unbelievably meticulous opinion laying out why all the things she was demanding weren’t actually Brady material. In it, Judge Sullivan rejected Flynn’s “speculat[ion]” that an original 302 showing the agents believed Flynn was telling the truth could exist, not least because their notes mapped all versions of the draft and final 302s.

Mr. Flynn speculates that the government is suppressing the “original 302” of the January 24, 2017 interview, Def.’s Reply, ECF No. 133 at 28; he claims that the lead prosecutor “made it sound like there was only one 302,” id. at 29; and he makes a separate request for the FBI to search for the “original 302” in one of the FBI’s databases, id. at 28-30. In Mr. Flynn’s view, the “original 302”—if it exists—may reveal that the interviewing FBI agents wrote in the report “their impressions that [Mr.] Flynn was being truthful.” Id. at 28. Mr. Flynn claims that the FBI destroyed the “original 302” to the extent that it was stored in the FBI’s files. Id. at 30. Comparing draft FD-302s of Mr. Flynn’s January 24, 2017 interview to the final version, Mr. Flynn claims that the FBI manipulated the FD-302 because “substantive changes” were made after reports that Mr. Flynn discussed sanctions with the Russian Ambassador “contrary to what Vice President Pence had said on television previously.” Id. at 14-15. Mr. Flynn points to the Strzok-Page text messages the night of February 10, 2017 and Ms. Page’s edits to certain portions of the draft FD-302 that were “material.” Def.’s SurSurreply, ECF No. 135 at 8-9.

To the extent Mr. Flynn has not already been provided with the requested information and to the extent the information exists, the Court is not persuaded that Mr. Flynn’s arguments demonstrate that he is entitled to the requested information. For starters, the Court agrees with the government that there were no material changes in the interview reports, and that those reports track the interviewing FBI agents’ notes. See, e.g., Gov’t’s Surreply, ECF No. 132 at 4; Def.’s Reply, ECF No. 133 at 20. Mr. Flynn ignores that FBI agents rely on their notes and memory to draft the interview reports after the completion of an interview. See United States v. DeLeon, 323 F. Supp. 3d 1285, 1290 n.4 (D.N.M. 2018) (discussing the drafting process for FD-302s). While handwritten notes may contain verbatim statements, the notes of FBI agents are not verbatim transcripts of the interview. United States v. Forbes, No. CRIM.302CR264AHN, 2007 WL 141952, at *3 (D. Conn. Jan. 17, 2007). And persuasive authority holds that the government’s production of summaries of notes and other documents does not constitute a Brady violation. See, e.g., United States v. Grunewald, 987 F.2d 531, 535 (8th Cir. 1993) (finding no Jencks Act or Brady violations where the government produced summaries of handwritten notes instead of the actual notes); United States v. Van Brandy, 726 F.2d 548, 551 (9th Cir. 1984) (holding that the government fulfilled its Brady obligations by producing summaries of the FBI’s file because Brady “does not extend to an unfettered access to the files”).

Then, as matters moved towards sentencing and DOJ responded to Flynn’s refusal to cooperate and his conflicting sworn statements, by asking for prison time, Powell got desperate. She filed a bunch of motions to try to get Flynn out of his guilty pleas. And, magically, Billy Barr appointed St. Louis US Attorney Jeffrey Jensen to do what Powell had demanded seven months earlier, to review the case. That “review” used documents already reviewed by Mueller’s team, DOJ IG, John Durham, and — many of them — even Judge Sullivan — to claim DOJ had discovered “new” documents that justified blowing up Flynn’s prosecution.

Before long, Jensen started submitting documents and claims that made it clear his team was either lying or had zero understanding of the documents they used to claim DOJ should withdraw from Flynn’s prosecution. Nevertheless, Jensen kept churning out documents, even — ultimately — releasing an insta-302 showing that a key pro-Trump FBI agent on the case claimed not to understand this was a counterintelligence investigation, professed ignorance of key pieces of evidence, but nevertheless held sway in the Mueller team’s conclusion that they did not have proof that Trump ordered Flynn to blow up sanctions on Russia. They altered evidence in such a way that would support their prior false claims about key dates, and that altered evidence made its way, almost instantaneously and probably via Jenna Ellis, the Trump campaign lawyer with whom Sidney Powell remained in regular touch, into a Trump campaign attack. Ultimately, they admitted to some — but not all — of the evidence that had been altered and asked for a mulligan (but didn’t explain who had altered one of those exhibits).

Along the way, Jensen submitted evidence that made it clear that — not only didn’t Peter Strzok have it in for Mike Flynn — but he pushed the pro-Trump FBI Agent whose view held sway to join the Mueller team. As Sullivan’s amicus has noted, DOJ’s current argument relies on Strzok’s reliability, even while claiming that Strzok cannot be considered a reliable witness.

Jensen also provided evidence that made it clear why Flynn’s lies were material — which was ostensibly the reason DOJ blew up his prosecution in the first place. His lies served to hide that Flynn coordinated with Mar-a-Lago on his efforts to blow up sanctions, something that even Billy Barr’s DOJ conceded might be evidence of coordination with Russia.

And then, on Tuesday, perhaps realizing that now that Strzok and Andrew McCabe have gotten discovery in their lawsuits for wrongful termination, DOJ should stop releasing documents that show Trump’s claims about the two of them were false, but also DOJ’s alterations of Strzok and McCabe documents, Jensen stopped.

According to a notice of discovery correspondence released last night, via letter to Sidney Powell sent on Tuesday DOJ told her there are no documents left and, in fact, there never was an “original 302.”

We write to respond to your recent discovery requests. On October 20, 2020, you requested “immediate production of any additional information that has been uncovered by Durham or the FBI or any federal officer or agent and provided to US Attorney Jensen–and not previously provided to the defense.” As we have previously disclosed, beginning in January 2020, the United States Attorney for the Eastern District of Missouri has been conducting a review of the Michael T. Flynn investigation. Beginning in April 2020, and continuing through October 2020, we have disclosed on a number of occasions documents identified during that review. We are aware of no other documents or information at this time that meet the standard for disclosure in the Court’s Standing Order (Doc. 20).

You also requested “the original 302 and later drafts . . . , or the data evidencing their destruction.” The Federal Bureau of Investigation has a well-documented record management program and retention plan that provides specific instructions for the collection of information, the maintenance of documents, and the retention or disposal of documents. Those guidelines state that “[w]orking files, such as preliminary drafts, notes, and other similar materials, are to be destroyed when the final documents have been approved by the FBI official with authority to do so.” The policy applies to “all drafts created in any medium.” See Records Management Policy Guide, at p. 31, available at https://vault.fbi.gov/records-management-policy-guide-0769pg-part-01-of01/Records%20Management%20Policy%20Guide%200769PG%20Part%2001%20of%2001/vie w#document/p4.

Here, the FD-302 of your client’s January 24, 2017, interview was created in SENTINEL, which is the FBI’s electronic records management system for all criminal and intelligence gathering activities:

SENTINEL provides FBI employees the ability to create case documents and submit them through an electronic workflow process. Supervisors, reviewers, and others involved in the approval process can review, comment, and approve the insertion of documents into the appropriate FBI electronic case files. Upon approval, the SENTINEL system serializes and uploads the documents into the SENTINEL repositories, where the document becomes part of the official FBI case file. SENTINEL maintains an auditable record of all transactions

See Privacy Impact Assessment for the SENTINEL System, May 28, 2014, at p. 1, available at https://www.fbi.gov/services/information-management/foipa/privacy-impactassessments/sentinel.

Finally, you requested “all the comms retrieved of McCabe with Comey, Page, Strzok, Baker, Priestap or anyone else about Flynn, Crossfire Razor or any other name for General Flynn or Michael G. Flynn, and any comms of Comey or any FBI member with anyone in the Obama White House about Flynn.” As discussed above, we have reviewed those communications and have disclosed all such communications that we have identified that meet the standard for disclosure in the Court’s Standing Order (Doc. 20). [my emphasis]

This doesn’t mean Barr is done with his shenanigans. After all, in spite of past assertions that no one at DOJ engaged in any abuse in its discovery compliance, this letter suggests (falsely, per Sullivan’s December 2019 opinion and all precedent) that the documents they’ve been dribbling out did meet “the standard for disclosure in the Court’s Standing Order.” Couple that with the fact that DOJ seems to be hiring for a Brandon Van Grack adjacent job, and I wouldn’t be surprised if they’re going after him, even while hiding evidence showing that Bill Barnett liked and trusted Van Grack.

Plus, ultimately Trump will pardon Flynn (indeed, Powell already told Sullivan that she had discussed a pardon with Trump).

But it does mean that, 675 days after Flynn could have started serving a probation sentence, we finally learn that one key premise on which he blew up this prosecution was false. There is no original 302.

In the wake of learning that her witch hunt came up short yesterday, Sidney Powell was complaining about the delay that she herself caused. 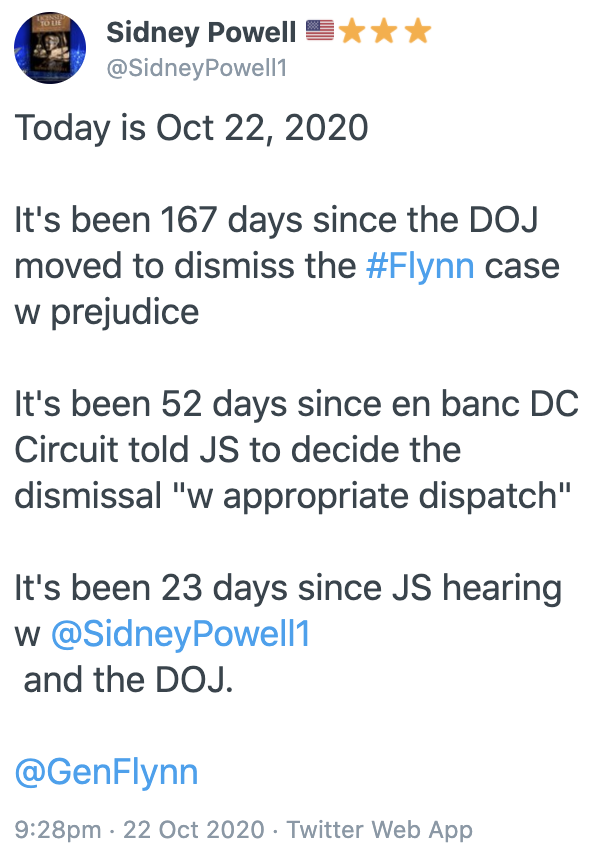