Vicky and Rudy: The Subjects of Delay 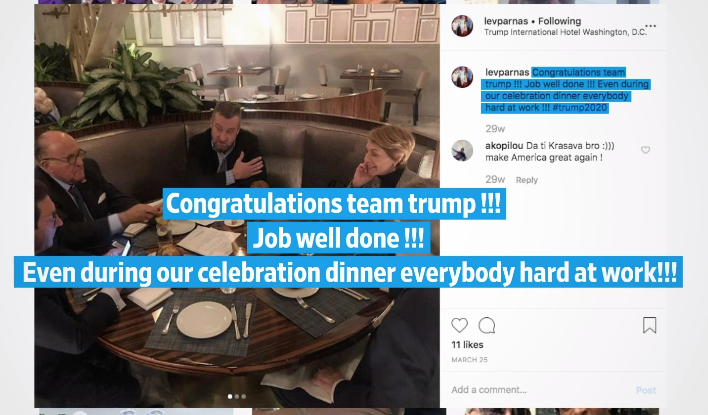 When I asked around last year what the net effect of Billy Barr and Jeffrey Rosen’s efforts to protect Rudy Giuliani would be, I learned that the net effect of refusing to approve searches on Rudy would only delay, but it would not change the outcome of, the investigation into the President’s lawyer.

That’s worth keeping in mind as you read SDNY’s response to Victoria Toensing and Rudy’s demand that they get to treat both the April warrants against them, as well as the 2019 warrants, like subpoenas. Effectively, SDNY seems to be saying, “let’s just get to the indictment and discovery phase, and then you can start challenging these searches.”

If Giuliani is charged with a crime, he will, like any other criminal defendant, be entitled to production of the search warrant affidavits in discovery, at which time he will be free to litigate any motions related to the warrants as governed by Federal Rule of Criminal Procedure 12. Conversely, if the Government’s grand jury investigation concludes without criminal charges, then the sealing calculus may be different, and Giuliani may renew his motion.

If there is a criminal proceeding, the Government will produce the affidavits, warrants, and materials seized pursuant to those warrants, and at that time, the warrants’ legality can be litigated.

Finally, Toensing will have both a forum and an opportunity to litigate any privilege issues if there is a criminal proceeding. As the Second Circuit has noted, in affirming the denial of a return-of-property motion, “If [the grand jury’s] inquiry results in indictment, the lawfulness of the seizure will be fully considered upon a motion to suppress, and any ruling adverse to the defendant will be reviewable upon appeal from a final judgment; if the grand jury declines to indict the movant, or adjourns without indicting it, its property will most likely be returned, and if not, it can initiate an independent proceeding for its return.” [my emphasis]

But the filing repeatedly makes clear that not just Rudy, but also Toensing (whose lawyer made much of being informed that Toensing was not a target of the investigation), are subjects of this investigation.

But the Government specifically chose not to proceed by subpoena in this case, for good reason, and there is no precedent for permitting the subjects of an investigation to override the Government’s choice in this regard.

None of the cases cited by Giuliani or Toensing supports their proposed approach. Toensing principally relies on United States v. Stewart, No. 02 Cr. 395 (JGK), 2002 WL 1300059, at *4-8 (S.D.N.Y. June 11, 2002), 4 but that case is readily distinguishable because it involved the seizure of documents from several criminal defense attorneys who were not subjects of the Government’s investigation and had many cases before the same prosecuting office

Such concerns merely serve to highlight the many countervailing problems with Giuliani and Toensing’s proposal: under their approach, the subjects of a criminal investigation would have the authority to make unilateral determinations not only of what is privileged, but also of what is responsive to a warrant.

Nevertheless, Giuliani argues that, quite unlike other subjects of criminal investigations, he is entitled to review the affidavits supporting the warrants, which would effectively give him the extraordinary benefit of knowing the Government’s evidence before even being charged with a crime.

Her request is contrary to law and would effectively deprive the Government of its right to evidence in the midst of a grand jury investigation so that she, the subject of that investigation, may decide what is privileged and what is responsive in those materials.

In other words, accepting Giuliani and Toensing’s argument about the impropriety of using a filter team to review covert search warrant returns would entitle subjects of a criminal investigation to notice of that investigation any time a warrant were executed that related to them, no matter if the investigation were otherwise covert and no matter if the approving Court had signed a non-disclosure order consistent with the law. [my emphasis]

SDNY correctly treats Rudy and Toensing’s demands to review this material before SDNY can obtain it as a delay tactic.

Giuliani and Toensing’s proposal to allow their own counsel to conduct the initial review of materials seized pursuant to lawfully executed search warrants, including making determinations of what materials are responsive to the warrants, on their own timeline is without any precedent or legal basis. The Government is aware of no precedent for such a practice, which has the effect of converting judicially authorized search warrants into subpoenas.

Indeed, their discussion of the Lynn Stewart precedent emphasizes their goal of obtaining this material expeditiously.

None of the cases cited by Giuliani or Toensing supports their proposed approach. Toensing principally relies on United States v. Stewart, No. 02 Cr. 395 (JGK), 2002 WL 1300059, at *4-8 (S.D.N.Y. June 11, 2002), 4 but that case is readily distinguishable because it involved the seizure of documents from several criminal defense attorneys who were not subjects of the Government’s investigation and had many cases before the same prosecuting office. (See infra at pp. 33-34). In any event, the Court appointed a special master in Stewart, as the Government seeks here. And the procedures adopted in Stewart illustrate why the Government’s proposed approach is preferable. In Stewart, the presiding judge initially believed that the special master’s review could be conducted expeditiously because the defendant’s counsel could quickly produce a privilege log (as Toensing seeks to do here). Id. at *8. But 15 months later, the judge lamented that the special master still had not produced a report on the seized materials. United States v. Sattar, No. 02 Cr. 395 (JGK), 2003 WL 22137012, at *22 (S.D.N.Y. Sept. 15, 2003), aff’d sub nom. United States v. Stewart, 590 F.3d 93 (2d Cir. 2009). That cumbersome process stands in stark contrast to that adopted by Judge Wood in Cohen, wherein the special master completed her review on an expedited basis in parallel to Cohen’s counsel, and set deadlines for Cohen’s counsel to object to any of her designations. (Cohen, Dkt. 39 at 1-2). In Cohen, the special master was appointed in April 2018, and her review was complete by August 2018. The Cohen search involved approximately the same number of electronic devices seized here, but also included significant quantities of hard copy documents, which are not at issue here. In sum, the Court should follow the model set forth in Cohen, which resulted in an efficient and effective privilege review. [my emphasis]

This Court should not permit Giuliani and Toensing to stall the investigation of their conduct in this manner, particularly where the Government’s proposal will allow them to conduct the same review in parallel with a special master. The Government’s proposal to appoint a special master to review the seized materials is the only proposal that is fair to all parties, respects the unique privilege issues that the 2021 Warrants may implicate, and will ensure that Government’s investigation proceeds without undue delay.6

I’m mindful, as I review the schedule laid out above, that Cohen was charged almost immediately after the Special Master review was completed, in August 2018. In addressing the partial overlap between the 2019 searches and the April ones, the government notes that, “the Government expects that some, but not all, of the materials present on the electronic devices seized pursuant to the Warrants could be duplicative of the materials seized and reviewed pursuant to the prior warrants.”

The government already knows what they’re getting with these warrants (and if they don’t get it, they’re likely to be able to charge obstruction because it has been deleted). They’re calling for a Special Master not because it provides any more fairness than their prior filter review (indeed, they speak repeatedly of the “perception of fairness”), especially since investigators are about to obtain the materials from the 2019 search, but because it ensures they can get this material in timely fashion, especially since, as it stands now, they’re going to have to crack the passwords on seven of the devices seized from Rudy.

The remaining seven devices belonging to Giuliani and his business cannot be fully accessed without a passcode, and as such the Government has advised Giuliani’s counsel that the devices can be returned expeditiously if Giuliani were to provide the passcode; otherwise, the Government does not have a timeline for when those devices may be returned because the FBI will be attempting to access those devices without a passcode, which may take time.

Yes, Rudy and Toensing are trying to get an advance look at how bad the case against them is. But they’re also hoping to delay, possibly long enough to allow a Republican to take over again and pardon away their criminal exposure.

Which suggests that all the hypotheticals about Rudy and Toensing being able to challenge these searches if they are indicted are not all that hypothetical. SDNY is just trying to get to the place where they can indict.