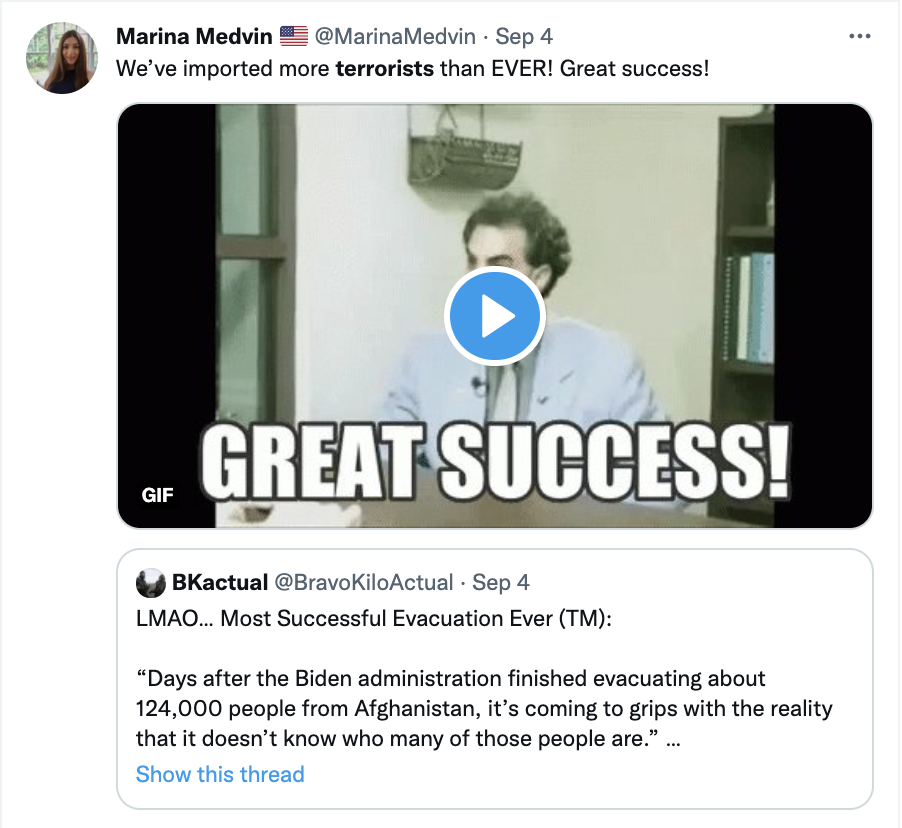 Marina Medvin is the sweet spot of January 6 lawyers. She’s a legit lawyer, doing particularly good work trying to challenge the asymmetrical access defendants get to security video of the attack. She clearly serves the interests of her clients rather than grifting or focusing more on scoring political points, as some other January 6 defense attorneys appear to do. But she’s also a right wing activist in her own right.

As such, she spends a great deal of time calling people she doesn’t like “terrorists.”

She uses debunked claims about (foreign) terrorists to try to sow fear about immigration. 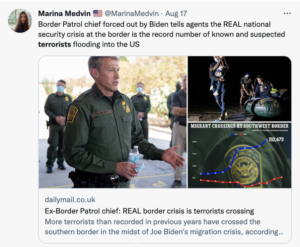 She spends a great deal of time demanding that the 9/11 attackers be called terrorists. 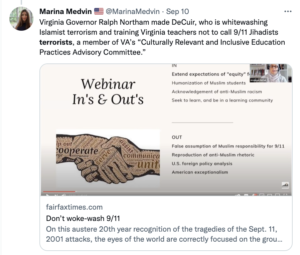 She calls the evacuation of Afghans who helped the US fight terrorism the importation of terrorists. 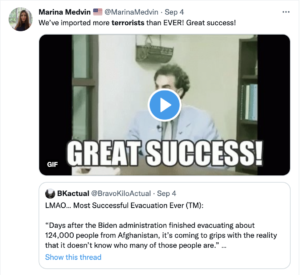 She labels Joe Biden’s effort to craft a positive outcome out of Donald Trump’s capitulation to the Taliban as negotiating with terrorists. 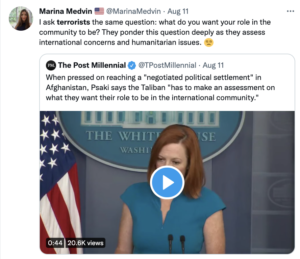 She holds protestors accountable for those they affiliate with who call for violence. 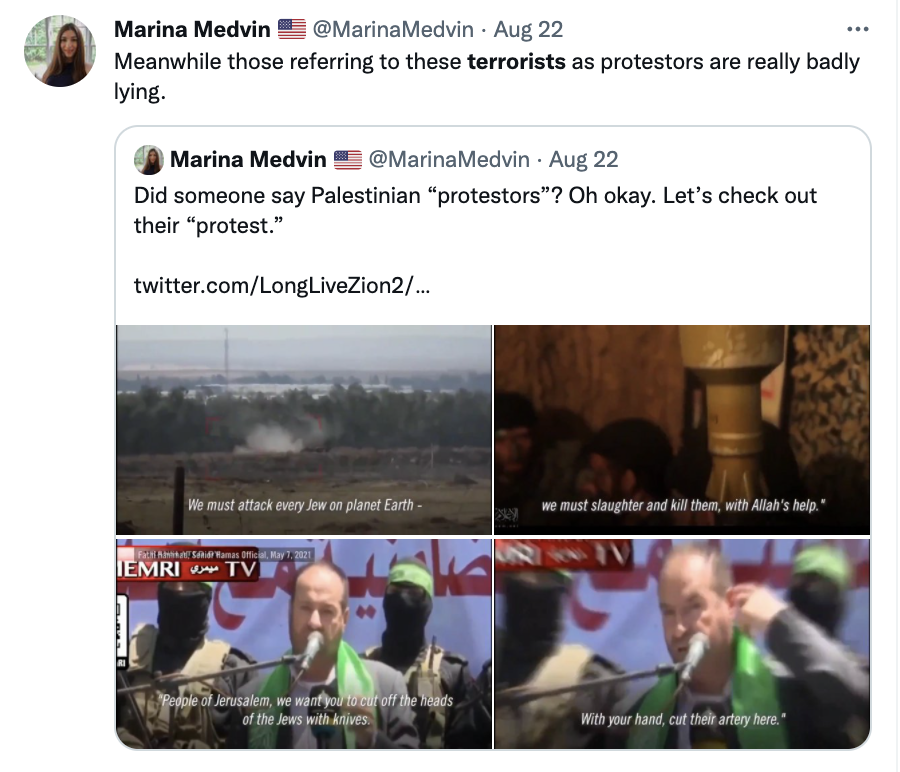 She even complains when those held as — and those guarding — terrorists get treated humanely. 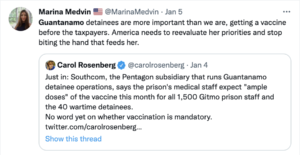 Yesterday, with the benefit of Medvin’s able counsel, her client Jenny Louise Cudd pled guilty under a plea agreement that permits the government to ask for a terrorism enhancement under U.S.S.G. § 3A1.4 at sentencing.

To be sure, I agree with Medvin’s assessment yesterday that it is unlikely the government will actually push for this enhancement with Cudd (and I think it even more unlikely that Judge Trevor McFadden would side with such a government request). This appears to be a standard part of any January 6 plea agreement involving sentencing calculations but no cooperation agreement; one thing cooperators are getting — especially those in militia conspiracy cases — is an assurance they won’t been deemed terrorists at sentencing.

Still, Cudd won’t be sentenced until March, and the government may have a far more complete story to tell about the attempted revolution that Cudd applauded by then, a story that will likely incorporate some of the facts to which Cudd admitted under oath yesterday. You never know what DOJ will do or Judge McFadden might find plausible by then.

I raise the terrorism enhancement language in Cudd’s plea agreement not because I think she’ll be treated as one come sentencing (thus far, I think Scott Fairlamb is at greatest risk of that, because his statement of offense admitted both to using violence and to his intent to intimidate those certifying the vote). Rather, I raise it to show that even a right wing activist like Medvin agrees with my reading of the language in these plea agreements. The government is reserving the right to treat these defendants, even someone who pled down to a trespassing misdemeanor like Cudd, as terrorists at sentencing. To be clear: Medvin doesn’t think this will work legally nor does she think her client is implicated in the violence of those with whom she chose to affiliate on January 6, but that is what she described the language effectively means in Cudd’s plea hearing.

Such terrorism enhancements are how domestic terrorists get labeled as terrorists. Because domestic terrorist groups like the Proud Boys or Oath Keepers aren’t labeled as (foreign) terrorist groups by the State Department, affiliation with or abetment of those groups is not per se illegal (as it might be under material support statutes for foreign terrorist organizations). It’s not until sentencing, then, that the government can argue and a judge might agree that the specific crime a person committed involved acts dangerous to human life, and (in the case of January 6) an attempt to intimidate or coerce the policy of government. If the judge does agree, a terrorist enhancement could expose the defendant to a much longer sentence as a result, a guidelines range of 121 to 151 months for someone with no criminal history.

This is a detail that has gone almost entirely unreported elsewhere: that DOJ is building in an ability to treat these defendants as terrorists when it comes to sentencing, sentencing that may be five months in the future.

Mind you, since this would be domestic terrorism, the government could not just wildly label someone as a terrorist for attending a protest at which others present espouse violence, as Medvin has done of Muslims. They’d have to lay out a specific intent on the part of the defendant to threaten force to coerce some political outcome. But if they do so with these January 6 defendants, then they may be legally branded as terrorists for their actions on January 6.