Finally, Everyone Is Talking about Trump’s Obstruction on January 6 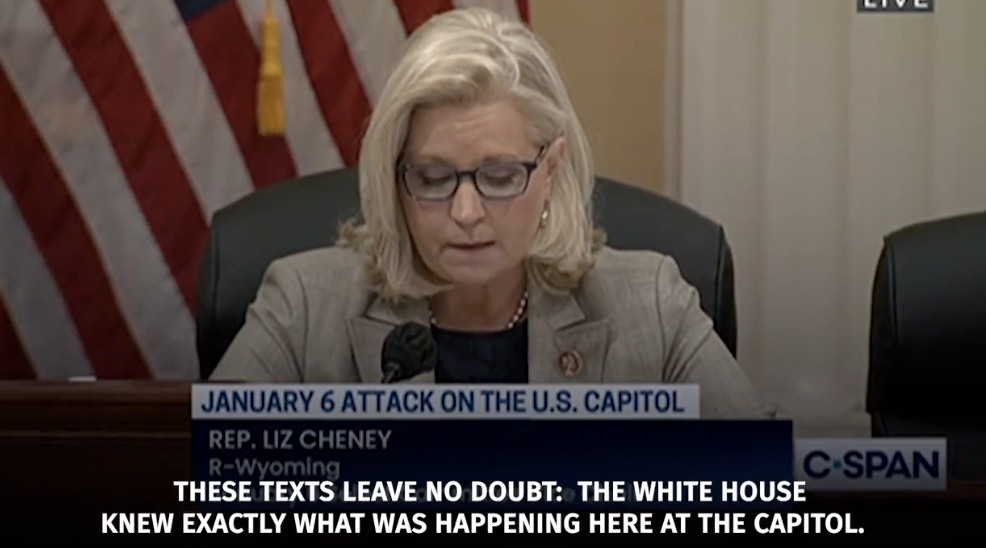 Twice in the last 24 hours, Liz Cheney has read from texts that Mark Meadows already turned over to the January 6 Committee, showing that everyone from Sean Hannity to Don Jr were desperately contacting Meadows begging him to get Trump to do something to halt the assault on the Capitol.

"These texts leave no doubt: the White House knew exactly what was happening at the Capitol. Members of Congress, the press, and others wrote to Mark Meadows as the attack was underway."
-Vice Chair @RepLizCheney pic.twitter.com/HMoQhQ8nSK

After reading the names of all the people who’ve protected Trump since, Cheney then described that Meadows’ testimony is necessary to determine whether Trump, “through action or inaction, corruptly seek to obstruct or impede Congress’ official proceedings to count electoral votes.”

Hours passed without necessary action by the President. These privileged texts are further evidence of President Trump’s supreme dereliction of duty during those 187 minutes. And Mr. Meadows’ testimony will bear on another key question before this Committee: Did Donald Trump, through action or inaction, corruptly seek to obstruct or impede Congress’ official proceedings to count electoral votes?

With her forceful comments Cheney was, as TV lawyers have finally discovered, invoking the clause of the obstruction statute that DOJ has used to charge hundreds of the most serious January 6 rioters. Liz Cheney was stating that Trump’s actions on January 6 may demonstrate that he, along with hundreds of people he incited, had deliberately attempted to prevent the vote count.

Even as she was doing that a second time today, the judge presiding over most of the Proud Boys cases, Tim Kelly joined his colleague Dabney Friedrich in rejecting the challenge that Ethan Nordean had taken to that same application.*

Again, this issue is not over. There are 2 other ripe challenges to the application, and plenty more pending.

But for the moment, it seems that all three branches of government — prosecutors charging obstruction, judges affirming the viability of the application, and senior members of Congress invoking it as part of the January 6 investigation — agree that the events of the day may amount to obstruction.

Back when I begged TV lawyers to start focusing on this application, I laid out the things that Trump had or may have done, that might be proof of obstruction.

The January 6 Committee has already collected evidence demonstrating many of these issues, for example, the efforts to sow the Big Lie, including coordination with Congress, reveling in the collecting mobs, directing Guard deployment in ways that would support the insurrection, the unbelievable pressure on Mike Pence to violate his oath to the Constitution. In the interim four months, the press and Committee have identified other potential means of obstruction, such as ordering Alex Jones to bring his mob to the Capitol.

This is not a guarantee that Trump will be prosecuted. But all three branches of government now agree on the framework with which he might be held accountable.

*As I now understand it, Kelly announced yesterday that he will be denying the motion to dismiss later this week. He has not done so formally yet, but announced it yesterday in conjunction with his denial of renewed bail motions from three defendants.

The Video Authentication Challenge: Aaron Mostofsky The Pied Piper of Insurrection, and Other Challenges in Charging the January...