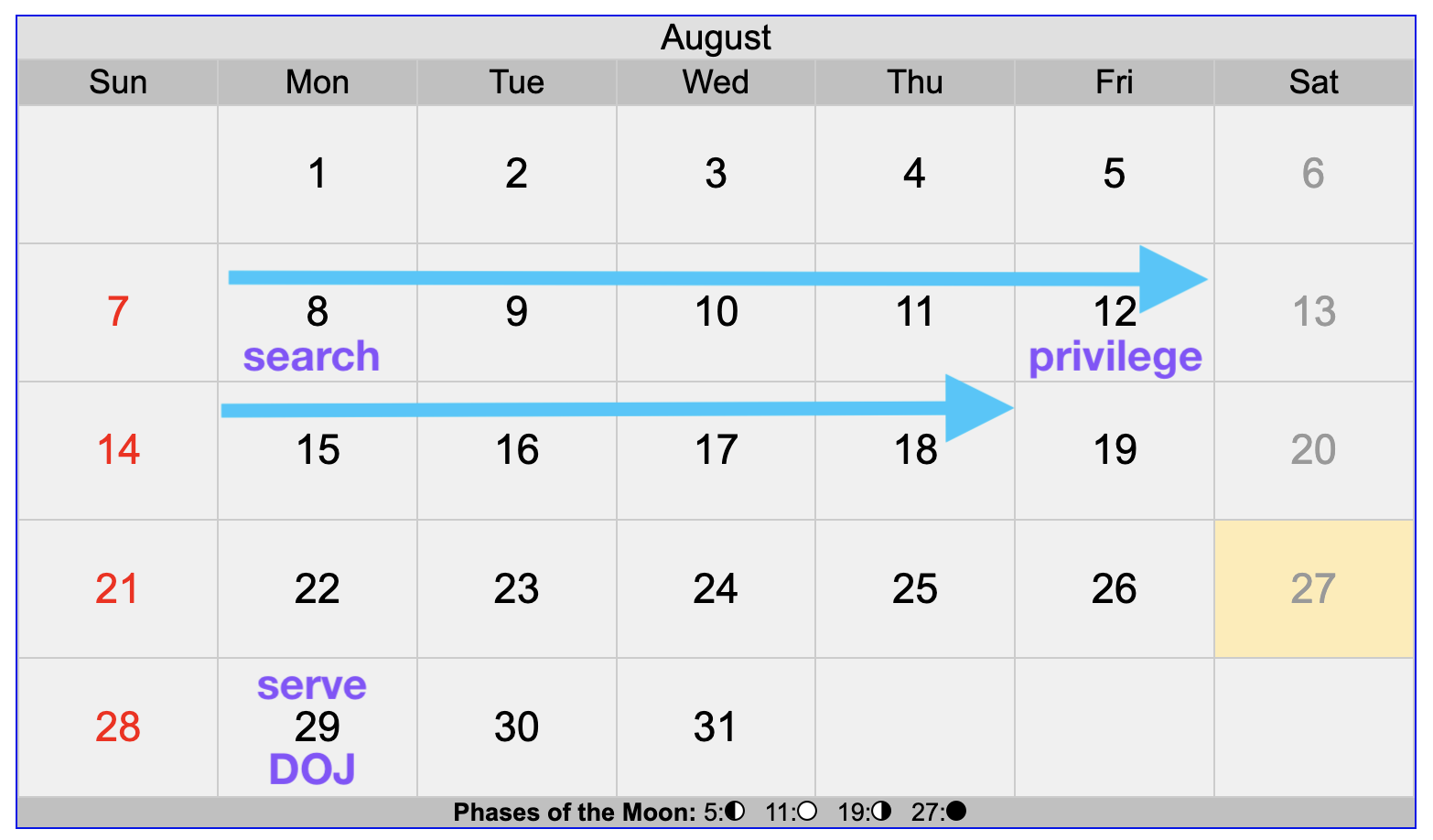 According to the Trump affidavit, between May 16 and May 18, the FBI conducted a preliminary review of the 15 boxes of materials he returned to NARA in January.

We know from the letter from Acting Archivist Debra Steidel Wall that the FBI first got access to those records no earlier than May 12.

I have therefore decided not to honor the former President’s “protective” claim of privilege. See Exec. Order No. 13,489, § 4(a); see also 36 C.F.R. 1270.44(f)(3) (providing that unless the incumbent President “uphold[s]” the claim asserted by the former President, “the Archivist discloses the Presidential record”). For the same reasons, I have concluded that there is no reason to grant your request for a further delay before the FBI and others in the Intelligence Community begin their reviews. Accordingly, NARA will provide the FBI access to the records in question , as requested by the incumbent President, beginning as early as Thursday, May 12, 2022.

That’s how many days it took the FBI to process 15 boxes of material and then find 184 unique pieces of evidence that the former President violated the Espionage Act.

Now consider a detail included in the affidavit. As I’ve pointed out repeatedly, there was a filter team onsite. The affidavit helpfully explains that the primary job of the filter team was to do the search of Trump’s office.

82. The Case Team will be responsible for searching the TARGET PREMISES. However, the Privilege Review Team will search the “45 Office” and conduct a review of the seized materials from the “45 Office” to identify and segregate documents or data containing potentially attorney-client privileged information.

Probably, the case team brought the privilege review team five other boxes to review. That’s because Fox News told us already that all the items on what I call the SSA receipt include privileged materials, but the numbers for five of those boxes suggest they were found in the proximity of all the rest, likely the storage closet. 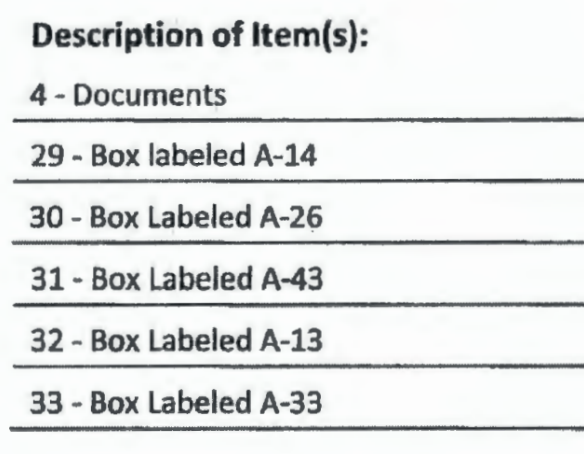 So five boxes (and a stash of documents) were identified to include privileged information. The remainder, a total of 22 boxes (one of which is the leatherbound box with the TS/SCI documents), would presumably be subjected to a similar process as that used in May.

Probably, that initial search was done with a limited team, because the investigation was not overt yet (though Trump obviously knew about it). Now, this time around, FBI was undoubtedly assuming that Trump could run to the court to get a Temporary Restraining Order at any time, so they may have thrown additional bodies at the problem. But let’s assume the process took the same amount of time. There are approximately 50% more boxes on the CLASS receipt than FBI first accessed in May. 50% more days would be nine days. 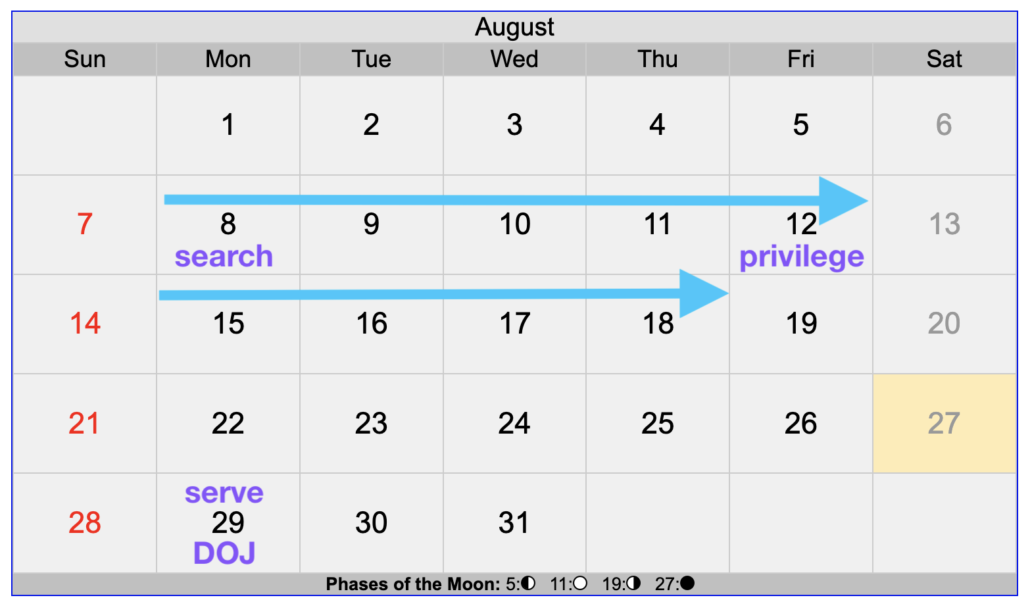 Even assuming that the FBI didn’t throw extra bodies at the problem, even assuming they took weekends off — both completely ridiculous assumptions when you’re trying to beat a notoriously litigious suspect trying to hide stuff — they would have been done with that same preliminary review around August 18. Nine days ago.

They could have gone through the entire process twice in the time elapsed since the search of Mar-a-Lago!!!

That timeline is consistent, in fact, with NYT having gotten a leak that the FBI had found maybe 100 more documents with classified markings, just from the 27 (or maybe just 22 of the) boxes seized on August 8, by August 22.

The initial batch of documents retrieved by the National Archives from former President Donald J. Trump in January included more than 150 marked as classified, a number that ignited intense concern at the Justice Department and helped trigger the criminal investigation that led F.B.I. agents to swoop into Mar-a-Lago this month seeking to recover more, multiple people briefed on the matter said.

In total, the government has recovered more than 300 documents with classified markings from Mr. Trump since he left office, the people said: that first batch of documents returned in January, another set provided by Mr. Trump’s aides to the Justice Department in June and the material seized by the F.B.I. in the search this month.

Every single document with classified markings seized on August 8 is another piece of evidence that the former President took classified documents the Presidential Records Act says must be in the Archives or the agency that generated the documents and refused to give them back. And then refused again. And again. And again. If the DOJ were ever to charge Trump, they might focus on just twenty documents, like they did with Hal Martin.

They’ve got 15 times that to choose from already.

Now let’s go back to the privileged documents — 5 boxes and a pile of other documents, presumably obtained from Trump’s office. For some reason — perhaps because they’re also government records or include classified information — even after identifying them as privileged, FBI still got to seize them.

Five boxes, a third the number as the original batch from Mar-a-Lago. Once you got into those boxes, it might take just two days to do an initial review of them.

Now, we don’t know what DOJ is doing with them (though they did decide to take them). But here’s what, per the affidavit, they were permitted to do:

They can hold off entirely (option b), they can engage in a sort of a Special Master review (option c), or (option a), they can secretly go to the judge and ask him to decide whether they’re privileged. The way this is written suggests that DOJ imagined that Bruce Reinhart might look at documents the privilege team identified as privileged and decide they weren’t privileged, possibly because they were crime-fraud excepted.

Remember that Fox News report relaying Trump’s complaints that the FBI had taken attorney-client privileged documents? That was published on August 13, six days after the search.

To be sure, Judge Reinhart probably can’t sort through boxes of documents at the pace the FBI can (though, what else was he going to do, given that he was hiding out from Trump’s mob?). Still, by the time Trump learned that the SSA receipt reflecting 5 boxes and some other documents from his office had privileged material in them, DOJ had had five days to do their own filter search and go back to Reinhart and ask him to confirm they could access those materials.

Yesterday, five days after their first attempt to submit a whack filing asking for (among other things) a Special Master to review the seized documents — but not for attorney-client privilege, but for Executive Privilege (documents that, by definition, belong at the Archives) — and after some polite prodding from an wildly pro-Trump Judge, Aileen Cannon, they submitted their second attempt.

I’m not going to go through it in depth this time (here’s a typically hilarious thread from Mike Dunford on it). But here are two key details. First, in response to one of the really helpful prods from Judge Cannon, Trump’s lawyers confessed that, no, they hadn’t thought to formally inform DOJ about this lawsuit before she reminded them that’s necessary.

Finally, the Court has directed Movant to address the status of service of process on the Government. Dkt. 10. Movant served the Motion to United States Attorney Juan Antonio Gonzalez and Jay Bratt, Chief of the Counterintelligence and Export Control Section in the DOJ’s National Security Division, on the date of filing, August 22, 2022, via electronic mail. Counsel for Movant spoke with Mr. Bratt on August 25, 2022, and inquired as to the Government’s position on acceptance of service. Mr. Bratt consulted the U.S. Attorney’s Office for the Southern District of Florida (“SDFL”), and informed counsel for Movant that, consistent with DOJ practice, SDFL adheres to the requirements of Rule 4(i) of the Federal Rules of Civil Procedure for service of process in a civil matter against the United States. Accordingly, counsel for Movant sought an executed copy of a Summons, which has been issued by the Clerk. See Dkt. 26. Movant will promptly serve it, and a copy of the pleadings, on the U.S. Attorney’s Office for SDFL and will promptly file proof of service thereafter.

But, two days after she nudged them to do so, Trump’s lawyers decided to call Jay Bratt, and asked him if he’d really like formal notice that they want to sue him to prevent him from doing his job.

So sometime on Monday, maybe — that’ll be 21 days after the FBI seized 27 boxes from Trump’s hotel, more than three times as long as it took for FBI to find 184 unique pieces of evidence that Trump violated the Espionage Act back in May — DOJ will have formal notice that this is going on, which would be the earliest that Judge Cannon could conceivably say, “Stop what you’re doing!!”

But she won’t, because first she’s going to give DOJ a chance to weigh in, even if on accelerated schedule.

With that in mind, here’s the second point. On their second attempt, Trump’s lawyers managed to ask for the thing they needed to do if they really wanted a Special Master: to ask for an injunction.

Movant requests two categories of relief in the present proceeding. First, Movant seeks an order directing the appointment of a Special Master to oversee the review of materials seized from Mar-a-Lago on August 8, 2022 and enjoining the Government from engaging in any further review of those materials.

The present Motion seeks injunctive relief in the form of an order barring the Government from engaging in any further review of materials seized on August 8, 2022.

I’m not sure they’ve made this ask properly. At this point, 18 days after the search, it’s probably not even worth the effort figuring it out. The point, though, is how this will work. 21 days after the search of Trump’s house, 17 days after DOJ told Trump they’re going to pursue some other option to access the stuff already identified as attorney-client privileged (one of which might be asking Reinhart to allow them to access it), and 14 days after Trump started getting stuff — his passports — that was out of scope of the investigation, is the first moment that they will have formally told a judge, “Emergency!!! We need a Special Master!!!”

Update: Two significant developments. First, Judge Cannon has issued an order to the government — which has not yet been served — to respond to Trump’s motion by Tuesday.

On or before August 30, 2022, Defendant shall publicly file a Response to the Motion and Supplement, including Plaintiff’s request for the appointment of a special master.

In addition to the Response, on or before August 30, 2022, Defendant shall file under seal the following materials:

i. A more detailed Receipt for Property specifying all property seized pursuant to the search warrant executed on August 8, 2022.

Meanwhile, Director of National Intelligence Avril Haines has told various Committee Chairs and Ranking Members that the IC is conducting a classification review and what sounds like a preliminary damage assessment. That suggests the stolen documents are already out to the agencies.

Although the government will provide the Court more detail in its forthcoming supplemental filing, the government notes that, before the Court issued its Preliminary Order, and in accordance with the judicially authorized search warrant’s provisions, the Privilege Review Team (as described in paragraphs 81-84 of the search warrant affidavit) identified a limited set of materials that potentially contain attorney-client privileged information, completed its review of those materials, and is in the process of following the procedures set forth in paragraph 84 of the search warrant affidavit to address potential privilege disputes, if any. Additionally, the Department of Justice and the Office of the Director of National Intelligence (“ODNI”) are currently facilitating a classification review of materials recovered pursuant to the search. As the Director of National Intelligence advised Congress, ODNI is also leading an intelligence community assessment of the potential risk to national security that would result from the disclosure of these materials.