Apparently, Elon Musk decided that the best person to disclose what he promised would show, “what really happened with the Hunter Biden story suppression by Twitter” was Matt Taibbi, someone who — by his own admission (an admission on which he has apparently flip-flopped) — apologized for Russia’s invasion of Ukraine because he was, “so fixated on Western misbehavior that I didn’t bother to take [the] possibility [of Russian invasion] seriously enough.”

Taibbi’s own apologies for Russia didn’t just start with the Russian imperialism and war crimes, however.

He was long a critic of what he called “RussiaGate” based on the tried and true tactic of treating the Steele dossier and Alfa Bank allegations — and not the legal verdicts that confirmed Trump’s National Security Advisor, campaign manager, Coffee Boy, personal lawyer, and rat-fucker all lied to hide the true nature of their Russian ties — as the primary substance of the case. Taibbi scolded others about shoddy reporting even while he adhered to the Single Server fallacy that not only assumed all the hacked material came from just one server, but ignored the hack of Amazon Web Services content and abundant other evidence attributing the hacks to Russia from other cloud companies. Then there was the time Taibbi tried to smack down on claims that Maria Butina used sex to entice targets, in which he made error after error, all without allowing his false claims to be disrupted by consulting the actual primary sources.

That’s the guy Elmo decided would be a credible voice to tell us what happened with the “Hunter Biden” “laptop” story.

That matters because, as Andy Stepanian explained last night, Twitter had advance warning of a Russian information operation targeting Hunter Biden during the summer of 2020, months before the release of the “Hunter Biden” “laptop.”

Matt Taibbi is either woefully misinformed about this or cynically lying. How do I know? Because I attended two meetings with Twitter representatives in July and August 2020 wherein the Hunter Biden story was discussed within the larger framework of election integrity.

Matt Taibbi’s analysis has myriad problems but the biggest problem is his failure to underscore what initially prompted twitter staff to designate the content in the Post story as “stolen” or “hacked” material. This came from conversations with law enforcement in summer of 2020.

During the election integrity meetings I was present for little was known about how the material would eventually be published. I recall one spokesperson suggesting the Hunter Biden content may publish via “something like wordpress” or “wikileaks-styled” website.

This is the contact with FBI that Twitter and Facebook had about Hunter Biden in 2020, not any immediate response to the Post story. It’s almost certainly what Mark Zuckerberg was referring to in a Joe Rogan interview that has been misrepresented in the aftermath.

Taibbi, the self-described reverse chauvinist, describes any Hunter Biden-specific warnings as general — mentioning neither Hunter Biden nor Russia — and omits the timing.

Perhaps Elmo didn’t give Taibbi this important earlier context. Perhaps it’s Elmo’s fault that his hand-picked Russian apologist left out the specific details of the warning — that they included Hunter Biden and preceded the NYPost story by months — that are necessary context to the stupid decisions Twitter made. But the silence about those details is anything but “what really happened.”

And note Taibbi’s conclusion: There was no government involvement in the laptop story.

Assuming Taibbi were a credible reporter, that should end it. Game over.

Taibbi has debunked the conspiracy theory the frothy right has been chasing for months.

Curiously, Taibbi concludes there was no government interference in the story even while he showed proof of a government surrogate pressuring Twitter about its (stupid) moderation decisions on the laptop story.

Taibbi was so deep in his conspiracy theories he didn’t realize that that — a surrogate of the sitting President demanding that Twitter give his campaign advance notice of their content moderation decisions — is closer to a First Amendment violation than suppressing the Post story, no matter how stupid Twitter’s decision was. To be clear: it’s not a First Amendment violation, but kudos to Taibbi for getting closer than all the frothy Republicans have to finding proof of inappropriate pressure.

It came from Trump.

In fact, Taibbi admits that Twitter was honoring requests from the White House, as well as the private entity of the Joe Biden campaign, for takedowns using the content moderation tools. 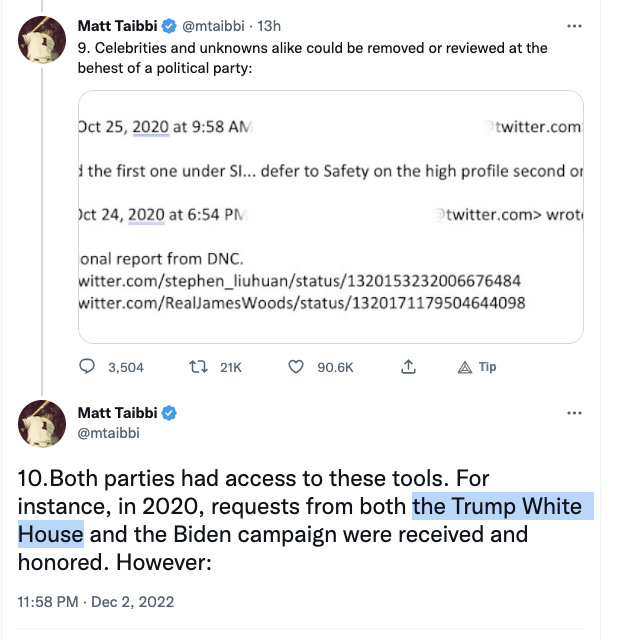 Or rather he excuses it, using the old charade of campaign donations which show what a small portion of Twitter employees spend. 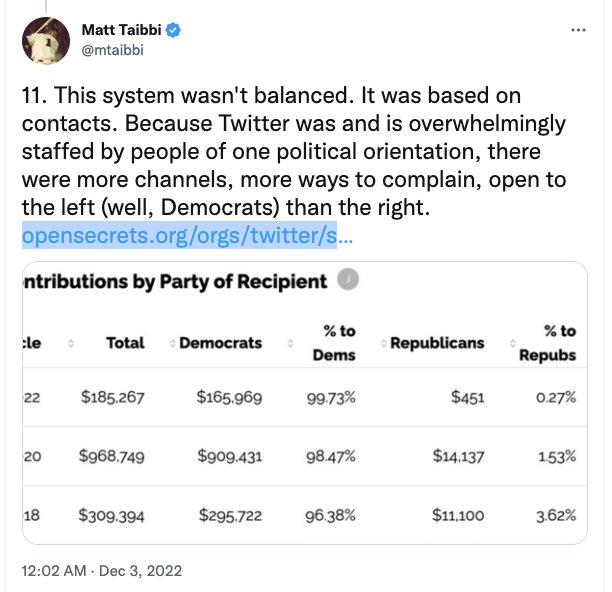 And Taibbi’s other claims of bias are just as problematic. In one Tweet, Tweet 30, Taibbi claims that Ro Khanna was the only Democratic official he could find that expressed concern about the Post takedown. 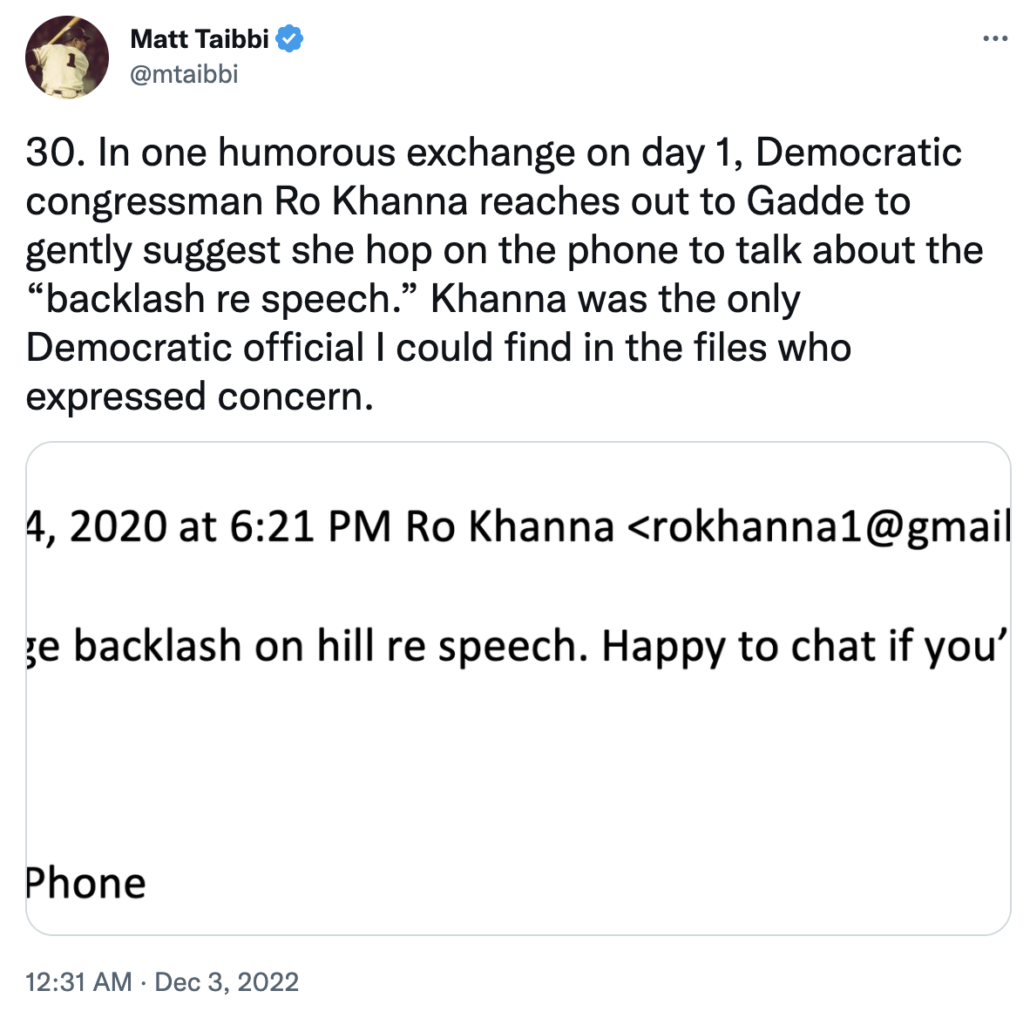 Three Tweets later, Tweet 33, Taibbi describes an emailed report from a research firm polling the response of congressional offices, including Democrat Judy Chu’s, describing that both Democrats, plural, and Republicans “were angry,” which sure seems like Taibbi missed at least one Democrat besides Khanna expressing concern. 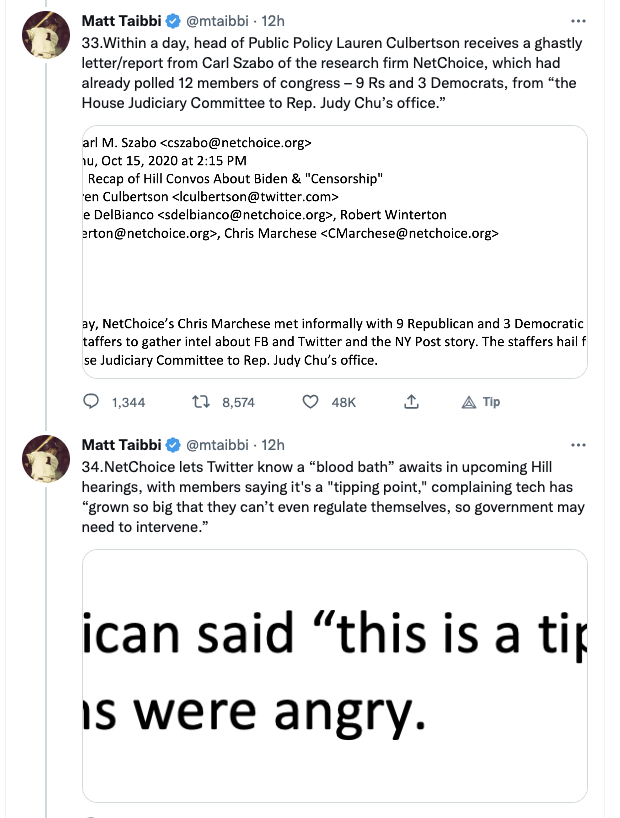 Ro Khanna, incidentally, was the leading recipient of donations from Twitter employees in 2022, almost 10% of the total, so to the extent Twitter employees disproportionately donate to Democrats, they’re funding Taibbi’s chosen voice of the First Amendment problems with Twitter’s decision.

The most telling part of Taibbi’s screed, however, is his complaint that when private entity “the Biden team” asked for some take-downs, Twitter obliged. 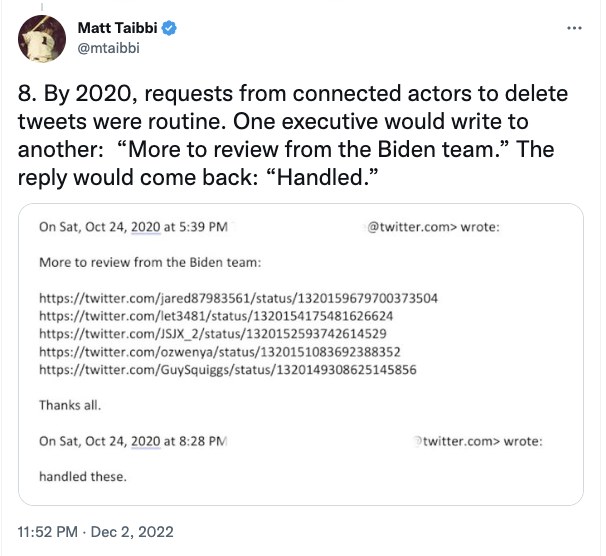 What Taibbi is complaining about is the way in which Twitter, the entity, always proved most responsive to high level requests.

He seems to think that damns pre-Elmo Twitter, when if anything, Elmo’s moderation decisions have far more dramatically reflected the whims of those with personal access, starting with Andy Ngo, who has personally gotten a bunch of anti-fascists banned from Twitter. If you have a problem with arbitrary, personalized moderation decisions, Elmo is the last guy you should be fronting for.

But there’s an even bigger problem with Taibbi’s smoking gun, the primary evidence he presents that the Biden crowd got special treatment of any kind.

Tabbi’s smoking gun amounts to takedown requests of stolen dick pics, precisely the kind of thing that content moderation should be responsive to.

That Matty Taibbi, of all people!, would shift subjects, after debunking the conspiracy theory of government pressure that started all this, to dick pics is fairly stunning. That’s because Taibbi is famously thin-skinned when people on Twitter talk about his own — unlike the Hunter Biden pictures, voluntarily exposed — dick exploits from when he lived in Russia. Every time someone on Twitter discusses what a misogynist slime Taibbi was in his Moscow days, he, suspected sock-puppets, and a few persistent Taibbi defenders show up to complain that people on Twitter are talking about what Taibbi did with his dick while under the influence overseas (or to claim it was all, even the misogynistic language, make-believe).

Taibbi was always a poor choice for an exposé based on primary sources.

But Taibbi is a particularly bad surrogate for Elmo to pick to complain about the takedowns of stolen dick pics.

Yet that, in episode one of what Elmo and Taibbi promise will be a series, is the best they’ve got.

Update: Matty Dick Pics wouldn’t tell his subscribers what conditions he had to agree to to peddle Elmo’s complaints about dick pics.

What I can say is that in exchange for the opportunity to cover a unique and explosive story, I had to agree to certain conditions.

While normal humans who denied Republicans their red wave were enjoying an epic sports weekend, an insular community of MAGA activists and online contrarians led by the world’s richest man (for now) were getting riled up about a cache of leaked emails revealing that the former actor James Woods and Chinese troll accounts were not allowed to post ill-gotten photos of Hunter Biden’s hog on a private company’s microblogging platform 25 months ago.

Now if you are one of the normals—someone who would never think about posting another person’s penis on your social media account; has no desire to see politicians’ kids’ penises when scrolling social media; doesn’t understand why there are other people out there who care one way or another about the moderation policies surrounding stolen penis photos; or can’t even figure out what it is that I’m talking about—then this might seem like a gratuitous matter for an article. Sadly, it is not.

I truly, truly wish I were joking.

Right-wing commentator Buck Sexton (real name), said this was a “bright red line violation” and that Biden should be IMPEACHED for it. Rep. James Comer (R-TN) was on Fox promising that everyone at Twitter involved with this would be brought before the House Oversight committee. Rep. Billy Long retweeted several MAGA influencers praising Elon for, among other things, “exposing corruption at the highest levels of society” (Projection Alert). Meanwhile Kari Lake hype man Pizzagate Jack Posobiec declared this the “biggest story in modern presidential election history,” claimed that “we can never go back to the country we were before this moment,” and donned this “a digital insurrection.”

In reality, all they really had was a digital erection.

“We Have a Plan. I’m with Rufio” … But the Government... Chrissie