Mueller’s team just announced (and announced the transfer, as I predicted) of the Russian hack indictment, naming 12 GRU officers for the hack of the Hillary campaign, the DNC, and the DCCC. This will be a working thread.

Rod Rosenstein, as he did with the Internet Research Agency, made clear there are no Americans named in this indictment (and that those who interacted with Guccifer 2.0 and DC Leaks did not know they were interacting with Russians). That said, here are some of the interesting nods in it.

The indictment names 12 officers — and (as conspiracy cases often do) — persons known and unknown to the Grand Jury.

This is a detail I’ve known for quite some time: Hillary’s campaign actually faced far more persistent hacking threats than previously known. Of absolutely critical importance, the indictment makes it clear that GRU hackers spear-phished Hillary’s personal office on July 27, after Donald Trump asked Russia to find her emails.

For example, on or about July 27, 2016, the Conspirators attempted after hours to spearphish for the first time email accounts at a domain hosted by a third-party provider and used by Clinton’s personal office. At or around the same time, they also targeted seventy-six email addresses at the domain for the Clinton Campaign.

I know a key witness in that part of the hack has been waiting to share his story (he’s quite happy this is finally out), so expect far more details on the targeting of the Hillary campaign itself, rather than just the DNC and DCCC, in coming days.

The indictment doesn’t name Wikileaks, but alleges that Guccifer 2.0 released additional stolen documents through a website maintained by “Organization 1.” There’s an entire section on communications between Guccifer 2.0 and Wikileaks (starting on page 17). Among other things it quotes Wikileaks as saying on July 6,

if you have anything hillary related we want it in the next tweo [sic] days prefabl [sic] because the DNC [Democratic National Convention] is approaching and she will solidify bernie supporters behind her after.

This makes it clear that WikiLeaks was not only working directly with Guccifer 2.0, but doing so in ways that would antagonize Bernie-supporting progressives.

The computer infrastructure (including computers in the US) here was paid for by cryptocurrency, not via payments laundered through the embassy (one of several claims about funding made in the Steele dossier).

The indictment names Ivan Sergeyovich Yermakov as the person who hacked into the DNC email server and stole the emails released via WikiLeaks. This hack date is critical to the timing of the narrative. The emails exfiltrated and provided to Wikileaks were stolen from May 25 through June 1.

Note, too, the indictment says hackers remained in the DNC computers through June.

The hackers used a server in AZ but then ran that through a server “overseas.” The hackers leased a DCCC computer in Illinois. The use of infrastructure within the US suggests much of the hot air around transfer times — one of the key attempts to debunk the hack — is just that, hot air.

The indictment gives the search terms for some of the targeted information. For example, on April 15, 2016, the conspirators searched for Hillary, Cruz, and Trump, as well as “Benghazi investigations.”

It describes a search on a server in Moscow for some of the terms used in the original Guccifer 2.0 post, including “some hundred sheets,” “illuminati,” “think twice about” “company’s competence” (referring to CrowdStrike).

The indictment describes Crowdstrike’s efforts to oust the hackers, but notes that a Linux based version of X-Agent remained on DNC’s network until October 2016.

I have been saying forever that the easiest way to steal the election would be to steal Hillary’s analytics. The indictment revals that,

In or around September 2016, the Conspirators also successfully gained access to DNC computers hosted on a third-party cloud-computing service. These computers contained test applications related to the DNC’s analytics. After conducting reconnaissance, the Conspirators gathered data by creating backups, or “snapshots,” of the DNC’s cloud-based systems using the cloud provider’s own technology.

The indictment is silent about what happened to this stolen analytics data.

The indictment notes that DCLeaks also released emails of Republicans that were hacked in 2015 (though I think it actually included some that were more recent than that).

Alice Donovan pitched news articles to various outlets. It was also the name used for DC Leaks’ Facebook account. This name (and a few others in the indictment) connects the hack and leak with the wider disinformation campaign.

The indictment describes how a candidate for Congress asked for information. I think I know who this is, but need to check.

It describes Guccifer 2.0 providing documents to Aaron Nevins, which I have covered repeatedly.

And it describes a journalist who obtained Black Lives Matters documents. As his DMs make clear, this was then Breitbart and current Sputnik journalist Lee Stranahan. 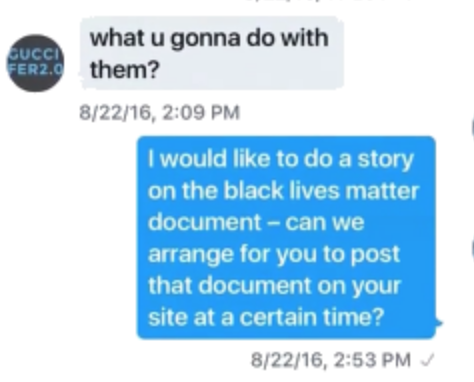 Stranahan is the journalist who helped Roger Stone write the column claiming that Guccifer 2.0 was an American. 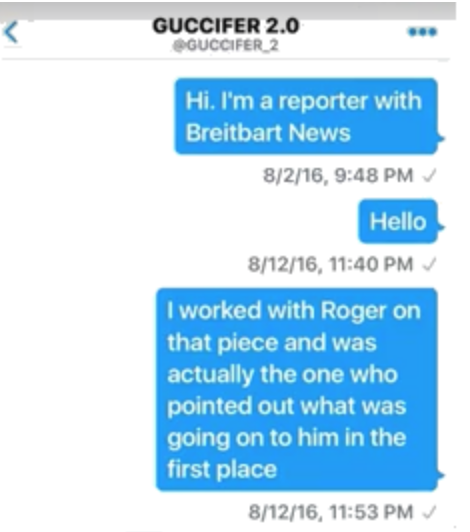 The language describing the efforts to hack state sites, starting on page 25, is very specific, down to the named GRU officer. It describes Kovalev stealing the information of 500,000 voters (this is probably from Illinois).

Note, the indictment describes Kovalev deleting information in response to an FBI alert on the hacks of the state server. It doesn’t say whether he did so in response to public reporting on it.

March 2016: Yermakov spearphishes two accounts that would be leaked to DC Leaks

March 14, 2016 through April 28, 2016: Conspirators use same pool of bitcoin to purchase VPN and lease server in Malaysia

May 30, 2016: Malyshev upgrades the AMS (AZ) server, which receives updates from 13 DCCC and DNC computers

June 2016: Conspirators staged and released tens of thousands of stolen emails and documents

June 10, 2016: Ike Kaveladze has calls with Russia and NY while still in NYC

June 15, 2016, between 4:19PM and 4:56 PM Moscow Standard Time (9:19 and 9:56 AM ET): Conspirators log into Moscow-based sever and search for words that would end up in first Guccifer 2.0 post, including “some hundred sheets,” “illuminati,” “think twice about company’s competence,” “worldwide known”

June 15 adn 16, 2016: Ike Kaveladze places roaming calls from Russia, the only ones he places during the extended trip

June 22, 2016: Wikileaks sends a private message to Guccifer 2.0 to “send any new material here for us to review and it will have a much higher impact than what you are doing.”

July, 2016: Kovalev hacks into IL State Board of Elections and steals information on 500,000 voters

July 6, 2016: Wikileaks writes Guccifer 2.0 adding, “if you have anything hillary related we want it in the next tweo [sic] days prefabl [sic] because the DNC [Democratic National Convention] is approaching and she will solidify bernie supporters behind her after”

July 18, 2016: WikiLeaks confirms it has “the 1Gb or so archive” and would make a release of stolen documents “this week”

July 27, 2016: After hours, conspirators attempt to spearphish email accounts at a domain hosted by third party provider and used by Hillary’s personal office, as well as 76 email addresses at Clinton Campaign

August 15, 2016: Conspirators receive request for stolen documents from candidate for US congress

January 12, 2017: Conspirators falsely claim the intrusions and release of stolen documents have “totally no relation to the Russian government”