As the Summit Arrives, Keep in Mind that Putin Manages Trump with Carrots and Sticks

In my post revealing that I went to the FBI with information about someone who played a significant role in Russia’s attack on US elections, I revealed that the person sent me a text less than 15 hours after polls closed indicating Trump had ordered Mike Flynn to start working on Syrian issues.

Both Jared Kushner’s public statement and Mike Flynn’s anonymous confidant’s comments corroborate that Trump focused on Syria immediately after the election. I have taken from that that conceding to Russian plans to leave Bashar al-Assad in place is one of the payoffs Trump owed Putin for help winning the election.

For that reason, I want to look at the Shadow Brokers Don’t Forget Your  Base post, posted on April 9, 2017, just three days after Trump retaliated against Syria for a chemical weapons attack on civilians. It was the first post after Shadow Brokers had announced he was going away on January 12 (which, I now realize, was the day after the Seychelles meeting set up a back channel with Russia through Erik Prince). It preceded by days the Lost in Translation post, which released powerful NSA hacking tools that would lead directly to the WannaCry malware attack in May. And while the Don’t Forget Your Base post did release files, it was mostly about messaging.

That messaging included a bunch of things. Among other things (such as that Trump shouldn’t have fired Steve Bannon and should refocus on his racist domestic policies), the post argues that Trump should just own up to Russia helping Trump win the election.

It talks about what the people who got Trump elected expect.

TheShadowBrokers isn’t not fans of Russia or Putin but “The enemy of my enemy is my friend.” We recognize Americans’ having more in common with Russians than Chinese or Globalist or Socialist. Russia and Putin are nationalist and enemies of the Globalist, examples: NATO encroachment and Ukraine conflict. Therefore Russia and Putin are being best allies until the common enemies are defeated and America is great again.

And it argues (in a thoroughly muddled description of what happened) that Trump shouldn’t have bombed Syria.

Because from theshadowbrokers seat is looking really bad. If you made deal(s) be telling the peoples about them, peoples is appreciating transparency. But what kind of deal can be resulting in chemical weapons used in Syria, Mr. Bannon’s removal from the NSC, US military strike on Syria, and successful vote for SCOTUS without change rules?

Mr Trump, we getting it. You having special empathy for father whose daughter is killed. We know this is root cause for anti-illegal immigrant policy. Illegal immigrant shoot man’s daughter in San Francisco. Now is Syrian man daughter killed by chemical gas. We agree its needless tragedy. But tragedies happening everyday and wars endangers all the children not just Syrian.

There is, admittedly, a lot going on here, even ignoring that it sounds like a batshit insane rant.

But is also that case that Shadow Brokers had gone away in the transition period. And then shortly after Trump bombed Syria, he came back, and very quickly released tools he had threatened to release during the transition period. The release of those tools did significant damage to the NSA (and its relations with Microsoft and other US tech companies) and led directly to one of the most damaging malware attacks in history.

It is my opinion that Russia manages Trump with both carrots — in the form of election year assistance and promises of graft — and sticks — in this case, in the form of grave damage to US security and to innocent people around the world. 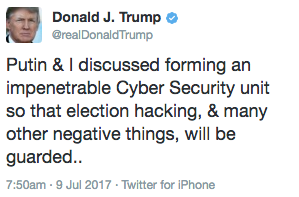 And Trump is poised to head into a meeting with Vladimir Putin on Monday — showing no embarrassment about the proof laid out yesterday that without Putin, Trump wouldn’t have won the election — to discuss (among other things) a deal on Syria.

Meanwhile, Trump’s own Director of National Intelligence, Dan Coats, says the lights are blinking red like they were in advance of 9/11.

Director of National Intelligence Dan Coats raised the alarm on growing cyberattack threats against the United States, saying the situation is at a “critical point” and coming out forcefully against Russia.

“The warning signs are there. The system is blinking. It is why I believe we are at a critical point,” Coats said, addressing the Hudson Institute in Washington, DC, on Friday.

“Today, the digital infrastructure that serves this country is literally under attack,” he said.
Coats compared the “warning signs” to those the United States faced ahead of the September 11 terrorist attacks.

This is why I came forward two weeks ago to talk about how quickly someone involved in the election attack learned of Trump’s policy shift on Syria. I believe Trump is cornered — has allowed himself to be cornered. And in spite of everything, Trump is prepared to go alone into a meeting on Monday with Vladimir Putin — the guy wielding both carrots and sticks against Trump — and make a deal.

Everyone is worried that Putin might release a pee tape. I think what Putin holds over Trump may be far more serious. And if something happens, know that there’s good reason to believe Trump brought it on the country himself, willingly.

Yesterday, Roger Stone Answered, then Backtracked, on a Question Mueller Has... Hybrid or Ambiguous, Asymmetric Warfare is Here to Stay