It took a day for the President to complain after his former campaign manager, having spent the week proffering up testimony, flipped on Friday. When he did, Trump tied the Mueller investigation to polls (and upcoming midterm elections) for the first time in a Tweet. 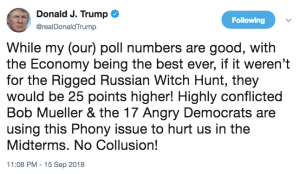 Of course, his freebie legal PR hack, Rudy Giuliani has been tying midterms to the investigation for some time in his insistence that no indictments can come between now and then. Rudy should be happy, then, that Paul Manfort’s plea avoids a four week trial for Trump’s campaign manager right in the middle of election season.

I mean, at first, Rudy put a brave face on things Friday, claiming,

Once again an investigation has concluded with a plea having nothing to do with President Trump or the Trump campaign. The reason: the President did nothing wrong and Paul Manafort will tell the truth.

But almost immediately after making that statement, Rudy took out the part about Manafort telling the truth.

Roger Stone, who’s shrewder than Rudy, immediately suggested anything Manafort may be saying (or may already have said) implicating him would be a lie.

I am uncertain of the details of Paul’s plea deal but certain it has no bearing on me since neither Paul Manafort or anyone else can testify truthfully that I am involved in Russian collusion, WikiLeaks collaboration or any other illegal act pertaining to the 2016 election.

Though of course, Stone’s seeming awareness that Mueller might pursue Manafort testimony about Stone reveals his brave comment for the lie it is.

I’m more interested, however, in Rudy’s (and John Dowd’s) apparent desperation to stave off a mass prisoner’s dilemma.

Manafort first proffered testimony Monday, September 10. Rudy was still boasting about how much he knew about Manafort’s thinking for a Thursday Politico story — though he based that off conversations before and after the EDVA trial, which had ended three weeks earlier.

Giuliani also confirmed that Trump’s lawyers and Manafort’s have been in regular contact and that they are part of a joint defense agreement that allows confidential information sharing.

“All during the investigation we have an open communication with them,” he said. “Defense lawyers talk to each other all the time, where, as long as our clients authorize it, therefore we have a better idea of what’s going to happen. That’s very common.”

Giuliani confirmed he spoke with Manafort’s lead defense lawyer Kevin Downing shortly before and after the verdicts were returned in the Virginia trial, but the former mayor wouldn’t say what he discusses with the Manafort team. “It’d all be attorney-client privilege, not just from our point of view but from theirs,” he said.

Despite Manafort’s having led the campaign, the White House has sought to distance itself from him and his case.

“This had absolutely nothing to do with the president or his victorious 2016 presidential campaign,” press secretary Sarah Huckabee Sanders said Friday. “It is totally unrelated.”

Trump’s personal lawyer Rudy Giuliani echoed that idea, adding that “the president did nothing wrong.”

But the NPR version includes this correction.

Editor’s note: An early version of this story published before all the court documents in the case were available contained a characterization from a person familiar with the case that said Manafort’s cooperation would be limited. When charging documents and other materials appeared, they did not support that and the characterization was removed.

And the Politico noted how quickly Rudy backed off his claim that Manafort would testify truthfully.

Of course, anyone who has read the plea agreement closely — up to and including the government’s ability to declare Manafort in breach of the agreement with only a good faith rather than preponderance of the evidence standard —

— and it’s clear that if Mueller’s team wants Manafort to testify about Trump, he will.

Meanwhile, Rudy is yelling on Twitter that the morning shows aren’t taking his word about what Manafort is testifying about over what the clear text of the plea agreement suggests. 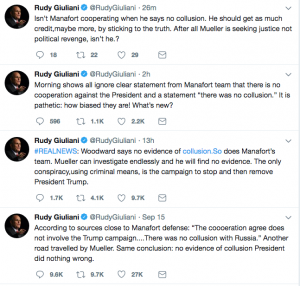 I’m more interested still that John Dowd emailed the lawyers for the (reportedly 37, though the number is likely smaller now) other witnesses in the Joint Defense Agreement, claiming outlandishly that Manafort has no evidence on Trump. 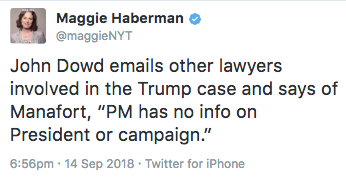 The President’s lawyers — the one who currently “works” for him for “free” and the one who allegedly doesn’t work for him anymore but recently got lionized in Woodward’s book as his main source about the Mueller investigation, and in that role was shown to be either an idiot or a fantasist, that the “free” one cites to claim that Woodward exonerates the President — are working very hard to convince others that Manafort’s plea deal doesn’t mean the calculation both other witnesses and the Republican party have been making has to change.

They’re trying to stave off an awful game of prisoner’s dilemma.

Consider if you’re one of the other 37 (which might be down to 34 given known cooperators, or maybe even fewer given how uncertain Rudy seems to be about Don McGahn’s third session of testimony) members of the Joint Defense Agreement, especially if you’re one who has already testified before the grand jury about matters that Manafort (and Gates) might be able to refute. So long as there’s no chance Trump will be touched, you’re probably still safe, as you can count on Trump rewarding those who maintain the omertà or at the very least working to kill the Mueller inquiry shortly after the election.

So each of 37 (or maybe just 30) people are considering whether they have to recalculate their decisions about whether to remain loyal to the President or take care of themselves.

Meanwhile, there’s the Republican party. Admittedly, the Republicans are unlikely to do anything until they rush through Brett Kavanaugh’s confirmation, even if doing so without first inquiring about the allegation that he assaulted a girl when he was in high school will damage their electoral prospects with women in November.

But once they’ve got Kavanaugh confirmed (assuming no big news breaks in the Mueller investigation before that), then the calculation may change. Right now, a lot of Republicans believe they have to stick with Trump through the election, if only to ensure the GOP base turns out. But if Trump’s poll numbers continue to sink — and as the numbers of those who strongly disapprove of Trump continue to grow — Republicans in certain kinds of districts (especially suburbs) will have an incentive to distance themselves from the President.

All that’s a straight calculation based on whether Trump will help or hurt more, come November. But the Republican party, from Trump’s endless repetition of “no collusion;” to Devin Nunes’ naked attempt to obstruct the Mueller investigation; to Chuck Grassley and Lindsey Graham’s referral of Christopher Steele rather than Don Jr for perjury charges; to Mark Meadows’ latest attempts to turn Lisa Page and Peter Strzok’s attempts to chase down someone leaking about Carter Page into a suggestion they themselves leaked; to Richard Burr’s cynical boasts that his committee hasn’t found stuff they wouldn’t chase down if they had been told of it, has invested everything on a gamble that Trump was telling the truth (or, more cynically, that he could stave off discovery of any conspiracy he entered into with Russia).

Republicans have invested a whole lot into attempting to give the President a clean bill of health.

Meanwhile, his campaign manager — a guy many of them have worked with — is presumably now doing the opposite, telling Mueller precisely what the Republicans have been working so hard to suppress for 18 months.

At some point, the ones who have been playing along even while admitting that the President probably did conspire with Russia (I know of some who believe that’s likely), will make their move.

If the GOP were less dysfunctional, they’d do it sooner rather than later, cut their losses with Trump to try to salvage the Pence presidency (whom they like far more anyway). But for now, that calculation of whether or not to do so is likely happening in private.

I’m in no way promising Manafort’s plea deal will set off two parallel floods of rats fleeing the Trump JDA or his presidency generally. These are Republicans, after all, and I’m sure they still would prefer obstructing the whole thing away.

I don’t think a mass abandonment of Trump is going to happen anytime soon.

But Trump’s lawyers do seem worried that could happen.

Trump needs his fellow Republicans to believe that Paul Manafort isn’t providing evidence that incriminates him. Because if they start to believe that, their calculations behind support for him may change, and change quickly.