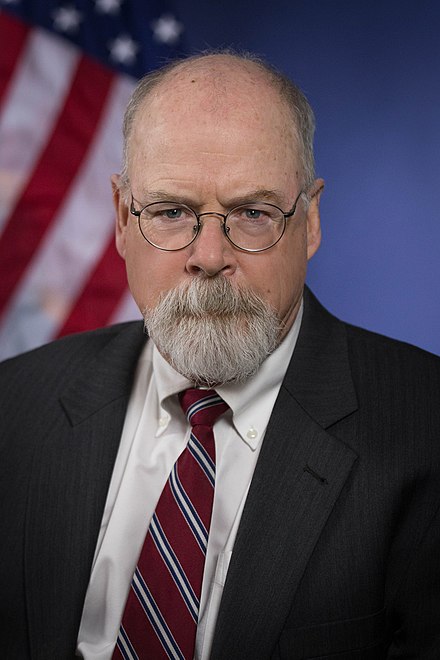 Yesterday, a sick man called into Maria Bartiromo’s show and wailed that his opponents had not been indicted.

Bartiromo: Mr. President. We now know from these documents that John Ratcliffe unveiled that it was Hilary Clinton’s idea to tie you to Russia in some way. It was successful. The whole country was talking about it for two and a half years. But what comes next, Mr. President? We can have all of these documents, we can see exactly what happened but unless John [Durham] comes out with a report or indictments unless Bill Barr comes out with a — a — some kind of a ruling here, do you think this is resonating on the American people?

Trump: Unless Bill Barr indicts these people for crimes, the greatest political crime in the history of our country, then we’re going to get little satisfaction unless I win and we’ll just have to go, because I won’t forget it. But these people should be indicted, this was the greatest political crime in the history of our country and that includes Obama and it includes Biden. These are people that spied on my campaign and we have everything. Now they say they have much more, OK? And I say, Bill, we’ve got plenty, you don’t need any more. We’ve got so much, Maria, even — just take a look at the Comey report, 78 pages of kill, done by Horowitz, and I have a lot of respect for Horowitz, and he said prosecute. He recommended prosecute and they didn’t prosecute. I was — I couldn’t believe it, but they didn’t do it, because they said we have much bigger fish to fry. Well, that’s OK, they indicted Flynn for lying and he didn’t lie. They destroyed many lives, Roger Stone, over nothing. They destroyed lives. Look at Manafort, they sent in a black book, it was a phony black book, phony, they made up a black book of cash that he got from Ukraine or someplace and he didn’t get any cash.

In the comment, he described speaking directly to Billy Barr about the urgency of prosecuting his political opponents.

In response to this attack, Billy Barr has started telling Republican members of Congress that John Durham isn’t going to indict before the election.

Attorney General Bill Barr has begun telling top Republicans that the Justice Department’s sweeping review into the origins of the Russia investigation will not be released before the election, a senior White House official and a congressional aide briefed on the conversations tell Axios.

Why it matters: Republicans had long hoped the report, led by U.S. Attorney John Durham, would be a bombshell containing revelations about what they allege were serious abuses by the Obama administration and intelligence community probing for connections between President Trump and Russia.

Barr is excusing the delay by saying that Durham is only going to prosecute stuff he can win.

What we’re hearing: Barr is communicating that Durham is taking his investigation extremely seriously and is focused on winning prosecutions.

This back and forth represents a fundamental misunderstanding of what must be going on.

The Durham investigation should not, at this point, be considered separately from the Jeffrey Jensen investigation attempting to invent a reason to blow up the Flynn prosecution. That’s been true since Barr appointed Jensen because Durham hadn’t yet discovered anything to dig Sidney Powell out of the hole she had dug Flynn. But it’s especially true now that documents that would be central to the Durham inquiry are being leaked left and right — whether it’s the report that the FBI knew that Igor Danchenko had been investigated (like Carter Page and Mike Flynn) as a possible Russian agent, or specific details about when the FBI obtained NSLs on Mike Flynn.

The investigative integrity of the Durham investigation has been shot beyond recovery.

Plus, the sheer desperation of the Jensen investigation raises real questions about whether a credible investigation could ever find anything that could sustain a prosecution, in any case. That’s because:

Jensen is working from the same evidence that Durham is. And what the Jensen investigation has shown is that it takes either willful ignorance or deliberate manipulation to spin this stuff as damning. And in the process, Jensen has destroyed the viability of a witness and possibly other pieces of evidence that any credible prosecution would use.

DOJ might make one last bid in giving Trump what he wants, allegations against his adversaries, by using the initial response in the McCabe and Strzok lawsuits as a platform to make unsubstantiated attacks on them (DOJ got an extension in both cases, but one that is still before the election). But those attacks will crumble just like the Jeffrey Jensen case has, and do so in a way that may make it easier for McCabe and Strzok to get expansive discovery at the underlying actions of people like Barnett.

Billy Barr has largely shot his wad in drumming up accusations against Trump’s critics. And along the way, he has proven how flimsy any such claims were in the first place.