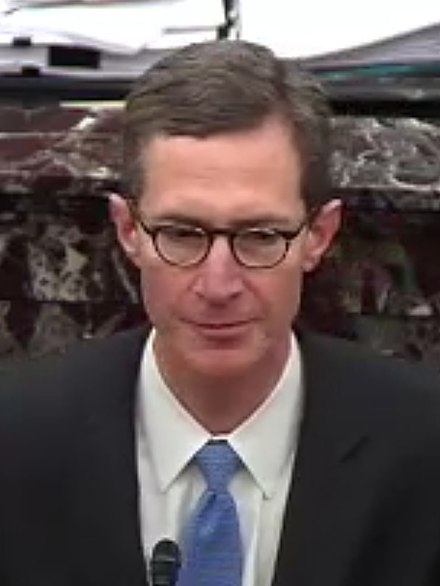 Back on August 11, I predicted that Pat Philbin would have been one of the witnesses whom DOJ interviewed in advance of the search of Trump’s golf resort.

Pat Philbin is likely the lawyer described in earlier reports who attempted, but failed, to negotiate transfer of Trump’s stolen documents to the Archives.

Longtime Archives lawyer Gary Stern first reached out to a person from the White House counsel’s office who had been designated as the President Records Act point of contact about the record-keeping issue, hoping to locate the missing items and initiate their swift transfer back to NARA, said multiple sources familiar with the matter. The person had served as one of Trump’s impeachment defense attorneys months earlier and, as deputy counsel, was among the White House officials typically involved in ensuring records were properly preserved during the transfer of power and Trump’s departure from office.

But after an extended back and forth over several months and after multiple steps taken by Trump’s team to resolve the issue, Stern sought the intervention of another Trump attorney last fall as his frustration mounted over the pace of the document turnover.

If Philbin was the person who tried but failed to resolve the Archives’ concerns, he is a direct, material witness to the issue of whether Trump had willfully withheld classified documents the Archives was asking for, something the Archives would have made clear in its referral to DOJ. And because of the way the Espionage statute is written (note the Newsweek article, if accurate, mentions National Defense Information, language specific to the Espionage Act), Philbin would have personal legal exposure if he did not fully disclose information about Trump continuing to hoard stolen classified documents. Plus, Philbin has been involved in national security law since the 00s, and probably would like to retain his clearance to represent clients in national security cases.

Yesterday, Maggie Haberman confirmed that I was correct (and also reported that Pat Cipollone was also interviewed; Cipollone may have been the lawyer the Archives called after Philbin failed to get Trump to return the documents).

Mr. Philbin was interviewed in the spring, according to two of the people familiar with the matter, as investigators reached out to members of Mr. Trump’s circle to find out how 15 boxes of material — some of it marked as classified — made its way to Mar-a-Lago. It was unclear when Mr. Cipollone was interviewed.

Mr. Cipollone and Mr. Philbin were two of Mr. Trump’s representatives to deal with the National Archives; they were named to the positions shortly before the president’s term ended, in January 2021. Another was Mark Meadows, the former White House chief of staff.

At some point after National Archives officials realized they did not have Trump White House documents, which are required to be preserved under the Presidential Records Act, they contacted Mr. Philbin for help returning them.

A spokesperson for Mr. Philbin did not immediately respond to a request for comment.

Mr. Philbin tried to help the National Archives retrieve the material, two of the people familiar with the discussions said. But the former president repeatedly resisted entreaties from his advisers.

“It’s not theirs, it’s mine,” several advisers say Mr. Trump told them.

For the reasons I laid out above, it’s unsurprising that FBI interviewed Philbin (and Cipollone, if he is the other lawyer NARA appealed to). This was a referral from NARA, and they would have explained to FBI what CNN explained in February: that NARA had worked patiently with Philbin, but that Philbin failed to persuade Trump to comply with the Presidential Records Act.

Philbin’s early role in DOJ’s investigation is complicated, however, because the investigation implicates (at least!) three legal relationships Philbin has had with Trump:

Philbin’s ethical obligations and legal exposure from all three of those relationships are different, but knowledge gained from all three positions would be of acute interest to the FBI.

Plus, Philbin has a deep background in national security law from the George W. Bush Administration. He played a key role in the review of John Yoo’s shoddy OLC memos and the related hospital confrontation between Jim Comey and Dick Cheney. Particularly after NARA referred the issue to FBI, it wouldn’t take long for Philbin to have appreciated the problem posed by all those unprotected files sitting in a closet in a golf resort targeted by foreign intelligence services. Nor would Philbin miss the legal gravity under the Espionage Act — for Trump, as well as for anyone who conspired with the person refusing to return stolen classified documents — implicated by Trump’s refusal to turn over what he had taken. And as a lawyer with at least another decade of private practice before him, I imagine Philbin would want to keep his clearance.

Those factors are important because Philbin knows why the bodies are buried — the decision-making process Trump used to handle classified information and the rationale Trump gave him during the period when Philbin was trying to negotiate the documents’ return.

Philbin may not have recent knowledge of where the bodies are buried: where Trump stored documents at Mar-a-Lago. But because he tried to chase these documents down in 2021, he would have a general understanding of what Trump’s storage practices were until such time as someone else inherited the problem, including whether they complied with CFR rules about minimum standards for storing classified documents (DOJ told Trump in June that they did not).

He would have a general idea of what bodies are buried. Because he tried to negotiate their return over the course of months, he would know the general scope of the documents Trump took with him in 2020 and may well have specific knowledge of individual documents NARA identified to be missing. He may know, for example, about specific documents that Trump was particularly opposed to returning. Speaking just hypothetically, that could even include the full transcript of that Perfect Phone Call that Philbin’s office had helped to keep out of the hands of Congress, potentially a violation of 18 USC 1519. It might also include documents Philbin saw in the lead-up to January 6, documents that would have been responsive to the known January 6 Committee subpoenas to NARA for Trump’s records. That means Philbin is among the people who may have been able to confirm to the FBI that documents excluded from the 15 boxes returned earlier this year were at Mar-a-Lago during the period he was negotiating their return. Such information is the kind of thing that the FBI would have included in the subpoena to search MAL.

But the most important thing that Philbin would know from his various interactions with Trump has to do with motive: Why the bodies got buried. Maggie quotes several advisers, possibly including one or both of the two Pats, that Trump told them, “It’s not theirs, it’s mine.” And it may be that’s the only motivation Trump ever expressed to Philbin. Trump is such a narcissist he really may just verbalize his theft of these documents by claiming ownership. But Philbin had firsthand knowledge of other efforts to withhold materials, as evidenced by the Perfect Phone Call transcript. He likely knows of Trump’s habit of ripping up burning eating or flushing damning documents. Philbin was still trying to get Trump to return documents after the time the January 6 Committee was convened, so Trump may have stated to Philbin what Paul Sperry claimed yesterday: that the reason Trump is withholding documents is because he knows NARA is legally obligated to share those documents with J6C.

Given the complex ethical issues he’d face, Philbin might not have been able or willing to share some of what he knows with the FBI, at least not at first. But the risks of an Espionage Act and obstruction investigation, including 18 USC 793g, which can be used to charge anyone involved in refusing to return classified documents even if they don’t share the motive of refusing to return them, might change Philbin’s ethical calculus. An experienced NatSec lawyer like Philbin would know that the Espionage Act carries an affirmative obligation to give classified documents back, particularly if their lawful owner, NARA, has asked. Once FBI got involved, Philbin would want to avoid any legal liability for his failure to convince Trump to comply, and Trump’s continued failure to comply would be a crime that might give Philbin the ethical leeway to do that.

When NARA asked Philbin to help them get those documents back, Philbin failed. That puts him in situation where he may have real incentive to explain both what Trump said to explain his refusal to comply with the Presidential Records Act, but also what, in Philbin’s personal knowledge gained two years as Deputy WHCO, several months during an impeachment defense, and much of a year as Trump’s NARA representative, Trump did when he took steps to make documents covered by the PRA unavailable to the NARA.

Update: As you consider the import of Philbin’s testimony, consider the significance of this reference in the government opposition to further unsealing of the Trump warrant.

Disclosure of the government’s affidavit at this stage would also likely chill future cooperation by witnesses whose assistance may be sought as this investigation progresses, as well as in other high-profile investigations.

There Are 5,000 More Like Ricky Shiffer Women Led The Move To Farming