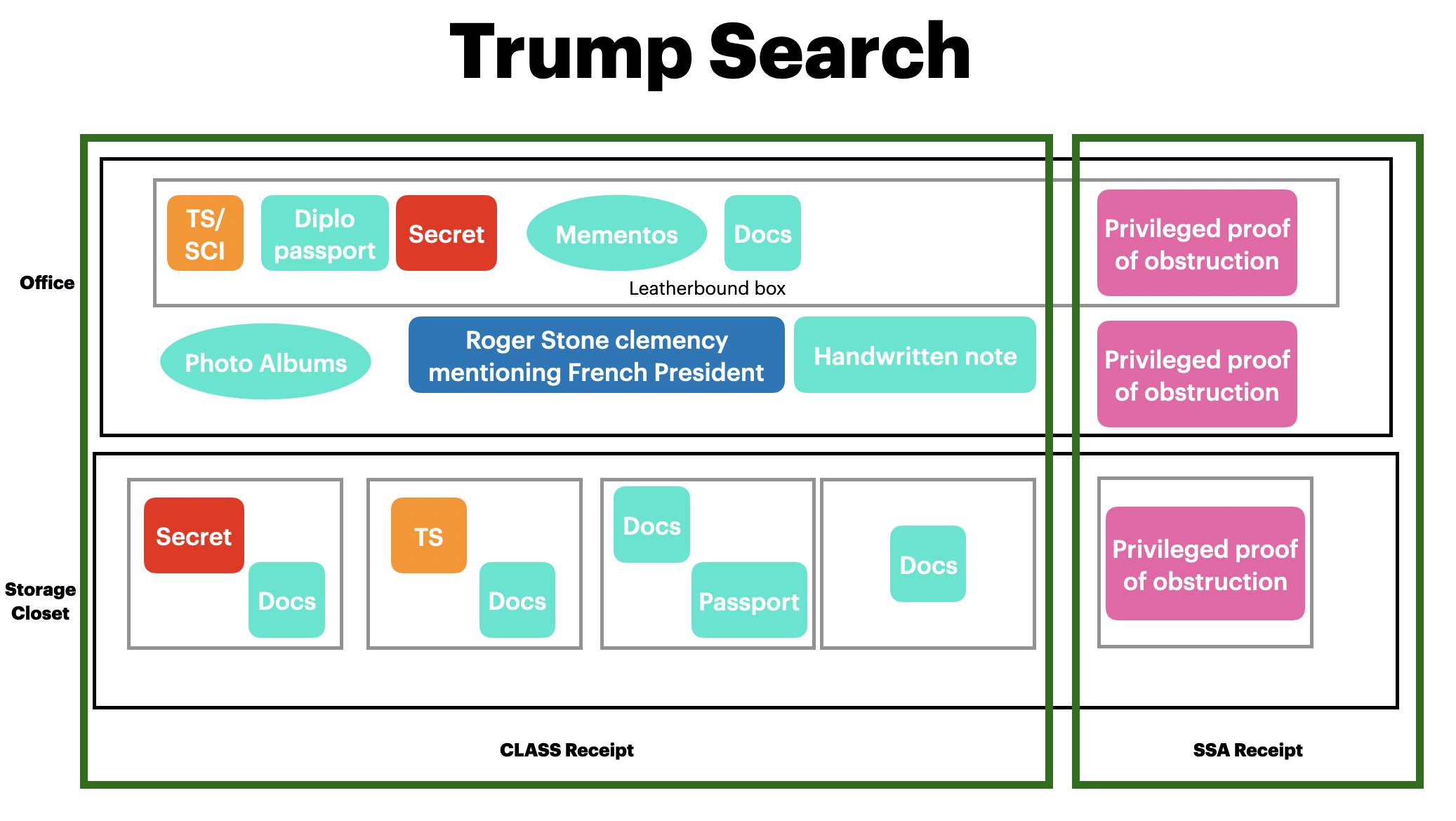 As I’ve written in the past, there are several different theories about how DOJ is applying the obstruction statute, 18 USC 1519, in its investigation into Trump’s stolen documents. Three possibilities have been floated:

The differences are subtle, but important for assessing how significant Trump’s legal exposure on this count might be.

Two details revealed yesterday seem to rule out theory 3, that DOJ is investigating Trump for obstructing the Archives’ work.

The search authorization tied to obstruction in the warrant was vague, permitting FBI to collect evidence of the knowing alteration, destruction, or concealment of any Presidential or classified documents.

Any evidence of the knowing alteration, destruction, or concealment of any government and/or Presidential Records, or of any documents with classification markings.

That left open the possibility DOJ was investigating Trump’s obstruction of the Archives generally.

But the cover page unsealed yesterday described obstruction to apply to a federal investigation.

Also, at the hearing on unsealing the affidavit in Palm Beach, DOJ’s head of counterintelligence Jay Bratt raised Trump’s suspected obstruction to highlight the danger that unsealing the warrant affidavit would pose a risk to witnesses.

A Justice Department lawyer said during the hearing that the probable cause affidavit used to get a warrant described how prosecutors might find “evidence of obstruction” on the grounds of the Florida property — a possible crime that the search warrant itself revealed was under investigation. “In this case, the court has found probable cause there’s a violation of one of the obstruction statutes, and that evidence of obstruction would be found at Mar-a-Lago” said Jay Bratt, who heads the Justice Department’s counterintelligence section. Obstruction of justice was one of the three statutes listed on the search warrant for Mar-a-Lago, which was unsealed last week, and Reinhart said during the hearing Thursday that he “found there is probable cause” that the statutes had been violated. Bratt made the comments about obstruction being investigated while he was trying to highlight DOJ’s fear that future witnesses may not be willing to provide information if too much was to come out about the investigation so far.

Both these details — the description on the warrant cover page and Bratt’s own comments — seem to make it clear that DOJ is investigating obstruction of an investigation, not just the Archives’ ordinary work.

Bratt’s comments strongly suggest that the obstruction prong is about efforts to obstruct this investigation.

Three things still suggest it may be broader than that, though.

First, as I’ve noted, the earliest reporting on the criminal referral described two things that would be criminal: retaining classified documents and ripping, burning, or flushing them.

The National Archives and Records Administration has asked the Justice Department to examine Donald Trump’s handling of White House records, sparking discussions among federal law enforcement officials about whether they should investigate the former president for a possible crime, according to two people familiar with the matter.

The referral from the National Archives came amid recent revelations that officials recovered 15 boxes of materials from the former president’s Mar-a-Lago residence in Florida that were not handed back in to the government as they should have been, and that Trump had turned over other White House records that had been torn up. Archives officials suspected Trump had possibly violated laws concerning the handling of government documents — including those that might be considered classified — and reached out to the Justice Department, the people familiar with the matter said.

Trump’s years-long defiance of the Presidential Records Act, which requires the preservation of memos, letters, notes, emails, faxes and other written communications related to a president’s official duties, has long raised concerns among historians and legal observers. His penchant for ripping up official documents was first reported by Politico in 2018, but it has drawn new scrutiny in recent weeks because of a House select committee’s investigation of the Jan. 6, 2021, attack on the U.S. Capitol.

The Washington Post reported late last month that some of the White House records the National Archives turned over to the committee appeared to have been torn apart and then taped back together. The Post later found — and the Archives confirmed — that officials had recovered 15 boxes of presidential records from Mar-a-Lago. [my emphasis]

This reporting suggests that Trump’s efforts to destroy documents — including documents pertinent to investigations of January 6 that started the day of the attack — were part of the Archives’ referral from the start, before Trump had an opportunity to start obstructing this investigation.

In that case, the initial referral would have implicated obstruction of other investigations. And it might not be limited to those ripped up documents provided to the January 6 Committee.

As I laid out, there are multiple known examples where Trump or his aides or his lawyers destroyed or withheld evidence from then-ongoing investigations. So if DOJ were investigating under theory 2, it might provide a way to reopen those earlier investigations under extended statutes of limitation tied to his theft of documents.

Then there are the two receipts, just one of which (if you can believe Fox News) is known to record the seizure of attorney-client privileged materials. There are five boxes plus some other documents on that receipt. It may be that the only distinguisher is attorney-client materials, but if it’s more than that, five boxes is far too much material to relate exclusively to this investigation.

Finally, there’s the statute used, 18 USC 1519 instead of 18 USC 1505, which includes obstructing committee proceedings, or 18 USC 1512, which includes witness tampering and (as applied in the January 6 context) otherwise obstructing a proceeding. A recent SCOTUS decision, Yates v. US, limits the application of 1519 (the one named in the warrant) to evidence, not fish. It squarely applies to things like Presidential Records. But because of that recent ruling, DOJ is not going to try to stretch the bounds of 1519 with the former President. If they were ever to charge Trump with witness tampering — the concern Bratt raised — or more amorphous kinds of obstruction, it would be under 18 USC 1512.

And thus far at least, the obstruction of this current investigation that has been publicly reported has been limited to lying and hiding. Hiding the documents by moving them out of the closet DOJ was about to inspect absolutely qualifies as “concealing” Presidential Records and the lying served that purpose as well. But the FBI was authorized to seize documents more broadly than that, including those that were altered or destroyed (as ripping, flushing, burning, or eating would do). The documents we know Trump has ripped, flushed, burned or eaten were evidence in other investigations, not (thus far at least) this one.

That said, the way in which DOJ refers to 18 USC 2071 in this warrant — removing or concealing records — might suggest DOJ is focusing on that, the concealment of records.

It seems increasingly likely DOJ is investigating Trump’s obstruction of investigations (rather than the normal functions of the Archives). It’s just not clear, yet, which investigations are included in the scope.

Update: I realized something as I was revising this post on the likely contents of the Trump search warrant affidavit: Trump originally withheld the SharpieGate map in which he lied about the path of Hurricane Dorian. That in and of itself would be proof Trump altered or concealed evidence in an investigation, because the Commerce Department Inspector General did a report on the pressure to uphold Trump’s false claims.